Japan, from the ashes of Hiroshima to world’s third largest economy (Part1)

Japan today is the world’s third largest economy, but this position has not been attained easily. Japan was one of the losers of World War II and suffered heavy losses during the war. It is the only country that has been the victim of a nuclear bomb. But the losses and pressures did not disappoint the hardworking Japanese who joined hands to build their country anew.

The Fukushima Nuclear Power Plant suffered major damage in March 2011 when a 9.0-Richter earthquake and tsunami hit Japan. The Japanese once again demonstrated the same morale and spirit they had shown in the immediate post-war era when their nuclear power plants were damaged.They decided to rebuild Fukushima better than in the past.
There are certain elements behind this determination and morale. Discipline is an important element in the Japanese culture. Another element is dedication to work. However, these two personality traits are nurtured in the family, school and society, where Japanese culture and tradition confluence with the features of modernity, paving the way for the circulation of those traditional values in the body of this modern society.
I visited Japan from Nov. 5 to 13. I visited several places, offices, and talked to officials. On the basis of my observations, there are four pillars that consolidate the above-mentioned personality traits: school, family, traditions and government. The role of these pillars will be discussed in a series of articles in this column. 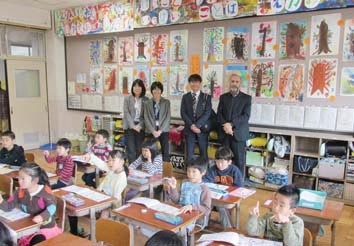 School plays a major role in disciplining Japanese citizens from early childhood. The education system in Japan is sub-divided into pre-school, elementary school, junior-high school, high school and university. In other words, the Japanese school system is often described as a 6-3-3-4 system, based on the number of years spent in each of the respective schools. Children who have their 6th birthday on or before April 1 enter the first grade of elementary school of that year. The school year starts in April and ends in March. For Japanese nationals, six years at elementary school and three years at junior-high school (total nine years) are compulsory. There are public as well as private schools. Elementary school lasts six years. The proportion of private elementary schools is less than one per cent.
I visited Kinrin Elementary School in Kyoto, and this writing is based on my personal observations.
I met the Principal of school, Ms. Nakazawa Akemi, and two members of the Kyoto Prefectural Board of Education, Kyoto Prefecture,Ms. Ohata Machiko and Mr.Tomoya Seki. I discussed the way they raised and taught elementary and junior-high school students.
Discipline begins from pre-school, but primary school plays a more decisive role in this regard. First of all, students of elementary schools are admitted to the schools which are within their local government zones. It prevents unnecessary traffic and, hence, normally students walk to school and back home. They take the school bus only if their home is far from their school. Primary school and junior-high school education is free, but parents must pay for their children’s meals and sportswear.
Care is taken to raise students in a clean and hygienic school environment with the contribution of students themselves in preservation of school’s hygiene.
Discipline and cleanliness begin at the school’s door. Students have to take off their shoes and leave them behind before entering the main hall, and wear a pair of shoes that every student must have during school time. This teaches them both hygiene and discipline. As visitors, my guide, Mr. Sepanta Haqiqi, and I had to take off our shoes and wear a pair of slippers that were kept at hand for us before we arrived. “It is a practice in all elementary schools,” Ms. Machiko said.
Mr. Haqiqi, a Japanese citizen of Iranian origin, well-versed in both Japanese and Persian languages, was a true gentleman and a great help during my trip to Japan.
A particular method of education in Japan is boosting team spirit. For instance, Ms. Nakazawa Akemi explained that there were two or three exams for each class every year. However, the report cards are not given to the students, but to their parents. The reason being, the principal explained, “We want to raise team spirit. This way, we try to uplift all students of a classroom. If need be, however, extra help is provided to the weak students. However, students themselves realize who is doing well and who is not. Therefore, a healthy competition is generated among students without putting the stress of scoring high marks among them.”
As we were discussing these issues, music was played on the loudspeaker. It was lunch time. The principal and the two officials of the Kyoto Prefectural Board of Education were kind enough to take us to the kitchen, where the food was prepared, and they showed us where the dishes were washed and disinfected.
As we were proceeding towards the kitchen we came across students who were carrying a basket containing the plates, spoons, and other utensils required while dining in their classrooms. They were all wearing aprons and masks. But the teacher was carrying a container of hot food to prevent any possible harm to the students. The students of the first grade are exempted from carrying those baskets, and the pupils of the sixth grade would do it instead of them.

（left) Teachers bringing food containers from kitchen. (center) Students carrying baskets from kitchen to classroom to dine. (right)Students washing their hands in a washbasin in the classroom before dining.

After the students finish their lunch, they go to a hall where a nutrition expert explains to them the properties of each food or fruit. When we were visiting the hall, Ms. Shino Hokazono was explaining the properties of fruits by showing them the pictures of different fruits.
After lunch, students are dutybound to clean their tables and the dining hall.
The principal told us that students should learn to realize the value of work from their early school years. Hence, except the students of the first grade, all students must clean the school themselves. As we were leaving the school, we came across students who were cleaning different parts of the school: sweeping the floor and collecting the garbage. Some were cleaning window panes. It was a thrilling scene to see how students learned from early childhood to work and understand the value of work.
Meanwhile, in order to boost team spirit, students are asked to play roles in plays organized in the school theater. Fortunately, there was a rehearsal when I was in the school and the principal kindly took me to the hall. The play was about the struggle between good and evil or light and darkness.
The students were divided into two groups. A good lesson that the play had for the students was: The good guys did not defeat the bad guys; however, they were encouraged to join the good guys, which they finally did. There was no winner or loser. The evil joined the good; in other words, darkness changed into light, which was good for all. At the end of the play all students joined and sang the following song together: Love all human beings; man is not alone; let us join hands, let us share the warmth of hearts with each other.

Ms. Shino Hokazono explaining the properties of fruits to students.

Students staging a play at the school theater hall.