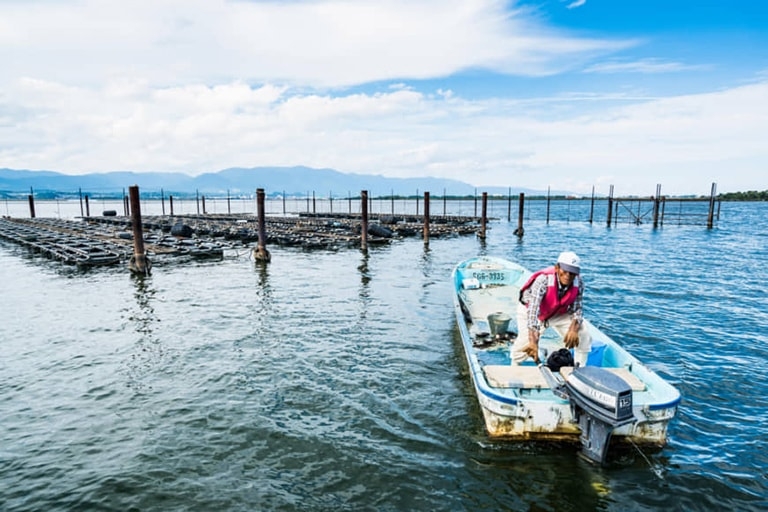 Pearls were largely an accident of nature until the late 19th century, when entrepreneur Kokichi Mikimoto invented a method of cultivating them by introducing a foreign body into the shells of oysters.

A shell protects a mollusk’s organs from predators. The first of three separate components of a mollusk’s shell is an inner layer of nacre (mother-of-pearl), which is composed of a continuously secreting calcium carbonate that is used to smother foreign objects. This sustained reaction ultimately produces pearls.

After receiving a patent for “nucleated” pearl production in 1916, Mikimoto eventually produced a saltwater pearl from the diminutive Akoya oyster that is native to Japan. Akoya pearls are still highly valued today.

Mikimoto, whose dream was to “adorn the necks of all women around the world with pearls,” successfully applied his process to larger South Sea oysters to produce distinctive black and white pearls.

Lake Biwa is the largest lake in the country, producing mollusk species such as mussels for at least 2 million years, many of which were known to produce pearls naturally.

Hoping to tap Mikimoto’s knowledge, Shiga Prefecture invited the “father of cultured pearls” and his associates to Lake Biwa in 1917. After numerous failures using imported mollusks, researchers who returned in 1924 were eventually successful in establishing a freshwater cultivating technique using Biwa’s own pearly mussel (Hyriopsis schlegeli).

Instead of introducing foreign bodies, researchers implanted soft tissue into the gonads of Biwa mollusks and then waited three years as opposed to one or two. They discovered this “non-nucleated” or “tissue-nucleated” method typically produces as many as 20 pearls in one shell.

As a result, Lake Biwa played a major role in the establishment of a domestic freshwater pearl industry that, for a period, captured the global market. 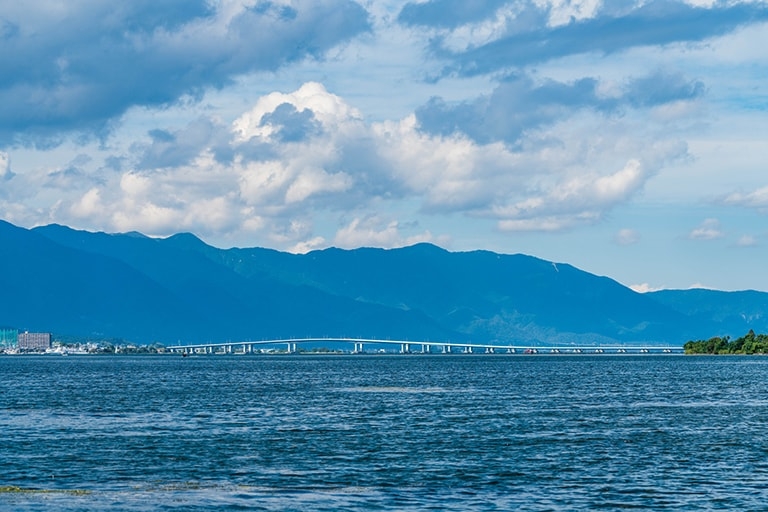 Although Biwa pearls are not always round like their saltwater counterparts, they come in a variety of colors and shapes, and they were considered valuable enough in the late 1930s to launch a successful pearl industry along the lake’s southern shores.

In the decades after World War II, Biwa pearls dominated the global market. At that time, many Japanese consumers knew little of their country’s production of freshwater pearls, for the best places to sell high-cost luxury items were, until relatively recent times, all located abroad.

In particular, Jinbo Pearls based in Otsu, Shiga Prefecture, distributed to the boutiques of Europe and North America, providing a living for countless pearl cultivators on the lake. Lake Biwa pearl production peaked in the early 1970s at just over 6,000 kilograms annually, while the annual value of exported pearls peaked a decade later at around ¥40 billion.

By the end of the 1980s, however, the Biwa pearl industry had collapsed. Those close to the sector typically cite two main factors.

First, domestic freshwater cultivators faced increasingly strong competition from China. Interestingly, Chinese cultivators are believed to have picked up the tissue-nucleated technique as part of cultural exchange programs between the two countries.

“Japan had exchange programs with China at the time,” says Seki Shinsuke, a fisheries civil servant in Shiga Prefecture. “We taught them the technique, perhaps unaware of the implications. In fact, we might have even sent experts to China to help them out.”

Over the years, however, the techniques of Chinese cultivators have been refined to the point that China’s best freshwater pearls now rival their Lake Biwa counterparts.

The Biwa pearl industry has also been affected by a number of environmental issues. Freshwater mussels typically require a constant source of cool, clean water that is rich in mineral content. However, a multitude of water-borne pollutants from surrounding farms, industries and households end up in the lake, affecting water quality.

Higher average water temperatures due to climate change and damage to lagoons have also affected the lake’s ecosystem. Lake Biwa pearls come in a variety of shapes and colors. | PHILIPPE VOISIN

Biwa pearls continue to face fierce competition in the market, leading many to equate all freshwater pearls with those cultivated in Shiga Prefecture. Some cultivators in China reportedly took advantage of this, peddling inferior pearls as “Biwa pearls.”

Kumiko Okazaki, a curator at the Pearl Museum in Kobe, says that a powdery residue is typically noticeable if an older Chinese pearl is shaken over a darkened piece of paper. Today, for the most part, buyers can’t distinguish Biwa pearls from other freshwater varieties.

The U.S. Federal Trade Commission has ruled that the act of branding all freshwater pearls as “Biwa pearls” is an unfair trade practice.

To remedy this misnomer, the city of Moriyama has implemented certification for pearls cultivated from their town on Lake Biwa. In turn, sellers of Moriyama pearls donate a percentage of their sales back to the local association.

China has reinvented itself as a pearl-cultivating nation, supplanting Japan as the world’s leading commercial producer. As early as the 13th century, cultivators in China were inserting small amulets into cockscomb mussels (Cristaria plicata) to create pearl Buddhas.

A domestic pearl-producing area worth noting is Lake Kasumigaura in Ibaraki Prefecture. When Lake Biwa’s pearl industry started going south in the early 1980s, a dozen or so pearl farmers moved to Lake Kasumigaura to establish a new freshwater industry there.

One unintended consequence of this crossbreeding is the extinction of pure pearly mussels in Lake Biwa.

The only pure pearly mussels that are currently known to exist in Japan can be found in Aomori’s Lake Anenuma. This population of mussels is all that remains from failed attempts to create a freshwater pearl industry in the far north. 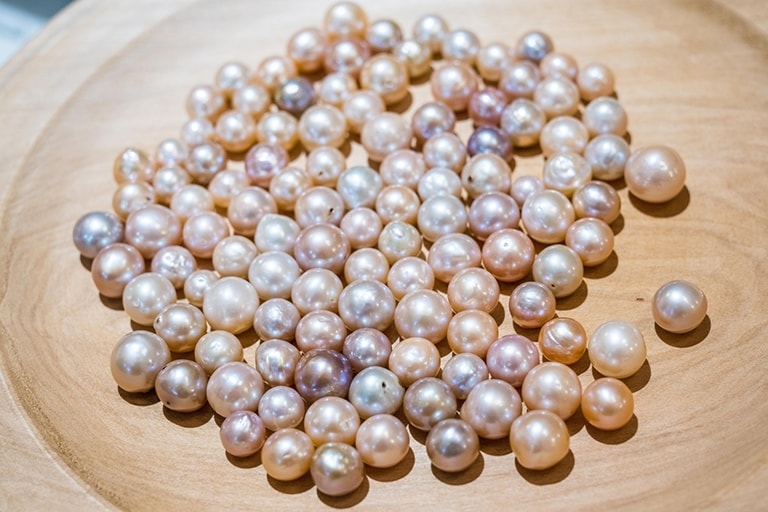 The annual value of exported freshwater pearls peaked in the early 1980s at around ¥40 billion. | PHILIPPE VOISIN

Shiga Prefecture inadvertently contributed to the decline of the freshwater pearl industry by taking various flood control measures, including the construction of a road at a higher elevation and a drainage canal on the Yasu River at the south of Lake Biwa.

To compensate locals whose livelihoods were disrupted, the prefectural government paid nearly ¥2 trillion to various industries. A percentage of that was earmarked for developing new pearl farms.

In 2001, a portion of the payout was invested in restoring equipment such as the metal cages that contain the shells as pearls form as well as excavators that dredge the lake bottom. Dedicated equipment is needed to suspend the mussels above the bottom of the lake for three years because they require 1 meter of water above and below to produce pearls.

Sueharu Hane, who hails from Mie Prefecture, was one of the recipients of the prefectural cash. He had started working at pearl farms immediately after high school in the midst of Mikimoto’s pearl boom. He moved to Shiga Prefecture to break into the nascent pearl industry.

“I asked many to teach me the technique of cultivating mussels but we were all rivals at the time,” Hane recalls. “Eventually one or two locals kindly helped me get started.”

Hane and his family thrived on their mussel farm for a couple of decades. Once the market crashed, however, he accepted a position as a salaryman. It was a lifestyle that didn’t suit him.

Five pearl farms are now operating at the south end of Lake Biwa.

Masakazu Saiki, who took over his elderly father’s pearl farm in Omihachiman, Shiga Prefecture, in 2016, says mussels develop in a symbiotic relationship with certain freshwater species such as catfish. In their larval stage, mussels are parasitic, attaching to fish gills with hooks or suckers in the early parts of their life cycle, he says.

In 2016, however, algae blooms were covering large areas of Lake Biwa’s surface and the fish — and, by extension, the mussels — struggled to survive.

It takes one or two years to raise mussels before they can be grafted. Now, however, less than 1 percent of pearly mussels develop into adulthood via this process. Pearl farmers are now working with researchers to find better ways to raise mussels.

“It’s tough to make a living,” Saiki says. “We have to figure out a way to bring more mussels into adulthood.”

Teams at the Institute for Humanity & Nature in Kyoto and the University of Shiga Prefecture jointly conduct research into lagoon ecosystems in Kusatsu, the birthplace of freshwater pearl farming.

Researcher Tohru Ikeya describes how he works alongside locals to discuss lagoon restoration. A long-term rehabilitation project by Shiga Prefecture has just been completed to resume the utilization of those lagoons.

“Lagoons are important as they tend to have adequate nutrients for efficient primary production. They’re calm and have gentle waves,” Ikeya says.

Once sewage disposal facilities have been installed upstream, it might be possible to regain control of a steady inflow into the lagoons.

Local residents are already starting to see some parts recover.

“In the past, farmers and locals could navigate waterways by boat,” Ikeya says. These environmentally sound ways to get around still exist in a few places.

The climate crisis is an ongoing problem.

“The rise in temperatures is altering the lake’s balance,” Saiki says. “Last summer, the temperature of the lake’s water reached 30 degrees Celsius — a record high.”

Saiki’s father, Isao, adds that today’s shells are thinner and weaker than shells of the past.

“Pearls of the past were better quality because the mussels themselves were healthier,” Isao says.

While researchers and farmers are fighting to save the pearl industry, there are some who would like nothing more than to see its demise. Jason Baker, senior vice president of international campaigns for People for the Ethical Treatment of Animals, believes pearl farming is unethical and exploitative. Baker admits we can’t be certain mollusks feel pain when an “irritant” — a term used frequently in the nucleated pearl farming industry — is inserted but wants people to “err on the side of compassion.”

He says there’s “an endless selection of jewelry that doesn’t harm animals or the planet.”

Syuhei Ban, a professor of plankton ecology at Shiga Prefectural University, counters by explaining that pearl cultivation is a natural process.

What’s more, bivalves die as soon as the shells are pried open and, therefore, do not suffer during harvesting.

“Local residents in Kusatsu hold a memorial ceremony for the mussels that are killed,” Ikeya adds. “And they teach children to respect living things in elementary school.”

While harvesting pearls does cause the mollusks to die, the edible tissue is not wasted. Pearly mussels are generally not highly sought-after cuisine, but Saiki at least sells the edible parts to a restaurant named Yamajin in the city of Omihachiman, Shiga Prefecture.

Cruel or otherwise, related environmental issues are putting much more than pearl farmers and restaurants in danger.

Nevertheless, “staggering numbers of freshwater mussels are dying (in the United States and Europe),” Arnold writes. Many have become endangered almost overnight.

Baker highlights the environmental damage that people’s taste for beauty has wrought, saying simply that “aquaculture has contributed to the destruction of natural pearl oyster beds.”

Indeed, Ikeya notes that a 2016 study found Lake Biwa’s wild mussels are “severely endangered,” while its farmed pearly mussels are struggling to reproduce.

If farmers ultimately give up cultivating these balls of nacre, all future Lake Biwa pearls will once again be produced exclusively by wild mollusks.