Japan has to deal with its Pacifist psyche 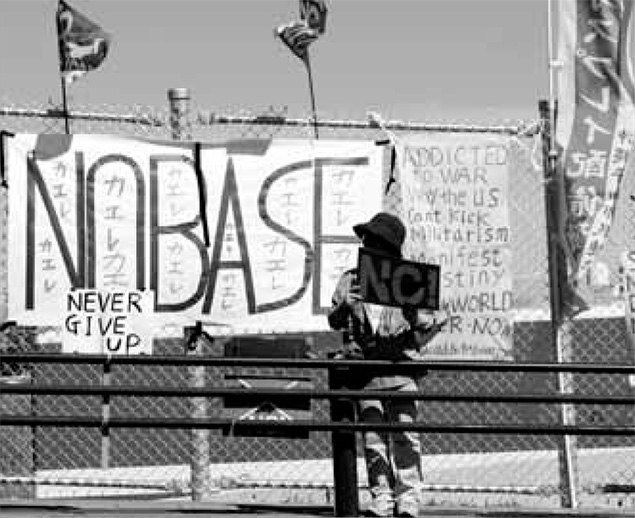 A man in front of the US Futenma airbase in Okinawa staging a protest for the closure of the base. Okinawans' commitment to peace is deep-rooted. Photo: Reuters

Several opposition bigwigs, such as Democratic Party of Japan leader Banri Kaieda, even lost their seats. However, Okinawa prefecture emerged as a stand-out exception to the rule of the dominant Liberal Democratic Party (LDP); the three incumbent LDP candidates in Okinawa all lost their seats and managed to return to Parliament only on the back of the proportional representation system.

The opposition Communist Party and Social Democratic Party both reject LDP plans to relocate United States bases within Okinawa. The election of new anti-base Okinawa Governor Takeshi Onaga last month put a spanner in the works after Mr Abe had successfully negotiated a financial-aid package with the previous Governor in return for his approval on relocating the US airbase in Futenma within the prefecture.

Despite Mr Abe's renewed national mandate, he faces continuing difficulties in Japan's strategically-important southernmost prefecture, in light of the US rebalance to Asia and China's growing maritime presence in the Asia-Pacific region.

The Senkaku islands - which China also claims and calls the Diaoyu islands - fall under Japan's administrative control as part of Okinawa, which hosts 74 per cent of all US military facilities within Japan. The prefecture must surely be considered on the list of pressing policy challenges for Mr Abe.

Together with other participants from countries of the Association of South-east Asian Nations, I recently took a trip to Okinawa sponsored by Japan's Ministry of Foreign Affairs on a programme to foster a better understanding of Japanese foreign policies.

One highlight was a courtesy call on the US Consul-General's residence overlooking the Futenma airbase. Another was a roadside pit stop with a view of the sprawling Kadena airbase. With multiple types of aircraft such as surveillance planes, refuelling tankers, fighters and helicopters taking off and landing every few minutes, one gets a good sense of the scale of the US military presence as well as the noise generated for local residents.

We also received briefings from the Regional Security Division of the Okinawa Prefecture Government as well as Japan's Ambassador in charge of Okinawan Affairs.

The deep complexity and multifaceted nature of the base relocation issues mean that not only does Tokyo have to manage its relations with the Okinawa Prefectural Government and politicians, but the local media, nongovernmental organisations and landowners are also voices in the debate. The bitter experience of war and devastation during the Battle of Okinawa in 1945 is also deeply etched into the Okinawan psyche.

Visiting moving and poignant exhibitions such as the Prefectural Peace Memorial Museum and the Himeyuri Peace Museum brings home this point about sensitivity to the use of military force in international politics. Located close to the cliffs where the defeated Imperial Japanese Army commander committed suicide, the Cornerstone of Peace monument has inscribed on sombre slabs of black rocks the names of those who had lost their lives in the conflict, regardless of nationality. The Okinawa Peace Prize is also awarded to those who contribute to regional peace and stability. The commitment to peace is deep-rooted.

The vast US military presence also means that Okinawa has become what some analysts called "the tip of the spear" for American power projection in North-east Asia, particularly the very capable Marine Expeditionary Unit (MEU) based there. The MEU would most likely be called on to respond to a crisis on the Korean peninsula. It was also deployed to provide relief and assistance for natural disasters such as Typhoon Haiyan last year.

The role of the US military presence in providing deterrence and security in the region has to be balanced with local sentiments towards pacifism and the burdens that bases impose on residents. On arrival in Naha airport, US military aircraft can be seen parked close to the runway and large portions of land are fenced off for US military use.

Mr Abe's power might well have been consolidated with the recent electoral success. However, this power is not absolute and will depend on how it is brought to bear on achieving consensus that is still needed on dealing with specific issues and interests. Recent media reports suggested that Tokyo might reduce the financial-aid package for Okinawa as a potential negotiating tool, though this might not go down well in Naha. Mr Abe can also act to assuage environmental concerns over the base relocation as well as address negative local media coverage.

In the case of Okinawa, with the loss of LDP seats and a new Governor opposing base relocation plans, Mr Abe will have to be more sensitive than before to local political sensitivities, starting with Mr Onaga's coming visit to Tokyo.