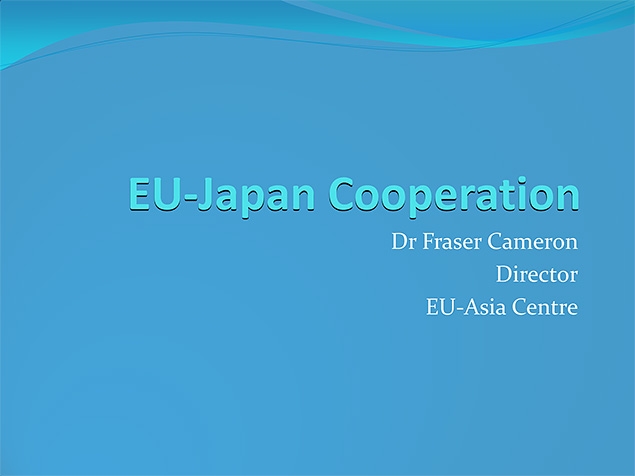 My visit coincided with Abe calling a snap election, a move that seems to have baffled many Japanese given that he had a clear majority in the Lower House and two years left of his mandate. As expected the PM was re-elected with a similar majority in the December elections for the lower house.

Japanese interlocutors made polite and earnest noises about the importance of the EU. But they did not consider an early breakthrough in the FTA negotiations likely and were cautious about signing up to CSDP cooperation. They emphasised that Tokyo was following the EU/G7 line on Russia. Some other key points:

Defence: Interlocutors said that China was not yet implementing Abe-Xi hotline agreement despite regular reminders from Tokyo. Although China did not want any conflict with US it was steadily pushing the boundaries as regards maritime provocations. PLA propaganda against US and Japan was worrying as was non transparency of military budget. Obama statement on guarantee covering Senkaku islands was very important for Japan. US was putting enormous pressure on Tokyo and Seoul to re-engage on military cooperation. Tokyo ready to move ahead on closer defence relations with India, Australia and ASEAN. Japanese minister attending ASEAN defence meeting in Myanmar. Okinawa election made it more difficult to secure compromise on moving base but 'it had to be done'. Japan keen to work closer with NATO (not least because of Russia) but joining in CSDP would take time due to difficulty of selling at home. Priority was defence revision. Japan keen to beef up procurement cooperation with UK and F. I suggested they should also be talking to the European defence Agency.

Foreign Affairs: Most interlocutors made statements about importance of deepening EU-Japan relations but were vague on details. Little optimism on FTA (or TPP) - everything on hold until after elections. Abe's priority was abductees in DPRK - then China. Took many hours to agree modalities of Xi-Abe meeting (handshake was for domestic audience). All said Russian behaviour was 'unacceptable' but also important for Tokyo to keep open channel to Moscow for bilateral relationship. Abe-Putin get on well. Japan ready to increase support for Ukraine but where to start? Not worried about closer Russian ties with China as fundamentally each views the other with deep suspicion. Japan wants to deepen relations with major ASEAN states plus India (good Abe-Modi relations) and Australia.

Comment: Clearly concern about China number one priority - hence Abe's globe-trotting efforts to win support for Japan's policy. Not a single interlocutor brought up history as an issue and no-one considered European-style reconciliation possible in East Asia in next 20 years. A visit to the museum at the Yakusuni Shrine revealed a very partial view of modern history. Most considered Japan had apologised sufficiently, including on comfort women, so we should not expect Abe to do more.

Most agreed no need for Abe to call early election but economy likely to get worse and opposition weak. A renewed mandate would allow Abe not only opportunity to pursue 'Abenonmics' but also to try and restart nuclear power and amend the constitution to allow Japan to participate in collective defence - both very sensitive issues.

Many stressed how quickly Japan sided with EU over Ukraine - but important not to isolate Russia. Africa singled out as possible area for closer EU-Japan cooperation. Japanese companies increasing presence there, partly due to Chinese competition, and welcome EU experience.

Overall the visitor is impressed by the politeness, efficiency and cleanliness of Japan. If this is a country in decline then many people around the world would be only too happy to experience it.