Japan has been the focus of several significant political events in 2019. The abdication of Emperor Akihito leaving the Chrysanthemum Throne to his son, the new Emperor Naruhito was important for starting a new era and reflecting rather domestic challenges of Japan. And the G20 Summit and peripheral conferences were important mostly due to their potential consequences in world politics and economy. It also highlighted certain international challenges.

That is why the “Japan Up Close” program in the “Building a Multi-layered Network of Japan Experts” framework has been a timely and unique opportunity for me to have a closer look to Japan’s today and near future.

The abdication of former Emperor Akihito at the age of 85, the first such a move after more than 200 years, was due to his “failing health conductions” which no longer allowed him to fulfil his duties. This might also be seen as a subtle attribution to one of Japan’s most serious social problems: the ageing problem in a post-industrial society. According to official figures, the number of people older than 100-years-old is more than 71 thousand (88 per cent of whom are women) among Japan’s population of more than 126 million people. Life expectancy in Japan was measured as 50 for men and 54 for women in 1947, right after WWII; in 2018 the figures were more than 81 for men and 87 for women, mainly due to advancements in medicine, awareness of healthy living and the delicious Japanese diet. 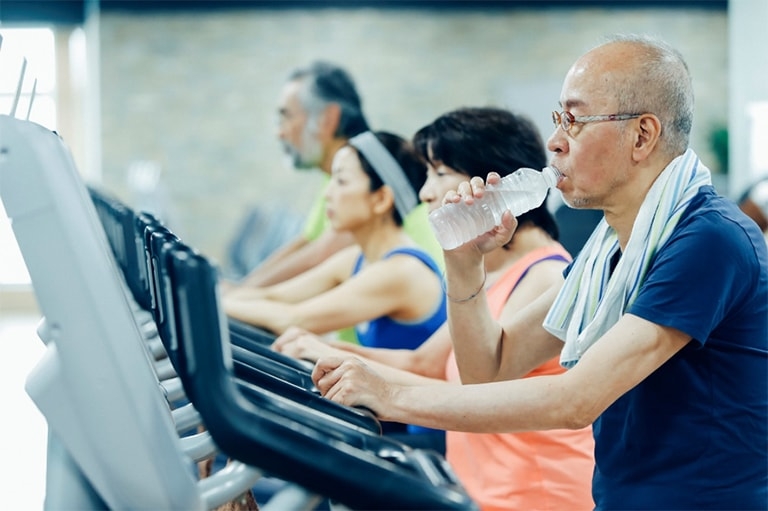 Japan’s residents enjoy some of the world’s longest lifespans, and advances are allowing them to stay healthy and active longer

The Ministry of Health, Labor and Welfare predicts more than 26 per cent of boys and 50 pct. of girls born in 2018 are likely to live up to 90. But nearly 29 pct. of the boys born in 2018 and 20 pct. of the girls are likely to die because of cancer. That is why cancer treatment is one of the main concerns of Japanese researchers, as Dr. Yasumichi Hitoshi, President and CEO of Thyas Company in the premises of Japan’s prestigious Kyoto University, underlines.

Yoshihiko Jabashiri, the Principal Deputy Director for Aging Society in the Cabinet Office says that the outlook puts pressure on the social security system with retirement the age being 60 (and under certain conditions even 65) and creates a labor shortage. Finance Ministry figures show that 34.2 pct. of Japan’s 2019 budget of 102.7 trillion Yen (913 billion USD) is to be spent on health and social security. Mr. Jabashiri says the Shinzo Abe government has been planning to overcome the challenge by increasing the retirement age, employing more women, elderly and disabled people (including the utilization of advanced medicine and robotics) as well as a foreign workforce.

The 59-year-old new Emperor ascended to Throne on May 1, with his formal Enthronement Ceremony taking place on October 22, is the first Emperor of Japan who was born after WWII, representing a new generation. Even though his office is purely symbolic and barred from giving political statements by the constitution, Emperor Naruhito’s “happiness and world peace” wish in his inauguration speech was considered by observers as a support for Japan’s pacifist stance since being defeated in WWII.

That doesn’t mean that Prime Minister Shinzo Abe is not facing several serious foreign policy and security challenges. The most serious security and foreign policy problem is neighboring North Korea’s armament program. The only nation which experienced the tragic results of the atomic bomb during the U.S. attacks on Hiroshima and Nagasaki in 1945, North Korea’s nuclear program and missiles program is a pressing concern for Japan. There is additional concern over U.S. President Donald Trump’s “America First” policy. Trump gives the impression to Japanese decision makers that he wants to shake hands with Kim Jong-un to save U.S. territory from long-range missiles, whereas Japan is already inside of North Korea’s middle or even short-range missiles.

“We have been relying on the goodwill of the U.S.”, says Dr. Yuichi Hosoya, a professor of International relations in Tokyo’s Keio University, “But under Trump, people have doubts.” The professor also stresses that since the Constitution imposed by the U.S. prohibits Japan from use of military force in political conflicts according to its Article 9, Tokyo has also been relying on the “goodwill” of its other neighbors like Russia, China and South Korea, which latter two countries experienced occupation by the Japanese armies in the first half of the Twentieth Century. He thinks that now, all of them want to show what they can take from Japan.

Japan has sovereignty problems with Russia over the Kuril Islands in the north which Shinzo Abe wants to solve with more trade agreements with Russia’s Vladimir Putin. With China, there is the Senkaku islands problem in the South, in which China claims rights to ease its opening to the Pacific Ocean both because of military and commercial reasons, according to Japanese Foreign Ministry sources. South Korea’s deployment of a military unit on the Takeshima Islands and the 2012 landing of the South Korean President on the island at the time, claiming the territory. This has been a serious challenge to Abe, who called on South Korean leader Moon Jae-in to take the issue to the International Court of Justice, in vain. Having the historical burden of issues like –as they are called- “comfort women”, that’s forcing women for prostitution and men for slave labor, during the Japanese occupation of the Korean Peninsula between 1910 and 1945, Moon asks for more compensation in spite of former deals agreed between two countries. He managed to get some concessions by threatening Abe not to extend an intelligence-sharing protocol. The protocol was crucial for Japan’s security, as Japan is about to become a part of a global intelligence-sharing network, “Five Eyes plus 3” mainly against threats from North Korea, China and Russia.

People are still reluctant on the issue but the issue of a review of the Article 9 of the constitution allowing the use of military under certain conditions might emerge in the political agenda of Japan, possible before the next elections in Japan in 2021. 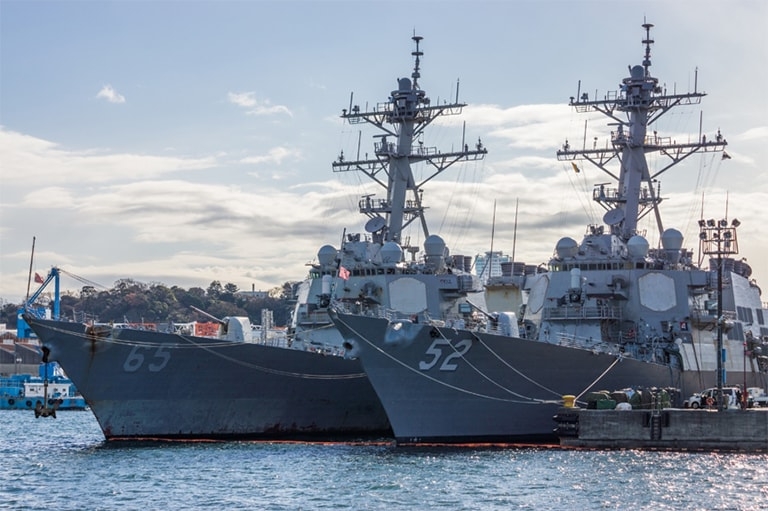 Japan is still the world’s third-largest economic power after the U.S. and China. Japan becoming the world’s biggest economic powers is sometimes linked with no military spending after the WWII but fails to explain the industrious nature of Japanese people perhaps more related to their education system. The fact that in their first three years, the education is not based on knowledge but manners, giving the kids the notion of being respectful, fair, gentle and grit is one of the keys of their success in economy and technology as well. Japan seems to manage the Western-leaning cultural shit among new generations with traditional values.

That is no surprise that the focus of world politics has been shifting to the Pacific region for some time with a particular emphasis on U.S.-China trade wars as two of the U.S. commercial competitors, including Japan lay in the region. Japan is still trying to overcome the negative outcomes of the economic slowdown of the 1990s which caused already conservative Japanese investors to be overcautious. Labor sources point out the brain drain of able scientists and engineers during the 1990s and 2000s particularly to South Korea and China, contributing the leap forward of those countries in cutting edge digital and communications technologies. Government is looking for ways to encourage the investors and also reverse the brain drain.

Energy security is a major issue for Japan’s economy. In recent years Australia became the major supplier of coal and LNG to Japan, but in crude oil, which still makes 40 per cent of Japanese energy dependency is from Saudi Arabia and the UAE; Japan can make no use of its important investments in Iran, due to the U.S. sanctions. Therefore, the Middle East is still essential for Japan, due to its dependency on oil to sustain its economic growth.

The priority of Japanese energy policy has radically changed following the Fukushima disaster in 2011; until then, energy security used to be a major concern, but now its safety. The 25 pct. share of nuclear energy in Japan’s electricity production has dropped to 3 pct. as many power plants were closed. It’s around 7 pct. as of 2019 and expected to grow up to 22 pct. in the near future and more power plants with new safety measures will start producing again.

Japanese companies’ withdrawal from Turkey’s second nuclear power plant project in 2019can cause a slowdown in the investment environment between the two friendly countries. No sizeable investments are in sight from Japan to Turkey for this moment as they were experienced in the near past. The reason, according to the Japan External Trade Organization (JETRO) sources is not only the rising risk of terrorism in the region but also the U.S. sanction threats on Turkey and the governance problems. Those reportedly include President Tayyip Erdoğan’s Justice and Development Party interventions to the Central Bank and free market, especially on the banking system.

Japan is getting prepared for the 2020 Summer Olympic and Paralympic Games in Tokyo which the government has been planning to take as another opportunity to prepare the country for the new era, as it was named by Emperor Naruhito as “Reiwa”, which was officially translated into English as the “Beautiful Harmony”; an optimistic wish as challenges mount up in Japan’s geography and elsewhere in the world.