Every nation is facing the stark reality of climate change. To tackle such a global challenge, the world’s leaders are accelerating their efforts, both nationally and globally in cooperation with developing countries. For this reason, Mr. ONO Keiichi , Director-General and Assistant Minister for Global Issues, the Ministry of Foreign Affairs, has defined 2021 as the “Year of Climate Action,” by highlighting the US return to the Paris Agreement, the Leaders Summit on Climate, the G7 summit at Cornwall, and COP26 in Glasgow. To keep the “green momentum,” he said, common efforts are needed. Mr. Ono recently shared Japan’s role on climate diplomacy at the conference with the Foreign Press Center Japan (FPCJ). 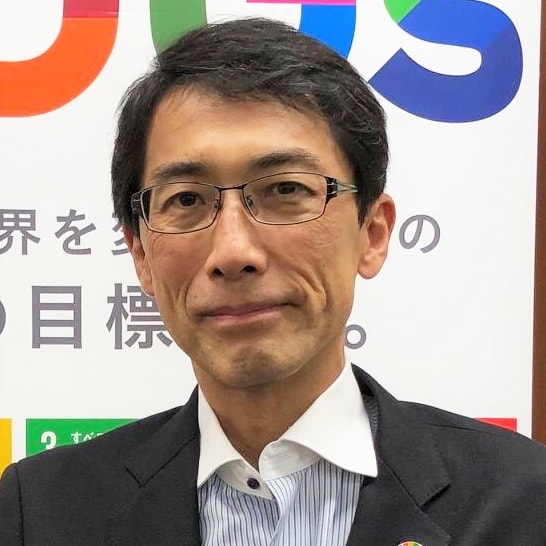 At the Leaders Summit on Climate in April 2021, Mr. Ono said he was impressed by the enthusiasm of the participants, who represented 40 countries . It was in this event that then-Prime Minister SUGA Yoshihide announced Japan’s bold determination to “reduce greenhouse gas emissions by 46% in fiscal year 2030 from its fiscal year 2013 levels, and to continue its challenge to meet the lofty goal of 50%.” Such an objective is aligned with the long-term goal of net-zero emissions by 2050.

Additionally, he said that the new objective goes further than the former goal of 26%.Indeed, the accomplishment of such a goal will be a real challenge. Nevertheless, Mr. Ono emphasized that the determination of the Prime Minister has empowered all the cabinet ministers to apply “various budgetary measures, tax related measures, regulatory reforms as well as specification of standards.” In addition, the government has pledged to decarbonize power sources to the maximum.

Such extensive efforts will include cooperation with the private sector. Last year the government announced a fund of 2 trillion yen to promote R&D and implementation of sustainability innovations. Mr. Ono confirmed that the drive towards greener activities has been supported not only by the government , but also by local institutions, communities, and the population at large.

Climate diplomacy with the US and the EU

The efforts of the Japanese government also include an enhanced tighter synergy with the US and the EU. For instance, former PM SUGA announced the “U.S-Japan Climate Partnership” upon his visit to the White House in April, 2021. Mr. Ono elaborated that “such a partnership consists of 3 pillars: the first is cooperation on climate goals and implementation of the Paris Agreement. The second pillar is clean energy technology and innovation. The third focuses on accelerating the decarbonization transition in developing countries, particularly in the Indo-Pacific region.” 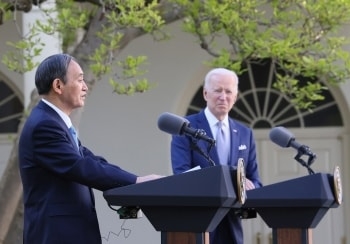 At the White House this past spring, Prime Minister SUGA and President Biden launched the US-Japan Climate Partnership

In parallel, Japan and the EU share the same vision of “achieving net-zero greenhouse gas emissions by 2050.” Against this background, both sides have launched the “Green Alliance,” a partnership for promoting “green growth” in their respective economies and supporting the sustainability transition in developing countries.

Hand in hand with developing nations

In addition to the efforts of Japan, the US and the EU, active participation of other countries is essential to address climate change worldwide. Mr. Ono stated that “we are providing assistance in the transition to decarbonized societies in developing countries.”

At the G7 Summit in Cornwall, the leaders reaffirmed the collective goal of developed countries to jointly mobilize US$100bn per year from public and private sources, through to 2025. In this regard, Mr. Ono highlighted PMSUGA’s commitment that “Japan will provide climate finance, both public and private, totalling 6.5 trillion yen over the next 5 years, from 2021 to 2025 and enhance assistance for adaptation.

Japan has so far provided developing countries with financial assistance in the amount of US$12.6bn annually (2019), through bilateral assistance such as Official Development Assistance (ODA), export credits, bank loans and through multilateral channels. Examples include projects such as a hydroelectric power station in India and the alleviation of traffic congestion and flood damages in the Philippines.

From October 31st to November 12th, the COP26 will take place in Glasgow (UK) where further progress is expected to be announced.