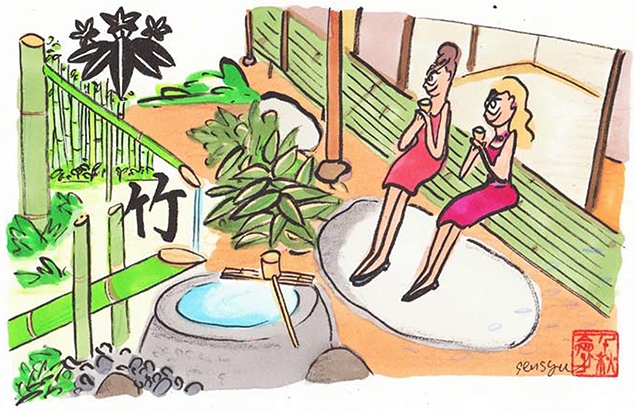 I'm not sure what Japanese people think of when they hear the word bamboo, but for the French bambou long possessed the exotic aura that once surrounded everything Asian. From Vietnam and Cambodia (Indochina in the colonial period), to Thailand, Indonesia and China, for people in the West bamboo conjures up visions of faraway Eastern lands.

On hearing the word "bamboo" we French are reminded of the distinctive furniture that almost certainly graced our grandparents' parlors: at the very least one or two seats, a few armchairs, and a dainty tea table. Such pieces chimed perfectly with Gallic tastes in furnishings and added a whiff of the mysterious East to the French-style interiors beloved of Europeans.

In the 1860s, the advent of steamship travel under the Second Empire of Napoleon I's nephew Napoleon III made distant lands more accessible. Long-term French residents of Asia returned bearing attractive bamboo furniture as souvenirs from the colonies. Europeans found this delicately-wrought furniture irresistible, so French furniture-makers began to produce imitations. For this they employed timbers other than bamboo, but took care to meticulously reproduce the bamboo joints.

The image of bamboo is closely linked to Asia. The last wife of the late Serge Gainsbourg-singer, songwriter, composer, and father of actress Charlotte Gainsbourg-went by the stage name of Bambou, a nod to her Vietnamese ancestry.

Prior to arriving in Japan in the late 1950s, my image of bamboo was confined to its aforementioned French colonial period charms.

Japan, on the other hand, had never been colonized, thanks to the (wise, as it transpired) determination of the Tokugawa Shogunate, having observed developments in other parts of Asia, to guard against foreign invasion through the system of sakoku. By the time Iemitsu ruled Japan, this closing of borders was complete. Coming here I discovered a distinctly Japanese bamboo culture that epitomized Japanese elegance and refinement.

My first visit to Japan was in 1958, just thirteen years after the end of the Second World War. By now the country was already quite far down the road to Americanization, but its traditions remained robust, and the people's way of life was closer to that of the Edo period than Los Angeles. These were the good days, before the archipelago was swamped in plastic from end to end.

The call "Take! take!" still rings in my ears. This was the cry of the peddlers who went from street to street selling long bamboo poles for hanging out laundry to dry.

I was renting a small house in Shimo-Meguro, on the property of a Mrs. Okada, who lived in the main house next door. Here, one truly had the sensation of being in Japan, and I was happy to make my home there.

Through the woven bamboo door to the garden, the path to my little house passed through a small thicket of bamboo. While it swayed in the spring breezes, and bent under the weight of winter snow, that bamboo never snapped.

I often visited Mrs. Okada at the main house, which had escaped the B-29 firestorms of 1945. In her entranceway, the ceiling woven in a lattice pattern for strength was made of bamboo. Ushered into the living room, I spied the tokonoma alcove where the Japanese display prized works of art: here the posts were again made of bamboo, this time a different variety.

A Japanese ikebana flower arrangement was displayed in a bamboo basket of splendid spiral weave.

Enjoying a chat in the garden, Mrs. Okada and I would sit on the engawa, a kind of veranda or narrow passageway circling the house. At the Okada home, the floor of this veranda consisted of bamboo stalks split in half. This was highly pleasurable to walk on, and a great relief for aching feet. The sharp clack of a shishi odoshi water fountain resonating at regular intervals from the garden was the most pleasant sound imaginable. A shishi odoshi is a device consisting of a bamboo tube open at one end into which water pours, until its weight tips the tube, causing it to hit stone and make a sound. In earlier days, shishi odoshi were used in the fields to scare off animals that came to eat the crops.

Calling on the Okadas of an evening I would be met with sake served in a hollowed out bamboo tube. The son would come home late at night after kendo, a bamboo practice sword over his shoulder.

When I called the butcher to place an order, it would arrive wrapped in bamboo skin.

Visiting the shrine near my house, to purify the soul I would use a bamboo ladle to scoop up spring water and wash my hands.

Bamboo features in pictures everywhere. Often portrayed as a symbol of strength (because it flexes but doesn't break), or purity (because a bamboo ladle is used to scoop water and wash the hands or mouth), it is in fact a fitting subject for any artist seeking to pay homage to the attractions of nature with minimal affectation.

The beauty of a bamboo grove, the trunks of soft, lustrous green tracing crisp vertical lines, provides the most wonderful inspiration for screens, kimono, and lacquerware, while the crisp contours of bamboo leaves make the perfect motif for the family crests with which the Japanese mark their most precious belongings.

Thanks to Japan, bamboo has escaped being a symbol of colonialism. Bamboo is the soul of Japan. I sincerely hope its people do not forget this.