Member of the Japan Professional Photographers Society. She has been covering manual labor and craftwork in her travels around Japan and overseas for 25 years. Her lifework has been to photograph indigenous natural surroundings and the culture connected to it in the islands of Oceania and the Pacific Rim, Asia and Europe. She is the author of Fiji no Maho (The Magic of Fiji) (Chihaya-shobo), and has held numerous exhibitions. 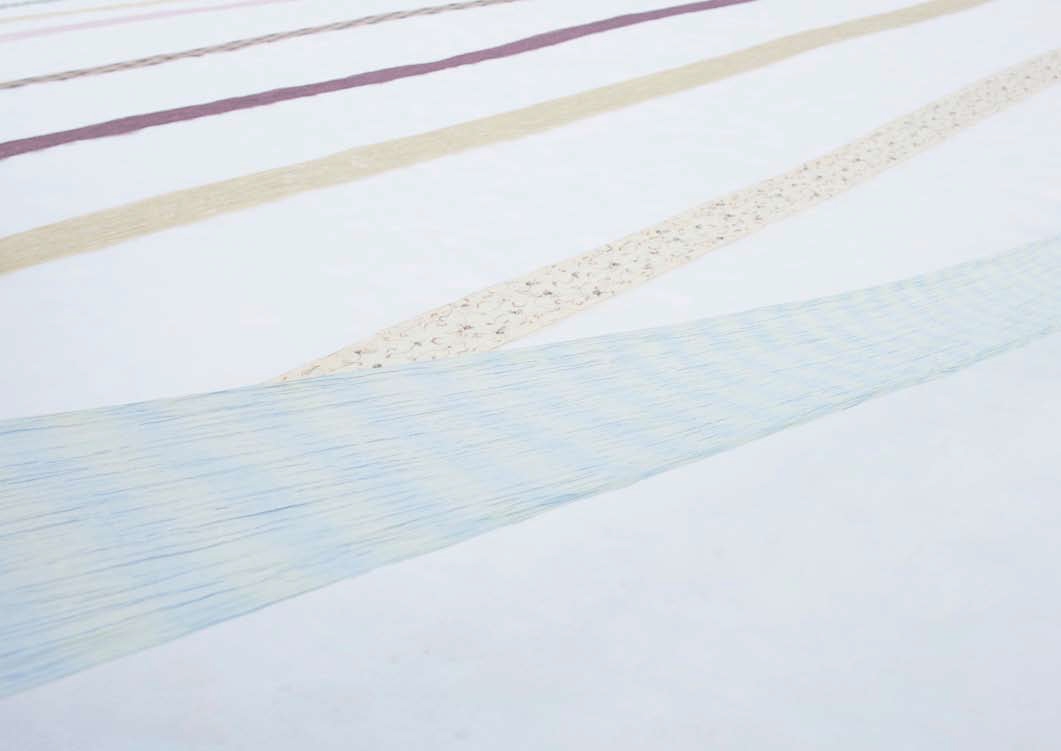 Plant fibers spun one by one into twists of thread are woven into cloth. It has been called“ Nature’s cloth”— a fabric that has been made for thousands of years with astounding effort. Ojiya-chijimi is a textile with a history, and it requires a unique process of snow-bleaching as part of its production. Tough yet soft on the skin, this textile also exudes a refined artistic beauty.

Ojiya is located in a rich grain-producing region through which the Shinano River meanders, providing the surrounding area with water. These fertile lands also become fields of snow for five months in winter.

It was after several days of snowstorms that spring finally arrived, and the contrast between the blue sky and snow fields bathed in spring sunshine was especially dazzling. Rows of light-colored kimono cloth—finished woven cloth made from thread with three months of painstaking effort —were laid out rainbow-like on the snow, almost like some modern art installation.
The final stage in producing Echigo-jofu and Ojiya-chijimi textiles requires exposing them to snow, a process which makes use of the bleaching effect from ozone produced when snow evaporates in the sun. The wisdom of ancestors has been passed on through this method that removes excess dye, loosens snarls in the threads, and gives the cloth a light, soft finishing touch.
“Yarn is formed in snow, woven in snow, rinsed in snow-water, and bleached in snow. There’s cloth because there’s snow…. You could say snow is the parent of this cloth.”
This is a line from Hokuetsu Seppu (Snow Stories of North Etsu Province), written in the Edo period by Bokushi Suzuki, a man of letters from Shiozawa. He went to investigate Echigo province and the people of the snow country personally in order to write and illustrate the book. That passage was also used by Nobel prize-winning author Yasunari Kawabata in his novel Snow Country, to create layers of imagery depicting the cleanliness which the main character—a man from Tokyo—finds so attractive in the lover from Echigo whom he has travelled to meet.
The people of Echigo certainly do have a disposition that is snow-like in its purity, along with a tenacity acquired from having to live with heavy snow. No one could survive by themselves in such an environment, and the people have a deeply-rooted spirit of mutual support.

Early morning and it is still dark. The paper-screen covered window is white with a cozy brightness generated by the snow. Grandma quietly gets up so as not to disturb the grandchildren, and goes to the living room where she inserts feet into the kotatsu (heated table) to warm up, and gets on with work. With total concentration she sets about spinning the yarn with her hands, plying them the same as she did yesterday, and the day before that.
Delicate fibers of karamushi, also known as choma, the plant used to make the ramie yarn used in Ojiyachijimi, are laid out like a spiders web on the black cloth spread over her knees. Spine straight and eyes narrowed, she focuses her concentration on her fingertips. She takes the threads from a thick telephone directory where they have been carefully pressed and, occasionally putting them into her mouth to apply moisture, fastens them together. She joins another thread to the end, puts it on the loom and forms the thread. The only sound in the room is the ticking of the clock. All is quiet in the faint light of dawn. Snow absorbs the noise of the world, and only the sound of silence rings through the bracing air.
“Karamushi breaks easily when there’s no humidity,” she murmurs as her long-practiced hands fasten the threads.
“In the past four of us women used to sit round the kotatsu together and work, but we kept quiet and concentrated.”
(laughs)
It felt good to concentrate like that she explained. Her face looked dignified, filled with a Zen-like presence. If there weren’t such ties between people, Echigo cloth would not exist. 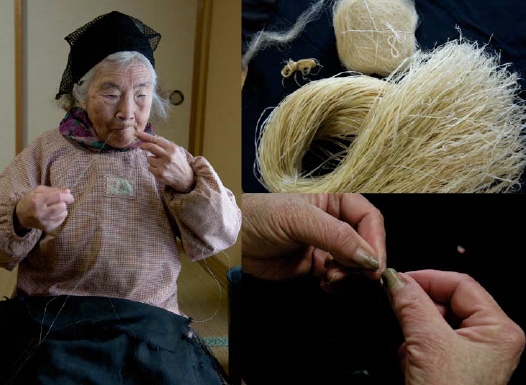 When winter comes the women gather inside, moving their fingers in silence. With great care they spin the ramie yarn as it grows by millimeters and centimeters. The painstaking work continues in silence, with the great patience required by such manual labor, until in early spring the woven kimono cloth is laid out on the snow fields in clear weather.

A Lost Tradition Revived in the Heisei Era

The Echigo-jofu and Ojiya-chijimi textiles were designated as UNESCO Intangible Cultural Properties in 2009.
It was the first such recognition of a Japanese textile. That honor undoubtedly gave great pleasure to these modest snow country people, who are unskilled at self-promotion.
However the path to achieving this recognition was not an easy one. For a time the kimono cloth production methods that produced Ojiya-chijimi cloth of sufficient quality to be recognized as genuine actually died out and were lost.
In 1955 Echigo-jofu and Ojiya-chijimi were designated Important National Intangible Cultural Properties, but there were five conditions that had to be met to be awarded this recognition. The ramie yarn should be spun by hand, the threads used to make the kasuri splash-dye pattern should be hand-tied, the weaving loom should be a type that is operated while seated on the floor, the crimps should be made by handrubbing or foot-trampling in hot water, and finally, it should be snow-bleached. These were strict conditions.
In an age when cotton yarn and machine woven cloth were taking over, and demand for kimonos was dwindling, it had become difficult for artisans to find opportunities to practice their clothmaking skills. All in all it took seven years to revive all the stages, starting from judging a piece of yarn by hand, until all were regained by 1989.
Nowadays progress has been achieved not only for kimono cloth, but also for the crimped cloth that is used for interior decoration or making westernstyle clothing which is close to handworked, and has been woven making free use of delicate machines.
Lifestyles have changed too, and the fact is that the traditional kimono is not worn by everyone at important ceremonial occasions such as weddings and funerals anymore.
However, younger generations are now revaluating traditional clothing, since it is a part of Japanese culture that does indeed advantageously display the Japanese figure and style of manner. 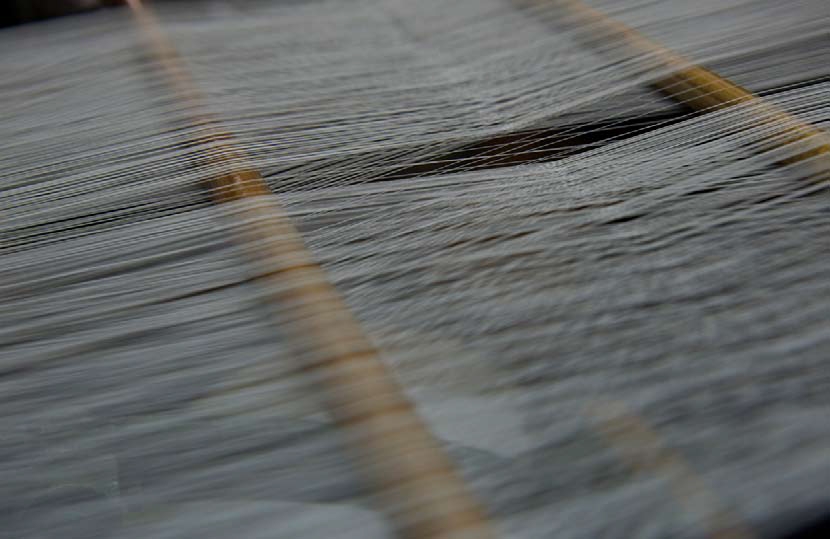 Ojiya-chijimi, has, as the name in Japanese suggests, fine wrinkles in the fabric itself. Originally only high-quality hemp cloth was woven in Echigo, but in the 17th century a samurai from Akashi (modern day Hyogo prefecture) arrived, bringing techniques for Akashi-chijimi silk with him that were used to develop Ojiya-chijimi.

Natural Fabrics are Pleasant Because of Their Gentle, Cool Touch

The cool, pleasant touch of natural fabrics on the skin is a blessing in hot, humid Japanese summers. Even now jofu and chijimi textiles are produced during the snowy months from December to March, as they always have been. Natural materials don’t respond well in environments where the temperature is artificially controlled by air conditioners, since ramie itself is a living thing.
“If the humidity is not right the thread snaps and gets offended,” said one weaver. A true child of the snow indeed!
Ramie yarn is made from Boehmeria nivea, the scientific name for choma, or false nettle in English. This thrives in hot, humid summer weather. Since far back in the Jomon period (about 10,000 to 300 BC) in the days before there was any cotton in Japan, this plant fiber was used for many other purposes besides clothing. Nowadays you can see it growing everywhere mixed with weeds, but according to the Nihon Shoki (Chronicles of Japan), in 693 the Empress Jitou issued an imperial edict stating that that the people were encouraged to cultivate this plant.
Since ancient times cloth made from ramie has been the standard, used not only for Echigo-jofu and Ojiya-chijimi textiles, but also for Noto-jofu, Omi-jofu, Nara-sarashi, Miyako-jofu and Yaeyama-jofu textiles. Its history in Echigo-jofu is said to go back 1200 years. The medieval text Azuma Kagami (Mirror of the East) records that Echigo cloth paid as tax in kind during the Nara period (AD 710-794) was stored at the Shoso-in, the treasure house belonging to the Todai-ji temple in Nara, and that the Court nobles of Kyoto were pleased to receive it as a gift, under the name Eppu, during medieval times.
Kenshin Uesugi, a daimyo during the Warring States period (1467-1568), eventually pushed his enemies to cultivate choma, sending it as a gift to Kyoto, selling it and making an enormous profit when its high quality was acclaimed in the capital. It was highly prized because of its resilience to sweat and thus used as a lining in armor and helmets. It also did not let arrows penetrate and was used for camp enclosures. Showa-mura in Fukushima prefecture, the only place in Japan where choma is produced, also has deep ties with Kenshin Uesugi. 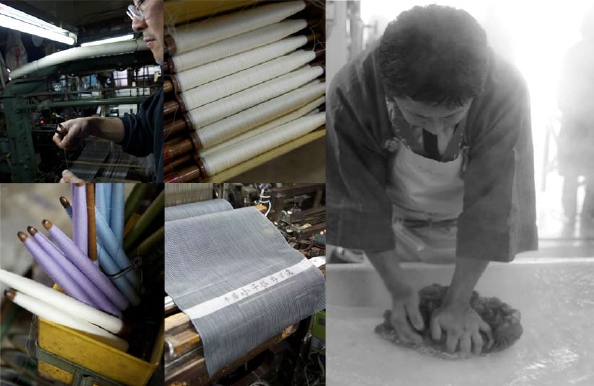 The weft (crosswise) thread is given a strong twist as it is woven, and finally the fabric is rubbed by hand in hot water to make the crimps and bring out the distinctive texture. In recent years many bolts of fabric are machine-made, with the rubbing in hot water being the only manual process.

A Land that Produces Cloth Whenever Winter Comes

The skies in Echigo are wide and the mountains towering. In summer green ears of rice bend in the wind and enormous bursts of fireworks rise up at the local festivals. In autumn the golden heads of rice droop heavy. When the abundant harvests are over, cold fronts start arriving from Siberia. Thick clouds cover the sky and soft white snow comes dancing down. Eventually the entire landscape is swallowed up by the snow. Thus does winter come to Echigo time and time again. And every time winter comes, more fabric is made. “Is the snow heavy this year?”
To spin the yarn and weave the cloth during the snows of winter, while wishing for the coolness of summer, is women’s work. To sweat while splitting wood in silence during midsummer, so that the whole family will be safe and sound when winter comes on, is men’s work. Ojiya-chijimi is the ultimate gift from winter to summer, born out of the Echigo people’s mutual care support each other. 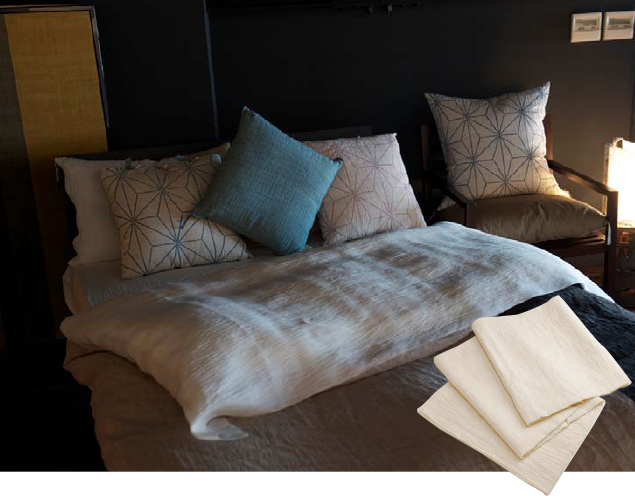 Cool to touch in summer, chijimi is used not only for kimono fabric, but also adds a pleasant touch to daily life in summer when used for bed linen and other household items. 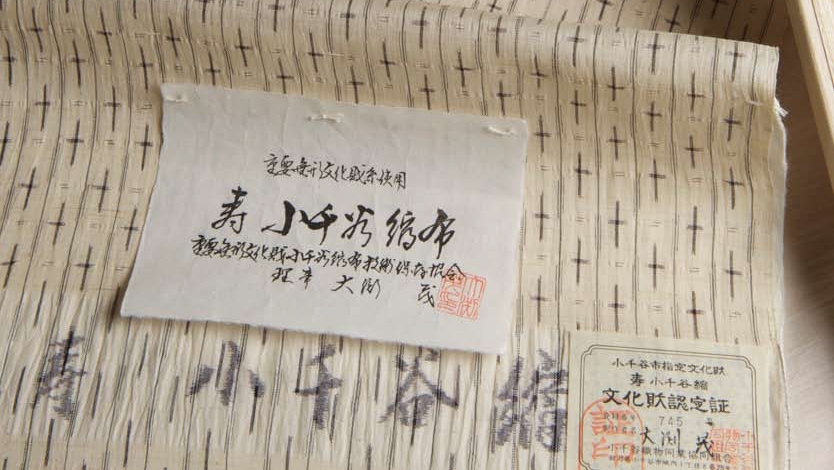 A piece of Ojiya-chijimi kimono fabric designated an Important Intangible Cultural Property. Only a few pieces of this are completed each year, as every piece of this first-rate hand-made fabric must pass through many stages of production.