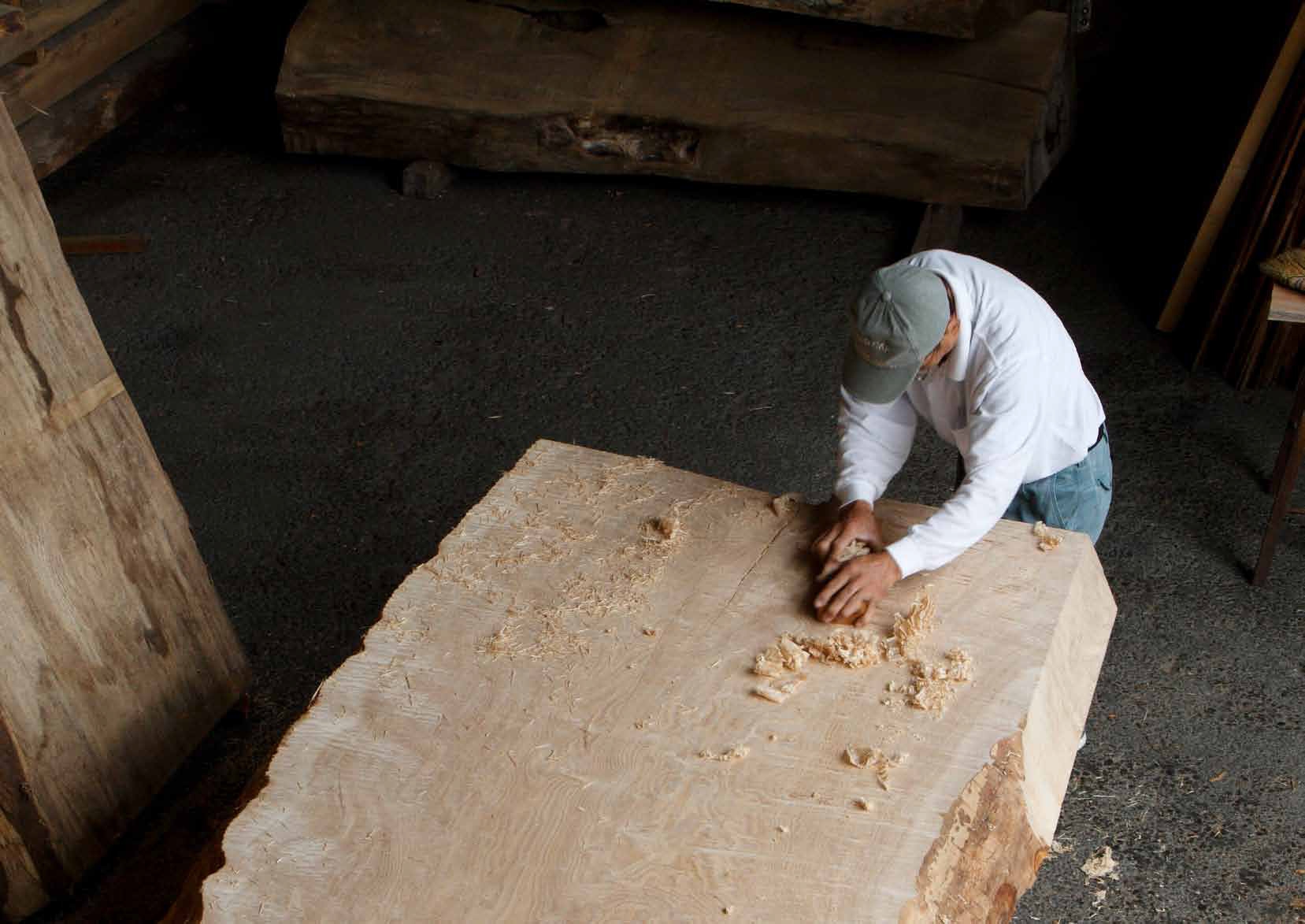 Warmth and solidity, and the burnished glow of wood grain:
Japanese furniture has an exceptional presence,
Even more so when the wood used is so remarkable.
With centuries-old precious woods exceedingly rare today, we visited the workshop of a cabinetmaker who insists on using only natural wood.

Thousands of pieces of precious wood, gathered from throughout Japan.

A massive warehouse surrounded by trees at the foot of Mt. Fuji. Opening the door, I’m surrounded on all sides by piles of lumber, some of the pieces taller than myself, closing in like a mountain range. Pieces of fine wood numbering in the thousands, too heavy for one person to carry, lie covered in dust. Seeing me staring at them wordlessly, Toshio Oyamada says, a bit shame-faced, “I guess I got a little carried away.”
The temperatures, seasonal changes, dryness of the air, and other conditions around Mt. Fuji make the region ideal land for storing and working with natural wood. While the area prospered as a center for handmade furniture through about 1955, it eventually bowed to the popularity of steel furniture, and one by one the region’s skilled cabinetmakers disappeared. It was in the late 1980s that Mr. Oyamada decided to revive cabinetmaking here at the northern foot of Mt. Fuji, spending nearly a billion yen to buy up choice wood from around the country, and devoting himself to building furniture. He does more than just make furniture himself; to nurture a new generation of traditional Japanese cabinetmakers, he’ s supervised dozens of young people, and invested his own funds. And yet, not even a handful of them have fully grown into the craft. While cabinetmaking certainly requires dexterity, in fact it is solitary work that also requires a great deal of patience. The only way to become an expert joiner is to repeat the same tasks over and over, building up experience. It’s difficult to expect young people today to have the patience to get that far.

Mr. Oyamada was born in the town of Fujiyoshida in 1938, the sixth of eleven children of parents who owned a gardening business. After graduating from middle school, he served as a live-in apprentice at Ito Woodworking, in the Okuchi section of Yokohama’s Kanagawa Ward, and there he learned the basics of cabinetmaking. Under the master’s supervision, he learned to identify the properties of various woods, how to cut wood within the smallest tolerances and match hand-crafted interior fittings, and even acquired the techniques for creating curved kumiko (mullion work), which require sophisticated design skills. Mr. Oyamada, with his dexterous fingers and his powerful attraction to the beauty of wood, rapidly improved his skills, and eventually struck out on his own while still a young man.

After about 1960, however, a more Western lifestyle began taking hold, particularly in the cities, and orders for fittings and joinery work fell precipitously. Against his will, Mr. Oyamada put away his woodworking, and made a switch to working with steel, boilers, and construction. This proved a success, and he soon saw his company performance soar. Once his business was doing well, he got the itch to return to the fitting and joinery work he’d once put away. In the latter half of the 1980s, he turned his ample funds to collecting fine wood, and eventually poured himself into cabinetmaking with an even greater fervor than before.
With the 1990 enforcement of regulations which brought about the collapse of the bubble economy, however, his once-thriving company took a turn for the worse. This brought about a serious cash-flow problem, as did his having gotten “a little carried away” with his wood collection. Fortunately, his family came together to weather the crisis, and all is well today, but as always, his “hobby” faces some stiff criticism.
In fact, Japanese furniture can be quite expensive, and is costly to make. There is no doubt, though, that all who see it and touch it are immediately captivated. This is nothing less than the product of the art created through the meeting of solid wood and the joiner’s craft. This heavy, Japanese-style sideboard (W2100 x D600 x H1200) won an award for excellence at a nationwide furnishings exhibition held in 2011. Zelkova with a lacquer finish. The top panel is a single, solid piece of wood, and the legs are also thick, giving the piece a sense of weight. The doors used as shutters to the left and right are made of strips of wood cut in a narrow wave-like shape and woven together. While they look like a single piece of wood, as seen in the photo they can actually be rolled up. It takes a full day to produce just one of these wavy strips, and all of them together required four months of work.

A square brazier making extensive use of dovetail joinery (W950 x D480 x H400). Ash with a lacquer finish. A masterpiece that conveys the culture of Edo-era joinery.

All of Mr. Oyamada’s furniture pieces carry on designs found in traditional Japanese furniture. They aren’t a slave to the times, and have a stateliness about them. It’s surprising how much one piece, positioned alone in an empty space, can give off a certain aura. Traditional skills are brought to bear in finishing the pieces down to the last, elaborate detail, bringing out the spectacular beauty of the wood. This is truly furniture as art, and why such lavish attention is required to create them.
Materials are limited to natural woods.
These are typically deciduous broadleaf trees that grow in Hokkaido or near the foot of Mt. Fuji, places with major temperature gaps, and include zelkova, Castor-Aralia (Japanese kalopanax), ash, oak, and other trees known for their beautiful grain. These trees tend to contract as the moisture they hold changes, easily distorting their shape.
This is why wood acquired as logs needs to dry for between at least 4 to 10 years or more. Once that process is complete, the wood is split into the parts needed to make furniture, and these are then put through a forced drying process for another 15 days.
Once they are completely dried, reducing their water content to between 5 and 7 percent, the pieces can finally be used in making furniture, but the amount that can be used represents just 25% of the wood from the original, unprocessed log.

A very important part of the drying process is the kidori, or the task of converting the log to timber, cutting the lumber to ensure that the growth rings that extend in a circle from the center of the log are beautifully reflected as wood grain in the individual slabs.
Only the gods know for sure what kinds of patterns the growth rings have created within the log, and this is why the ability to sense these patterns is said to be essential to the kidori process. A log, once cut, can’ t be uncut, and the work requires nerves of steel. Gi-ichi Takemoto, a cabinetmaker who once apprenticed under Mr. Oyamada, put it this way. “You’re working with a tree that is four or five hundred years old. And someone comes along who’s only been around fifty years or so, and who wants to cut that tree up and turn it into something. It’s like going into battle. On the one hand you look forward to it, but you’re also awed at the thought. What a person can make of it depends, I think, not only on his skill, but to a large extent on the mental side of things.”

Incidentally, Japanese cabinetmakers are known as sashimono-shi, or “joiners,” and this “joinery” refers to the process of building things by fitting together boards or pieces of lumber.
In building a chest of drawers, for example, it is important to ensure that the front or side pieces do not come off due to the weight put on them, or how they’re used, or twisting or cracking of the wood. The advanced joinery techniques used in these joint sections include the miter joint and the dovetail joint. They use no nails of any kind, but once the pieces are fitted together, they never come apart.
For example, the corners of Mr. Oyamada’ s square brazier use a dovetail joint, which is assembled and then polished. This is designed to beautifully bring out the pattern of the seam on the grain of the inner surface of the wood, an effect that is truly eye-catching. But as even Mr. Takemoto, a craftsman himself, points out, it takes a great deal of trouble, and is both a difficult and a delicate task.
Perhaps in the end, the quality of a piece of furniture depends on how insistent the craftsman and his client are about the quality of the wood and the techniques that go into its making. In that sense, Mr. Oyamada’s cabinetry is a valuable asset to Japanese furniture.

A screen titled “Mt. Fuji with Seine Net,” dedicated to Omuro Sengen Shrine. Mr. Oyamada made this when he was 20, and while simple and elegant, the skill that went into the delicate and difficult curved kumiko (mullion work) is evident. The lines of the seine net are beautifully, sharply brought together, a feat of craftsmanship that would be difficult to replicate. While the art of the curved kumiko died out for a time, in 2009 Mr. Oyamada started supervising seminars on the subject, and in three years a total of 1,000 people have participated from around the country. The techniques are quietly making a comeback

Mr. Oyamada’s furniture is notable for the fine finish work taken down to the last detail.
Drawers that fit precisely and don’t rattle, but that open and close smoothly.

This kind of perfectly finished dovetail joinery brings out the beauty of the wood’s grain. A testament to the work that goes into assembling, and then polishing the piece.

A mirror frame inlaid with mother-of-pearl. A beautiful example of the craftsman’s skill.