Keeping the City Clean (3) Tokyo Metropolitan Government Bureau of Construction
By JQR Editorial Staff
Clean, trash-free roads help ensure the safety and security of the people and cars that use them.
March 23, 2015
Share
Tweet 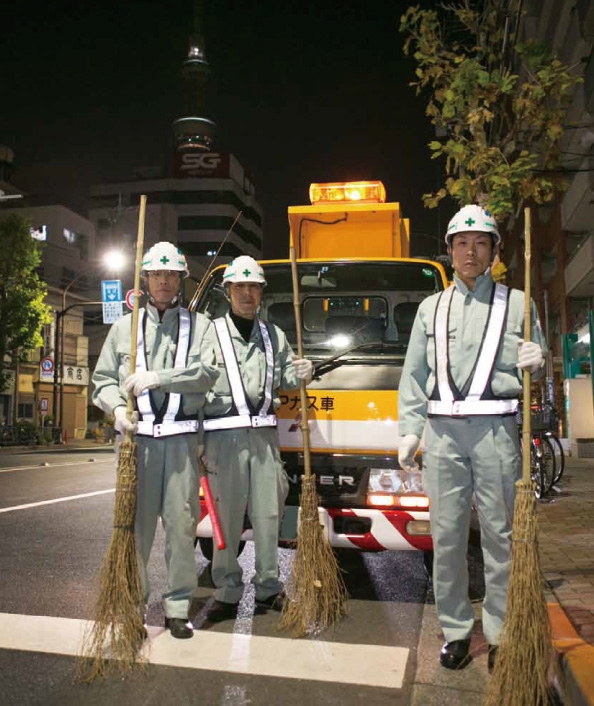 The three workers in the lead car are there to “research” road surface conditions ahead of the rest of the team. They have the exacting job of sweeping together trash and otherwise making it easier for the vehicles that follow to do their work.

“I think the Japanese peoples’ love of cleanliness is what keeps our towns looking so nice,” says Kenta Nagao, head of the Maintenance and Repair Section of the No. 6 Construction Office.

In the aftermath of the Great East Japan Earthquake, the number of bicyclists in Tokyo has risen sharply.
Since they compete with motorcycles and cars for space on the road, close calls are naturally a more common sight as well. A sudden, unexpected spill can be a major threat to any vehicle behind the bicycle, and could result in tragedy. Trash large and small, sand, and other refuse land on our roadways every day, a danger not only to bicycles, but to vehicles which risk loss of traction or a flat tire.
Overall, Japan’s roads are clean and in good condition, but in reality, the “beauty” of the roads also contributes in no small part to preventing traffic accidents. Street cleaning duties in Tokyo’s 23 wards are divided among 26 blocks. Each block consists of six routes, though the frequency with which they are cleaned depends on the volume of traffic and the size of the roads. Each of the routes is about 40km in length, and the cleaning trucks ply these routes in order.
Teams are made up of four cleaning trucks, each painted yellow and white. The lineup starts with a truck known as the lead vehicle, followed by the sprinkler, which carries a tank of water, the odd-looking sweeper, equipped with brushes on all sides, and lastly a large dump truck. Street cleaning in Japan was first automated in 1959, and gained momentum in 1961 with the import of the first road sweeper.
This quartet of trucks crisscrosses Tokyo in the middle of the night, gathering and disposing of refuse from every inch of the city’s roads.
Before starting work, each team confirms its route for the night and inspects its vehicles, leaving the depot at 9 p.m. They return at about 5 a.m., after almost eight hours of work. They clean and inspect their vehicles again and submit their reports; by the time they’re finished, it’s nearly 7 a.m. The work consists primarily, of course, of collecting any refuse that might interfere with safe passage on the roads, but workers are careful not to miss any trash on the sidewalks as well. Trash build-up in the ditches can also cause roads to flood in the case of a major rain, so they make sure to remove that as well. “Plastic bags are the biggest danger. Picked up by the wind, they can get stuck on a vehicle’s windshield, which could lead to a major accident.”
So said Koichi Mochizuki, head of the safety committee of the Tokyo Road Management Association’s Technical Section. Work is carried out in the middle of the night, when pedestrian and vehicular traffic volumes are low, and the street cleaning trucks move at just 6km an hour. Still, safety checks are essential. “Workers sometimes have to take care of drunks on the street, and bicycles are a particular danger.
Near misses caused by people rushing to get home and trying to overtake the cleaning vehicles are a continual problem. Some drivers will tailgate behind the slow-moving trucks.”

As much as eight tons of trash a day is collected from road surfaces.

“A total of 250,000 kilometers of roadway are cleaned in Tokyo’s 23 wards each year. On any day, about 100 vehicles are on the roads cleaning, picking up nearly eight tons of trash. That’s more than 2,000 tons a year (in fiscal 2011).”
That description was provided by Kenta Nagao, head of the Maintenance and Repair Section of Tokyo’s No. 6 Construction Office, responsible for road construction and maintenance in the city’s Adachi, Arakawa, Kita, Taito, and Bunkyo wards.
With 13 million residents, Tokyo has seen a diversification of opinion about its roads and urban development. Some people say the roads should be more bicyclefriendly, while others call for more extensive greenery.
“Our job is to develop our urban spaces in response to a wide range of opinions,” notes Mr. Nagao. “While we are involved in putting bicycle lanes in place and planting trees along our roads, it is also important that we maintain the roads so that they can be used safely and comfortably. Street cleaning is essential to this effort.”
If you cast your eye to the streets during the morning work and school commute, you’ll find the roads clean, completely free of any trash that littered them the night before. It sure feels great to be able to walk in safety, enjoying the scenery.

Did you know? More about the four-truck caravan that cleans our roads at night.
Scrupulous Cleaning Requires Teamwork

We interrupted a cleaning crew for an on-the-spot report. These professionals quickly assess road conditions and use teamwork to doggedly go after any trash. This is how our roads are kept so clean.

Quickly assesses and decides how to deal with any trash.
The three workers on this truck go out about an hour ahead of the others to check the route. They get off to sweep up any refuse they find on sidewalks and other areas the sweeper truck can’t reach. They also remove any large trash that would disrupt the work of the trucks that follow.

Sprays water to keep down any dust raised by the sweeper.
Before the sweeper that follows goes to work with its brushes, This truck sprays the edges of the road with water, helping to hold down the dust. The tank holds 6,500 liters. They’ll carry less water in winter to keep the water in the tank from freezing.

The road-cleaning team lines up for work. From right, the lead vehicle, sprinkler truck, sweeper, and dump truck.

The star of the show takes in all the trash.
The sweeper, designed on three wheels for a tighter turning radius, uses rotating brushes to pull in trash and fallen leaves that have accumulated along the side of the road, storing them in the hopper on the front. Because the truck sits so high, the operator uses six mirrors on all four sides to check the position of the brushes.