Keeping the City Clean (6) Tokyo MK Corporation
By JQR Editorial Staff
Drivers pay attention to their own appearance, as well as any stains or odors in their vehicles
March 23, 2015
Share
Tweet 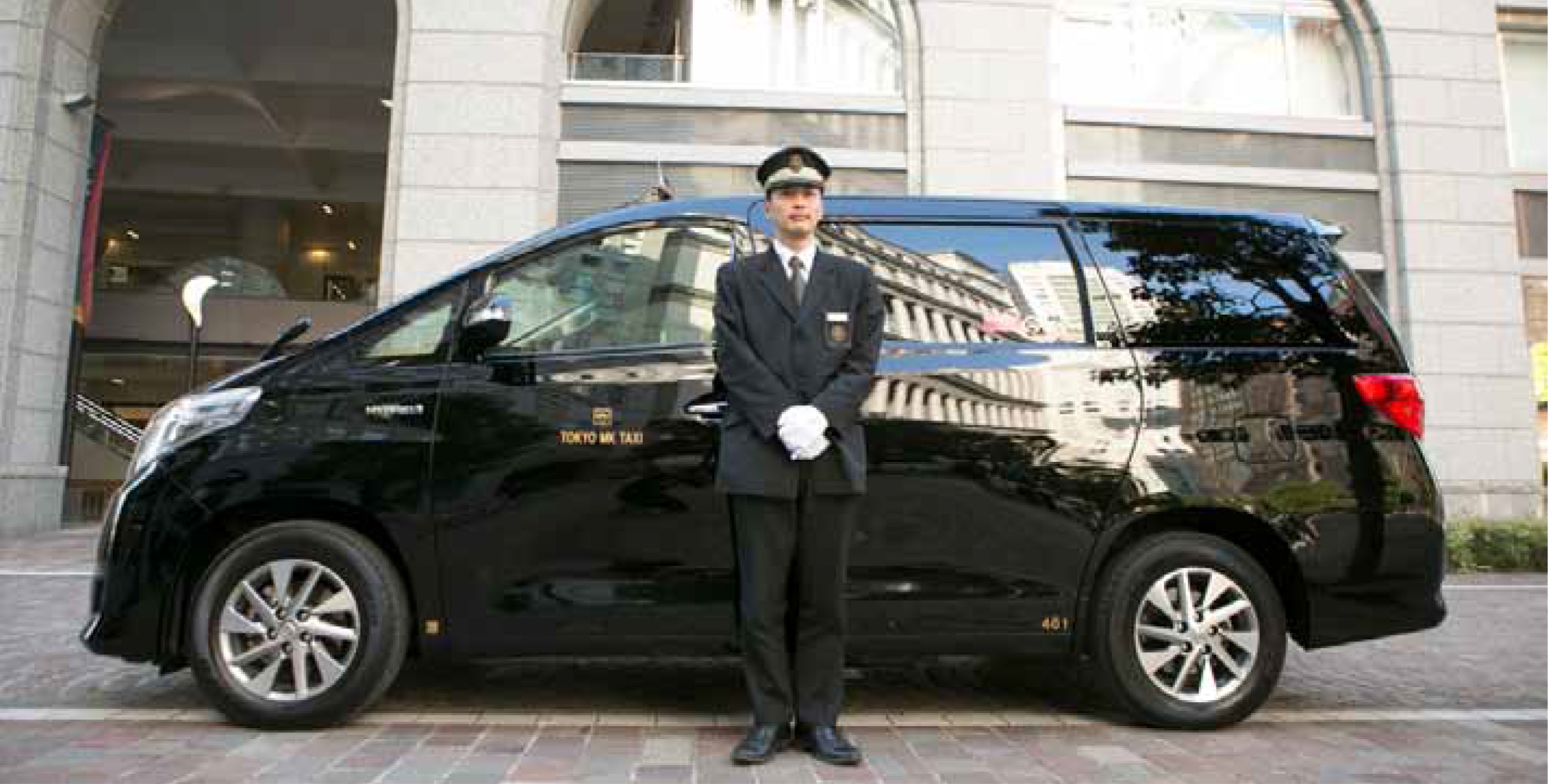 “Cleaning and greeting are something that anyone can do, but it’s not easy to make them habitual.” (Saito)

Most of the taxis cruising the streets of Tokyo are new, and their interiors are usually clean. You can hail any cab from the street and rarely be annoyed by filthy backseats.
Meticulous devotion to cleanliness is a common trait among the Japanese, but MK has taken it to extremes. Its fleet of taxis is always squeaky clean inside and out.
Since its foundation in Kyoto in 1960, MK has insisted on absolute cleanliness, along with a special emphasis placed on aisatsu, or greetings, as part of its efforts to differentiate itself from the rest of the taxi companies. According to Yoshito Saito, Assistant Head of Global Business Promotion at MK, “Back then, taxi drivers merely acted as vehicle operators whose task was to transport passengers from one point to another, and they didn’t realize that a taxi service is a hospitality business too. That’s why MK decided to stress on cleanliness and greetings on an ongoing basis in an effort to change the image of cab drivers, because these were things that anyone could do.”
When reporting to work, MK drivers are told to call out a greeting in a crisp voice. They then dash to the garage to inspect their vehicles for cleanliness. Even the slightest stain is not tolerated, and vehicles that don’t meet the cleanliness standards are not allowed to leave the garage.
The drivers must meticulously remove any dirt or impurity, including all visible debris and lint on the floor mat. They are required to keep the exterior of their cars clean as well, even when it rains. Whenever the rain stops falling, MK drivers exit their cars and wipe rain drops off the exterior. If a car gets heavily stained, even during the peak hours of business, it must be taken back to the garage for a carwash. These painstaking efforts are necessary to keep customers comfortable during their ride.
After dropping off customers at their destinations, the MK drivers typically cruise around a little and then stop to inspect the interior. “What concerns me the most is any mark left on the inner side of the windows by customers,” said Kosaku Yoshizawa, an MK driver. “Windows are prone to hand prints, and some hairdressing products leave greasy stains on the windows, so I make a point of scrutinizing the windows every time customers leave the car.”
According to Yoshizawa, the most difficult things to detect are odors. “I may get used to a smell while driving with a customer behind. In order to reset my sense of smell, I need to stop my car, get out and breathe in some fresh air before trying to detect any funny smells inside. If there is any smell in the car, I will open the windows while driving to let fresh air in.”
The drivers are also required to adhere to MK’s “personal appearance” standards. According to Saito, the MK drivers are instructed to “Keep their hair short and use unscented hairstyling products to ensure a neat, clean-cut appearance.”
During business hours, the drivers refrain from eating any odor-causing foods like garlic. In summer, they bring in an extra set of underwear and socks to change during the day.
If you happen to flag down an MK cab, you are guaranteed the finest possible ride to your destination.

1.Yoshizawa found MK’s obsession with cleanliness a bit extreme when he first joined the firm. Now that he’s picked up the habit, he is very fastidious about keeping his vehicle spotless.
2.Yoshizawa’s personal selection of cleaning paraphernalia, which are always on hand. He pays for cleaning gadgets out of his own pocket. 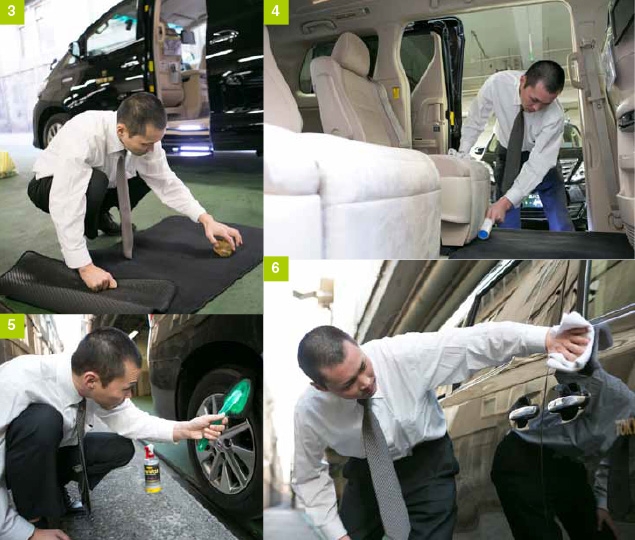 3.Floor mats are taken out for a meticulous cleaning regimen. He scrapes out sand speckles and dirt from the depth of the mats with a stiff scrubbing brush.
4.Dust and dirt on the seats and floor mats are removed with the “sticky-sheet” cleaner. Extra attention is given to the areas where passengers’ shoes are placed.
5.Dirt on the tires is removed with a brush, and the hubcaps are polished and waxed.
6.The body is polished and buffed using a towel until he can see his reflection on the surface.