How One Family Built a Tiny but Comfortable Home

Living in a spacious house in the suburbs would have meant a tiring 2.5 hour commute every day for Mr. K, but property in the city was expensive and hard to find. Building a house in the city seemed impossible. We asked the K family how they managed to build their dream home on a mere 59.49 square meters of inner city land.

The K family built their home in a quiet, affluent neighborhood ten minutes’ walk from Shibuya Station. From the outside the house appears to be extremely small, but once inside the view from the entrance opens up, preventing any impression of a cramped space. The compact design and high quality construction make this house feel very livable, even when compared to bigger, more spacious houses. When Mr. K began thinking about owning a home, he spent a lot of time debating whether it would be better to have a large house in the suburbs, or a tiny inner city residence.
“I’m a workaholic who always gets home late. If we had chosen to live in the suburbs I would have started arriving home even later, in the middle of the night. Since my wife waits up for me every night it would have placed an even greater burden on her, so I decided we should live in the city. I wanted to live somewhere in the vicinity of Shibuya if possible, because it’s an exciting place that’s always producing new culture and trends. But with the price of land there, it seemed beyond my wildest dreams. I never imagined it would be possible at all.”
However, in 2009 an unexpected opportunity arose when an acquaintance introduced them to a landowner in Shibuya and they had the chance to enter into sales negotiations.
“We talked to the landowner and told him about our dream and the kind of life we wanted to lead here. Our passion was enough to convince him to sell, in the hope that the land would be useful to someone.” The flagpole shaped plot of land was less than sixty square meters in size, which meant it was relatively cheap.
Purchasing the land made it possible for the Ks to achieve their dream of owning a home in an upmarket city neighborhood.

“Once the land purchase was settled we talked about the kind of house we wanted to build. Both of us wanted something functional yet separate from ordinary life, with a resort feel.”
Mr. K put together a summary of the concept and Mrs. K., an interior designer, drew up plans. Armed with these they visited a construction company, but were met with nothing but disappointment.
“After hearing what we wanted, the sales rep’s expression went dark and he told us it was impossible. The company would make no profit from such a project so they couldn’t do it.”
Instead they were shown the company’s own plans. They looked at these, and ask for detailed modifications, but in response the sales person only pulled out a list of options to show them. The dreams inspired by obtaining the land seemed to be tumbling down all at once. The couple decided to build a house independently and set about looking for an architect. They discovered Denso Sugiura, an architect with considerable experience in designing small, narrow houses, and went to consult him.
“When handed Mr. Sugiura our concept and designs, he said it was the first time he’d seen anyone so well prepared with such a concrete vision. The flagpole shaped plot of land, being so unusual, was a challenge that seemed to fire up his enthusiasm as an architect. When he told us he was very keen to work with us, we were so happy we could’ve jumped for joy.” 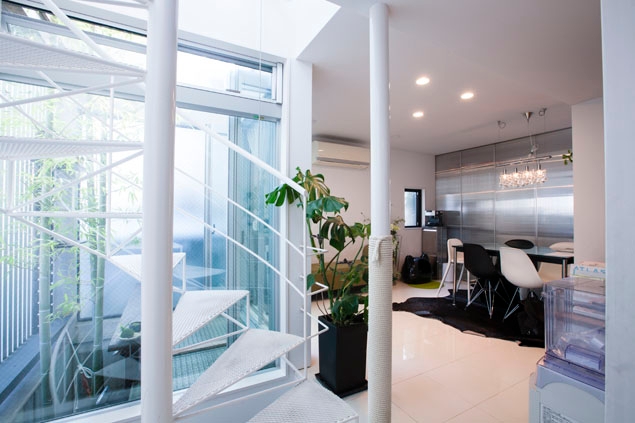 A semi-transparent partition conceals the kitchen and creates a sense of depth. Not visible in the photograph is a large screen on the right hand wall and a sofa and sound system on the left.

The K’s house makes full use of Sugiura’s “Three Principles for Space in a Tiny House.” These are: omission, transparency, and multi-functionality.
First, the omission of a dividing wall between the first-floor entrance and the LDK (living/dining area/kitchen) room maximizes the sense of space. At the same time, the entrance is positioned so as to not give a direct view into the LDK, so that anyone relaxing in the living area need not worry about being seen by visitors at the door. The living room doubles as a dining area, with a switchover in functions possible in an instant since the kitchen is concealed by a semi-transparent door. Guests passing through the living area are also spared from seeing the kitchen sink. A courtyard facing onto the LDK is walled off by glass, a transparency which creates an impression of space. This also reduces the need for lighting and ventilation, in line with the principles of omission and multi-functionality.
The underground floor also contains Mr. K’s study and his daughter’s room, plus storage space and a play area with a hammock. “We had insufficient total floor space with just two floors, but couldn’t build a three story house because of local building height regulations. However, Mr. Sugiura suggested we add a semi underground floor up to 1.4 meters deep, which wouldn’t be a problem legally and would also reduce property taxes.”
Light filtering in from upstairs and through windows into the semi-basement floor prevents it from feeling dark and oppressive. The concrete walls also provide effective soundproofing, which means the family can play the piano and not attract complaints from neighbors. Large objects such as surfboards and skis can be kept in the spacious storage area.
“It was suggested that since we were living in a city center, we should take advantage of city services and use the car park space for something else, letting us build an even more comfortable home. But we stuck with our preference for a car parking space.”
The second floor bathroom is filled with soft, gentle light, and has a spacious feel reminiscent of a resort.
Privacy is a concern when building a semi open air bath in a residential area, but Sugiura solved this by utilizing the principle of transparency and fitting louvers so that nothing can be seen from the outside.

A Comfortable Home Close to Nature

Every room is well ventilated with natural air blowing through, as well as extremely bright thanks to natural light. Even though they are in the middle of a big city, the couple are awakened in their second floor bedroom every morning by the sun and the sound of birds perched on the bamboo growing in the courtyard. The power of nature is harnessed to make this house even more pleasant and comfortable. With such a high degree of perfection, you would naturally wonder about the cost.
“We stayed within the budget that we first proposed when we consulted Mr. Sugiura. We really did not expect to come as close to achieving our ideal home as we have, so when we moved in we were extremely pleased.”
Finally, we asked Miroku, the K’s daughter, what she thought of the house.
“We have fun having barbecues or making oil fondue in the courtyard. I also do my homework in there sometimes for a change. I feel really good here, spending every day with the cats. I love this house.”

1.The entrance features a direct view of the courtyard. Thanks to this there is no sense of cramped space.2.Tall bamboo grows in the courtyard. Louvers on the outer wall of the courtyard allow light from the outside to penetrate but prevent the interior from being visible from the outside.3.Gentle light penetrates through the window into the white, lightweight, spiral staircase that leads down to the basement.4.The hammock space adjoining the children’s room is a favorite of the K’s daughter.

The semi open air bath space was achieved with the help of louvers and a skylight. Soak in a luxurious bath surrounded by white walls and high quality tiles.