Sushi Dokoro Masa in Tokyo’s Shinbashi district is a surprisingly small sushi restaurant, run by a chef truly dedicated to service.Offering meticulously prepared food of outstanding flavor, it is little wonder this place is booked out for the next five years. 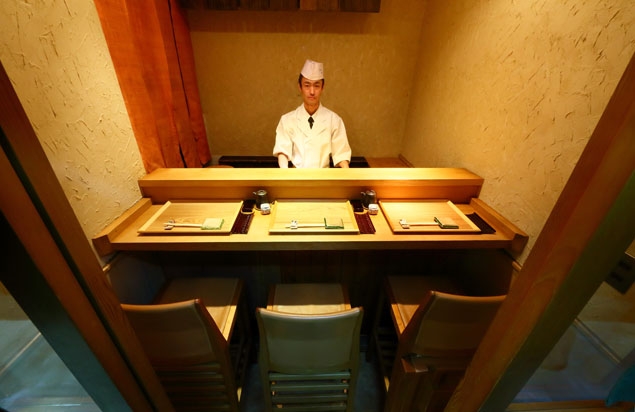 Pass through the curtain and open the door into a cube-like space completely filled by three chairs and a blond wood counter with a compact set of storage shelves behind it. At just six square meters this small, spartan space would leave any first-time visitor slightly bewildered. Welcome to Sushi Dokoro Masa.
Owner Masaru Suzuki has been running this sushi bar for six years now. His previous restaurant was much larger at just over 46 square meters, seating 30 at the counter and tables. Although business was good, it was a one-man operation. Orders did not go through smoothly, and he says customers often complained about waiting too long.
“Whenever a cluster of customers turned up at once, I’d start running behind with the orders, no matter how fast I churned out the sushi. It was hard to do the work properly, and impossible to cater to individual demands. Inevitably I gave off a pretty unfriendly vibe, which as you can imagine didn’t do much for the atmosphere. It was frustrating.”
Eventually Suzuki began to think he would rather open a sushi restaurant that was smaller in scale but would allow him to serve customers properly, and do the job the way he really wanted.

Suzuki has come up with various ingenious ways to optimally use the restaurant’s limited space. Most of his customers are couples, and a lot of reservations are for two pairs, or four people. However, there are only three seats in sight. Inquiring after the other one, we were shown an extra wooden chair stowed away upside down below one of the visible seats. The entrance, which originally consisted of a single sliding door, has also been converted into four doors that can slide left and right from the center, eliminating the need for everyone to stand up whenever one person wants to leave to go to the toilet.
Clever use of space is not just about overcoming a lack of space, but about consideration for customers. In such a small dining establishment, objects one wouldn’t normally want customers to see, such as dirty dishes, are visible. Light-reflecting stainless steel sinks and cooking utensils are not especially pleasant for customers to look at either. Suzuki therefore devised a three-tiered arrangement in which the sink sits below the chopping board, and the refrigerator below the sink.
Obviously, no matter how skillfully the space is used, it is still cramped. The inconvenience of not having room for every essential remains. There is no landline or fax for bookings. In Japanese cuisine, dishes and plates are switched with the seasons: cooling glass for summer and earthy ceramics in winter, but naturally there is no space to keep these. Suzuki stores the dishes in his garage at home, moving them to the restaurant as needed.

Small Means Efficient but Everything Needs
to be Done Solo

Sushi Dokoro Masa may be small, but it is located right next to Shinbashi Station. Rent per square meter is high, on par with street-front premises in Ginza. Meanwhile, Suzuki’s establishment only seats four, and has just two sittings a day. It seems like it would be difficult to make a living here, but the small scale means Suzuki can prepare everything himself, and in fact this is his only option. So the labor costs are zero, and food waste is virtually zero as well. Being so popular and difficult to book means only three or four cancellations a year. Even if a customer does cancel, the low numbers minimize the risk. As Suzuki notes, “Any raw ingredients I buy in must be used the same day. This was a real struggle at my previous operation. Whenever it rained, or there was some international sports match on, people would cancel and fish would go to waste, which put a serious strain on the business.”
He notes that the tiny place he has now is a more efficient and stable business. Obviously he has to do everything himself, from going to the market for ingredients early in the morning, to cleaning the restaurant after closing. Sharpening the knives, an important task, is now a ritual for his days off, but doing so leaves him free to pursue the highest quality within the confines of his budget. “It’s busy, but I can now persist until I’m happy with how the job is done, which actually makes it more fun.”

Suzuki chooses each ingredient with the greatest of care, to make sushi that meets his own strict standards. The rice is sekitori-mai grown in Saitama. This heritage variety has been used for sushi since the Edo period, but its low yield per ear led to a dramatic decline in acreage under cultivation, almost to the point of disappearance, but Suzuki managed to find a farmer still growing it. Sekitori-mai has a chewiness in the white part of the grain but is not especially sticky, allowing air to be incorporated when making the sushi, so the vinegared sushi rice melts in the mouth. The vinegar used in combination with the sekitori-mai is richly-colored red vinegar, which was also used in Edomae sushi.
Suzuki says, “I’m not trying to take everything back to Edo flavors, but if you explore how things tasted in earlier times you often find them to be unexpectedly delicious.”
In the Edo period, sushi was a food of the masses, sold on the street. In contrast, the high-end restaurants of today ooze affluence. The more you spend the better fillings you can buy, and the tastier the result. This is not necessarily a step in the wrong direction, but tracing the roots of sushi reveals that it’s also not necessarily the only proper way to do it. In Suzuki’s view, supplying delectable sushi from small street stands at an accessible price is probably what sushi shops were originally about.

Yet what if the premises were slightly larger? If he turned to one customer and chatted, he’d have less time to give to another customer. If the chef is unable to keep engaging with a customer, a first-time diner might feel excluded.
“Chatting with the chef is one of the joys of going to a sushi bar. In the place I have here, I can communicate with customers consistently on an almost one-to-one basis. Hopefully this shows them that at this establishment everything I do is for them, including the conversation. This is a no-frills operation: no feeling of high-end luxury here. But I think it offers a different kind of pampering, a different kind of enjoyment absent from more luxurious surroundings.”
Close up and personal, offering the best of service: being small allows Sushi Dokoro Masa to offer the kind of true quality time between owner and diner that is only possible when space is at a premium.