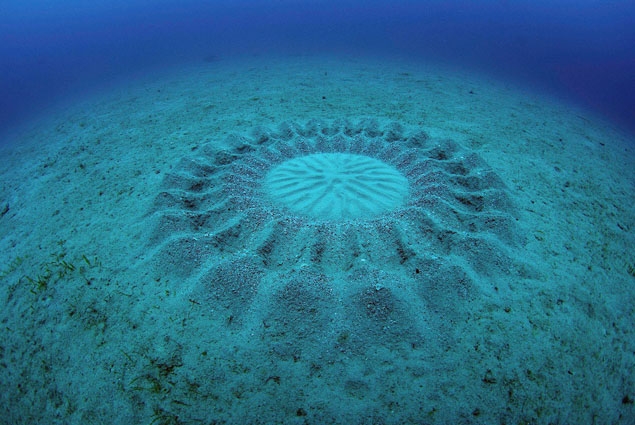 Dr. Keiichi Matsuura
Honorary researcher at the National Museum of Nature and Science. His fields of expertise include the taxonomy, classification and distribution of pufferfish, thread-sail filefish, and coral reef fishes. He is also supervising the compilation of an illustrated guide to fish.

Fifteen years ago, when humankind first entered the 21st century, beautiful designs in the sandy seabed off the coast of the island of Amami Oshima were discovered at depths of ten to thirty meters. The circular geometric patterns, as large as two meters in diameter, displayed a high degree of artistry and became a topic of much speculation amongst divers. However, nobody could work out who the artists might be.
It was discovered that the mystery circles appeared every year, from April through to August. Finally, in May 2011, underwater photographer Yoji Okata succeeded in taking a photograph of the fish responsible. When public broadcaster NHK heard about this it immediately sent a team to investigate, and National Museum of Nature and Science researcher Keiichi Matsuura began a study of the fish. Local divers worked together in an investigation that took approximately two years and led to the conclusion that this was a new species of pufferfish. Matsuura published a paper on these findings in September 2014, and the new species was named the white-spotted pufferfish.
The International Institute for Species Exploration and the State University of New York College of Environmental Science and Forestry selected the white-spotted pufferfish as one of the top ten new species for 2015. As many as approximately 18,000 new species are registered every year, but this was the first time a species indigenous to Japan had ever been selected for the top ten list. Its unique habit of making artistic circles in the seabed was apparently highly rated.

The Spawning Nest that Takes a Week to Make

The investigation ascertained that the circle is actually a nest for females to lay eggs in. Male fish, approximately 12 cm in length, dig up the sand with their bodies in order to attract a female and have them spawn there. The circular geometric design takes approximately one week to complete. Females lay their eggs in the center of the circles, and the complicated design helps direct the current toward the center, thus supplying fresh seawater to the eggs. Other fish also make nests for spawning, but it is extremely rare for them to be as elaborate as this.
“The number of radiating lines in the nests varies from twenty four to thirty, indicating individual differences between fish, and my guess is that the level of workmanship is what determines the males’ success in attracting females. This fish has other fascinating behaviors, such as decorating around the edge of the nest while separating out debris and shells,”said Matsuura.
The mysterious white-spotted pufferfish seems likely to provide material for research for a long time to come.