(The Business of Having Faith in Humanity No.1) Unattended Vegetable Stands Use the Honor System

You see heaps of fresh vegetables sitting on the roadside, and no vendor in sight. The situation seems to be dangerously tempting.
Yet, shoppers who use this unique system known as oki yasai, which literally means “leaving vegetables” at an unattended roadside stand, do leave the asking price in the money box, believe it or not.
This method of doing business, known as senyou kouri or “use first, pay later”, was started some 300 years ago by medicine merchants from Toyama Prefecture who sold household drugs throughout Japan, something that continues to this day.
Using a similar strategy, some snack-food manufacturers leave candy bars and other snack items in offices at no charge, on the understanding that payment for consumed items will be collected later when they come to replenish the supply. This business model, while limited to transactions involving small amounts of money, rests on the seller’s trust in the buyers’ honesty. 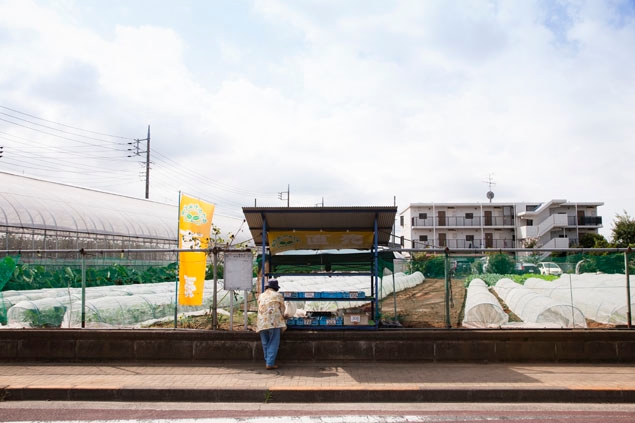 An unattended vegetable stand. It may be a familiar sight for the Japanese, but the more you think about the system, the weirder it gets.

Oki-yasai is trusted by shoppers, who love the freshness of just-harvested vegetables and the assurance derived from knowing who produce them. One lady I met during my field trip informed me that she sometimes calls up a local farmer with an unmanned stand, telling him to leave certain vegetables she needs for the next day at the stand. Little did I know that you can also make a “reservation” for vegetables you want. But I guess the farmer will just “leave” the vegetables for you – un-earmarked. What if someone else grabs the veggies before you do? The lady was all smiles when she told me of this secret, and I didn’t dare say anything skeptical to her for fear that I would rain on her parade.
The farms I visited for this article are situated in Tokyo’s Setagaya Ward. Setagaya is known for its exclusive residential sections, but a limited number of farms and forests still remain. Over 80 percent of the farms in Setagaya are smaller than 50 acres. According to Satoshi Kaneko of JA Chuo’s Kinuta District, farmers in Setagaya typically produce small quantities of a variety of vegetables, which are mostly distributed locally through direct sales by the farmers themselves and group sales organized by local agricultural cooperatives.
So oki-yasai is a source of income for farmers, but they are willing to leave their place of business unattended. With no one watching over the merchandise or the money tendered, the system does not work unless the seller trusts in the honesty of strangers. The rate of collection is fairly high at 80 to 90 percent, but it is not 100 percent. To cope with theft, a growing number of farmers install vending machines styled in the fashion of coin-operated lockers. This guarantees money collection, but patrons complain that they do not get to touch and feel the vegetables before they buy.

Patrons love the freshness and reasonable price of the local produce at the stand. Brisk sales begin as soon as vegetables arrive at the stand.

All vegetables on sale are harvested that very morning. Bright and lively colors abound. Sales end when the supply is sold out. Farmers do not replenish vegetables until the next day.

“Local residents buy from me because they trust me and my vegetables.”

Yoshihiko Ishii’s family has operated a farm for generations, ever since the Edo Period. When I arrived at his vegetable stand at around nine in the morning he was lining it with just-harvested vegetables. Passers-by immediately took notice and gathered around the stand. No sooner had he put down a veggie than a customer grabbed it. Ishii produces about 40 varieties of vegetable every year and his stand features four or five different vegetables each day.
“When the crop I harvest and put up for sale on any given day is especially good, I receive compliments from customers the next day. . Sales are a good gauge of the quality of the vegetables I produce.”
Given the number of regular customers, I assumed a very high rate of payment collection. According to Ishii, however, the rate of collection is about 80 percent. “It doesn’t mean that 20 percent of customers cheat,” Ishii said. “A very small number of motorists drive off after grabbing whatever is in sight.” I felt sorry for him, but at the same time I began to wonder why most customers still pay when no one is watching. “Apart from the fact that the Japanese are fairly honest, I believe the most important reason is that my customers see me toil the soil every day and grow vegetables with love and care, and they appreciate my efforts.”
Ishii informed me that farms are increasingly scarce even in this part of Tokyo. I truly hope he will continue to please locals with his delicious vegetables for many years to come.

“My vegetables soak up the goodness of the sun until the moment they’re harvested, and sharing them with others is my joy.”

Michinori Saito sells 70 percent of the vegetables he produces through ordinary distribution channels and the remainder through his unattended sale stand. I was shocked to learn that he stakes 30% of his earnings on the honesty of complete strangers. Saito told me that thefts by motorists were frequent in the past, but the collection rate improved to 90 percent after he moved his stand off the street and closer to his farm. I asked Saito the same question I posed to Ishii: why do people pay when no one is watching? “I had a customer who left a note in the money box saying ‘I don’t have small change now. I promise to pay you on my next visit’,” Saito said. “And sure enough, I found the exact amount this person owed me in the money box the next day.”
Selling vegetables on the honor system poses a special set of worries in addition to the worries farmers typically face, but Saito keeps on selling this way because it “leads to more business.” “If customers realize my vegetables are good, they will come back for more. This boosts my confidence in growing vegetables. I once received a letter from a customer who raved about how the edamame soybeans he bought from me were extremely flavorful. Being appreciated by customers for the vegetables I grow with utmost care is my greatest joy.” The pride and spirit of a farmer was clearly evident in Saito’s reply.