The History of “Okigusuri” Medicine and its “Use First, Pay Later” Concept

“Toyama okigusuri” refers to a unique marketing system in which a vendor leaves a medicine chest of over-the-counter items at a customer’s home on a “use first, pay later” basis. The unique arrangement, which only requires payment for medicines used, dates back 300 years in Japan, and is now spreading to other nations. The “okigusuri story” whisks us back to feudal times in Japan… 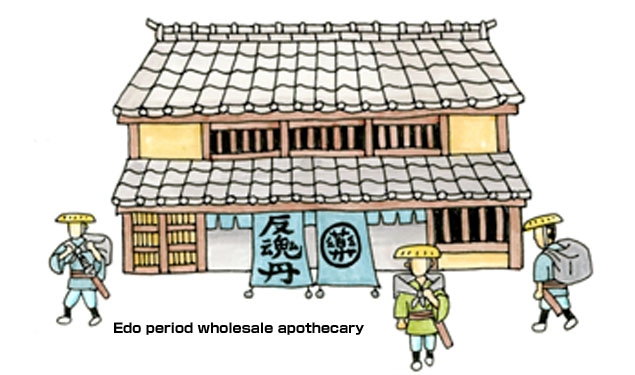 The “okigusuri business” involved apothecaries travelling the length and breadth of Japan, depositing filled medicine chests at individual homes, and returning later to replace depleted items and collect payment for products used. The system began in 1683 when feudal lord Maeda Masatoshi, head of the second fief in Toyama, took a reinvigorating “miracle medicine” known as “hangontan” entrusted to him by a doctor named Jokan Mandai from Bizen (in what is now Okayama Prefecture). The medicine worked so effectively that Lord Masatoshi henceforth always carried some in his pocket.
In 1690 on a visit to Edo Castle, Lord Masatoshi encountered Kawachinokami Akita, a fellow nobleman from Miharu (in what is now Fukushima Prefecture), who was suffering from a terrible stomachache. Lord Masatoshi shared his hangontan remedy with Akita, and the ailment vanished.
Hangontan’s curative power in the “Edo Castle Stomachache Incident” amazed the many daimyo who had assembled from near and far, and they reportedly petitioned to acquire the medicine themselves. Hangontan’s principle effect resembled that of today’s multipurpose digestive remedies. Lord Masatoshi ordered Gen’emon Matsuiya, an apothecary doing business near Toyama Castle, to fill incoming orders for hangontan from feudal lords and their retainers. Although the legend of Lord Masatoshi may be unverifiable, there is no doubt that he encouraged the cultivation of medicinal plants and studied remedial powers of various combinations. He subsequently promoted nationwide marketing of the medicine, and the “okigusuri” business run by Toyama’s merchants expanded. That business now claims a history of over 300 years.
People were undoubtedly suspicious of a sudden visit from an unknown salesman. For their part, the vendors always took pains to be attentive and discreet when entering private residences for initial sales calls.

※Hangontan is sold even today, but its current composition differs from that of the Edo period.

Trust in return for painstaking courtesy

The vendors were careful to observe every courtesy, pausing before family altars to pay respects to their customers’ ancestors. Noting the polite behavior and language of the vendor, the homeowner would extend a welcome and lend him an ear. The apothecary would then produce a medicine chest and depart without receiving any payment. He would return several months—or perhaps a year—later to collect payment for the items used.
In the Edo period, the common folk were not prosperous enough to purchase an array of medicines to keep on hand for emergencies. However, they never knew when they might fall ill. Thus, the “use first, pay later” okigusuri system, charging only for those medicines used in a crisis, absolutely delighted the consumers. No sooner did they discover that the medicines worked than they were out the door to spread the news, helping vendors increase their clientele by word of mouth.
As apothecaries thus made their pilgrimages across Japan, they would also stage follow-up visits, estimating when households needed their products replenished. Vendors accumulated data on types and quantities of medicines used, and the success rate of individual remedies, stocking up accordingly and working to deliver improved services to their customers. 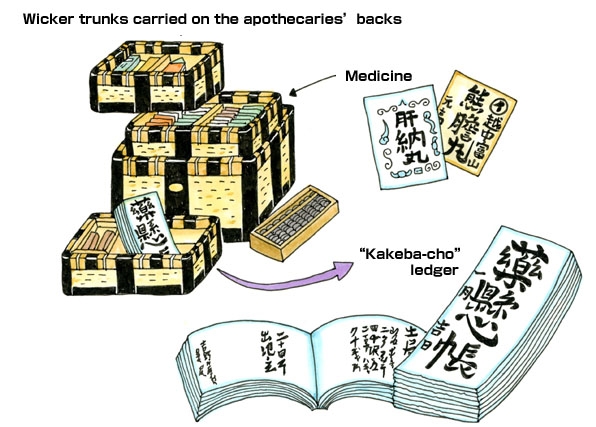 The itinerant medicine vendors worked in specified territories known as “kakeba.” They kept track of their customers in ledgers known as “kakeba-cho,” reminiscent of today’s databases. The notebooks specified type and quantity of medicines utilized, family composition/health status, and record of payment. A single glance at a ledger reveals capital turnover, the district’s favored remedies and similar data, and underscores how exceedingly rational and advanced the okigusuri business had become. As the ledgers also included credit checks made by the vendors, they were more valuable than the actual accounts receivable. Since referencing old notebooks would allow one make a quick profit, vendors were apparently able to sell them to finance their retirement.
The “database” ledger was not the only progressive aspect of the system. Souvenirs for clients were indispensable to the okigusuri business. Paper balloons, needles, lacquered chopsticks, Kutani ware bottles, sake cups, teapots, ukiyoe portraits, calendars, and their ilk—considered as sales promotion tools in today’s world—were all stocked to keep customers happy.
What pleased customers even more than the souvenirs was the chance to chat at length with the roving salesmen, who brought fresh news chanced upon in the four corners. The apothecaries produced news of the latest rice cultivation techniques, and occasionally even brought actual rice husks as well; both were said to have stimulated development of improved rice strains and cultivation skills. Thus, the role of the apothecaries traversing the nation exceeded the simple peddling of remedies. 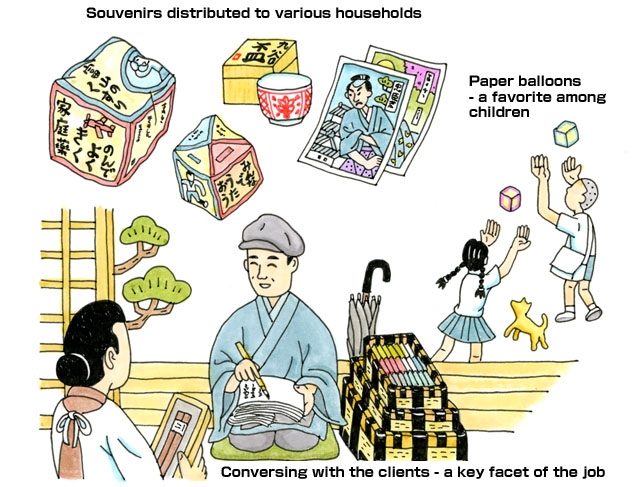 How the globalized “use first, pay later” system works

The okigusuri industry is entering the overseas market in response to requests from governments worldwide. In Mongolia, grassland nomads represent some 35% of the population. As remoteness from urban areas and infrequent income opportunities (arising a few times annually) render the “use first, pay later” system workable, Mongolia took on okigusuri as a government project in 2012. With countries such as Thailand and Myanmar also welcoming the okigusuri system, what started as a unique Japanese business model has now gone global. Meanwhile, modern Japan has seen a new “use first, pay later” business evolve in which snacks, vegetables, cosmetics, and other items are displayed in offices, with payment collected at a later date. Consumers may obtain the goods whenever the mood strikes without leaving the office, even as the providers are increasingly holding down the cost of collecting payment and enjoying their monopoly on the “office marketplace.” The okigusuri business may be old, but it is far from fading; rather, it is a groundbreaking business model.