“Office Glico” is confectionery-maker Glico's unconventional “Okigashi®” business, which involves lending out “Refresh Boxes®” (see photo) and refrigerators at no cost, and placing confectionery, ice cream, beverages, etc. on company premises. Customers simply take what they want and leave payment in the money box in this Japanese take on the archetypal office snack box. 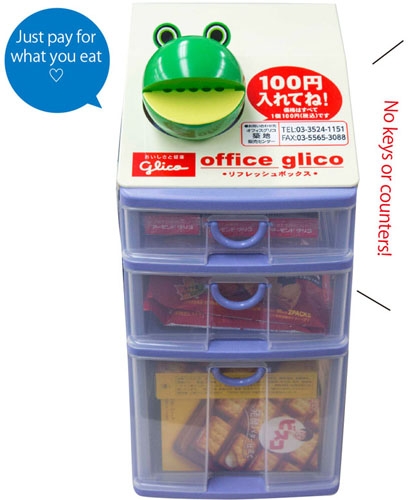 Manufacturers usually supply their goods to retailers such as supermarkets and convenience stores via wholesalers, and never sell directly to consumers. Large confectionery maker Ezaki Glico was no exception, until the company started pondering whether it could instead deliver its products directly to the public, in a departure from the conventional system. Thus the “Okigashi®” business was born.
According to Ezaki Glico's Kotaro Kawabata, “Open any office desk drawer and usually you'll find some kind of sweet treat. But few people go off to buy things like that during office hours, so it occurred to us that offices might present a new business opportunity.”
To turn this idea into reality, Kawabata assembled a project team. The aim was to meet with customers in person and help them become familiar with Ezaki Glico’s products, leading to purchases. The first sales technique the team came up with was the “station lunchbox style”, that is, having staff visit offices to sell confectionery directly.
“But when we actually tried it, having people roaming around offices calling out 'Anyone for candy?' proved to be a nuisance for customers. In the end we were limited to selling during lunchbreaks or after 6 pm, those sorts of hours. What's more, direct sales prices are low, so the financial performance was terrible and we soon abandoned that mode of selling. Then we hit on the idea of actually placing confectionery in offices.”

When it came to launching the “Okigashi®” service, one thing Glico was firm on was having the individuals using the service buy the products, rather than having their employers pay for them. Glico looked at different ways to obtain the cash from individuals, as opposed to collectively, and decided on the same method used to sell vegetables at unmanned roadside stalls, which are a common sight across Japan. “To be honest, initially we weren't confident we’d actually collect all the money owed simply by leaving a money box. During our early research, we canvassed farmers who sell vegetables using an honesty box system to find out what percentage of the amount owed for their produce was actually paid. Most said it was at least 90 percent. When you think about it, in Japan we take vending machines containing merchandise and cash for granted. My own theory is that Japanese people learn gratitude from an early age, and even if vegetables are just placed on an unmanned stall, they will picture the person who took all that trouble to grow the vegetables, and unconsciously assume they should pay the proper amount. So we decided that once people saw our staff delivering “Okigashi®” confectionery, we'd be able to collect payment even with an unlocked box.”
When they first started the “Okigashi®” service, Glico experimented with containers such as cane baskets and candy jars for the products, but these had insufficient capacity and lacked visual appeal. Eventually the company chose the current three-tier B5-size cases that could just as easily hold stationery: all the better to blend in to an office environment. Each case holds about 24 packets of candy, in roughly ten varieties. The frog money box for payments has become something of an Office Glico mascot, but is actually an off-the-shelf item.
“Most money boxes have an opening for coins in the back. We figured that since we had to have something, it might as well be a box with the slot at the front, which also added an extra element of fun to purchasing a treat. We then found these frog money boxes that one of the banks was giving away to new account-holders. They just happened to be the right size as well (laughs).”
Glico's “Okigashi®” service was not instantly accepted. Glico salespeople visiting companies were frequently rebuffed at reception without even a chance to talk about the service, let alone exchange business cards. In particular, after the 9/11 attacks companies stepped up their security, often making it difficult to just get through the door. Despite this, the profile of “Okigashi®” gradually grew, thanks to the dogged persistence of the sales team, combined with other factors such as changes in workplace culture due the growing number of younger management staff in fields such as it.

Fourteen years after launching the Office Glico “Okigashi®” service, Glico now serves around 100,000 businesses, supplying 120,000 or so boxes. Initially the service offered only confectionery items people could purchase with a single 100-yen coin, but in response to frequent requests for “something a little more filling”, plus drinks, the range has now been expanded to include ice cream, noodles, beverages and so on, at a range of prices. Glico also supplies other companies' products, catering for customer needs in categories outside its own specialization.
Following the Great East Japan Earthquake, there is a heightened awareness among companies about the need for emergency supplies, and a growing number are using the “Okigashi®” cases as substitute reserves.
“In Tokyo, a by-law designed to cater for those unable to get home during a disaster requires firms to keep three days' supply of food and water for employees, but procuring these supplies with no idea if or when they'll be used can be a significant financial burden on businesses. However, companies can use our service to have food in reserve as part of their emergency rations, at no cost to them. Office Glico also visits regularly to replace any items past their best-by date. This means that people can access products on a day-to-day basis, and also have a managed supply for emergencies. I suppose the easiest way to describe it is circulated stockpiling. In other words, merchandise control, obviously, and also quality control can be performed at no risk to those in the workplace.” Kawabata adds that the way people eat candy at work is also changing.
“There are businesses where they bring out the box, usually kept in a corner of the office, for everyone to share snacks at meetings as they talk. Casual snacking on candy seems to make for a relaxed mood, and helps break the conversational ice between management staff and those working under them.”

Over 95% of Payment Collected

So what about collecting payment, which was initially such a concern? It turns out that over 95 percent of purchases are paid for, an even higher proportion than those roadside vegetable stalls. “For example, we might find a case to be nine products down, but only 800 yen in the money box. But, next time our representative calls, there will often be 900 yen for only eight products. Presumably someone had gone to buy candy but lacked the small change, and put the cash in later. The strategy of leaving payment up to the customer has proved enormously successful, to the extent that we now have annual turnover of 5 billion yen. It's also great to see companies advertising 'Office Glico on site' as part of their appeal to new graduates.” Placing their trust in customers has allowed “Okigashi®” to grow into a huge business, despite the small size of the transactions. It would seem that sales techniques that stress communication are far from obsolete. 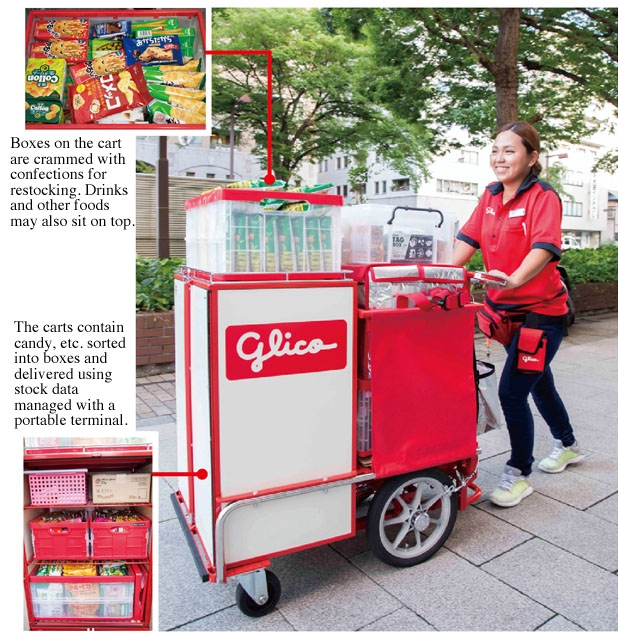 Office Glico:Ryoko Omiya
Omiya-san wears pouches around her waist, leaving her hands free for pushing the cart. Both pouches: one for the mobile merchandise control terminal, and one for a notebook and other miscellaneous items, are made to Glico specifications.

Part of the Office Glico business since 2000, and involved in the model's Tokyo rollout from the start, Kotaro Kawabata talks about how he also pounded his share of pavements, products in hand.

Office Glico is a system that allows individual employees to take confectionery, etc. when they want it and deposit payment in the attached money box. Glico covers the cost of installing cases, refrigerators, etc., and does not seek financial compensation for theft or the loss of products or cash. The project was launched in 1997, with the first sales center opening in Osaka in 1999. In 2002 Glico extended the system to Tokyo for full rollout. Glico has taken out a patent on the “Okigashi®” business model, and the service is available in metropolitan Tokyo, Yokohama, Kawasaki, Chiba, Saitama, Aichi, Osaka, Hyogo, Hiroshima, and parts of Fukuoka.