Having won first prize, Mr. Yukinari Kitamura has plenty to smile about. Momomiya sold for ¥33.1 million at auction, benefiting from the buzz surrounding the G7 summit due to be held at Ise-shima in May 2016.

The Matsusaka Beef Cattle Competition is held every November in order to find the best Matsusaka cow. A huge event, it attracts crowds of spectators not just from Matsusaka, but also nearby Tsu, Ise and elsewhere to the Matsusaka Agricultural Park Bell Farm where the competition is held. Last year (the 66th competition) there were 88 cattle entered in the preliminary round of judging, 50 of which advanced to the main competition. Following rigorous judging, a “queen” is chosen from among these premium Matsusaka beef cattle, which have been fattened for almost three years and are the pride of their farmers.
Cattle start arriving at the site just after seven in the morning, and proceed to the massive marquee that serves as a standby area. Each weighs around 650 kilograms. One might be hesitant to approach these large, powerful-looking creatures with their splendid horns and rugged features, but their big round eyes hint at great gentleness. Apparently, despite their appearance, cattle are timid creatures. It's true that things are tranquil in the tent: one would never imagine there were 50 cows tethered here.
Nine o'clock struck, and judging finally started. A number is called over of the megaphone, and the cow in question is led into the judging arena by the farmer who raised it. There are six judges, joined by six assistants to make a total of 12 on the judging panel. First they check things like the animal's size, whether it has an even covering of flesh and thus tidy proportions, its coat, and the shape of its fetlocks.
According to deputy chair of the judging panel Takeo Miyake (the senior researcher at the Mie Prefecture Livestock Research Institute mentioned on the previous page), “The benchmark is basically that for breeding cows: a healthy body with just the right amount of muscle. Ideally a fattened beast has flesh on top of that.” The judges move unhurriedly among the cattle, scrutinizing them from all angles. Occasionally they crouch down and peer up from underneath, checking for any scratches or skin blemishes around the belly. Even the slightest swelling inside the legs will be noted.
Once the first round of judging is complete, the cow returns to the marquee, before being called out again a short while later, this time to determine its merits by comparison with a handful of others. Judges have the animals line up for omparison, reposition them, and then study them again. This process is repeated several times to allow the judges to identify even tiny variations in quality.

Under the watchful eyes of the crowd, judging continues in order to find which animal has earned the top honor

“With that kind of money riding on it, the judges have to be sure,” says Miyake. By “that kind of money”, he means the price at auction. The difference between first and second place is enormous. For example, on this occasion the top-placed cow sold for just over 33 million yen. The runner-up came in at 6.7 million, a difference of over 26 million yen. This is fifteen times the value of the average cattle beast, and the reason why the judging must be scrupulously fair.
As the judging progressed, eventually only the finest examples of Matsusaka cattle remained in the ring.
By this stage, to the amateur eye it was hard to discern any obvious differences between the cows, and the farmers, swallowing hard, kept their gaze fixed firmly on the conferring judges. At last a consensus seemed to have been reached, and Mie Prefecture Livestock Research Institute senior researcher Toshihide Okamoto, chair of the judging panel, stepped up to the microphone. For a brief moment the tension in the arena was palpable. Okamoto gave a brief and informative outline of the judging process, before declaring the winner to be entry number 15, Momomiya. The crowd erupted, cheers rang out, and winning entrant Yukinari Kitamura and his prize cow were immediately mobbed by reporters seeking interviews.
The Matsusaka beef cattle competition, launched in 1949, is a high point of the calendar for the farmers who fatten premium Matsusaka cattle for market. Every one of them strives to achieve a win in the competition, which in turn helps to maintain the superlative quality of premium Matsusaka beef.
At the award ceremony, which began at noon, the winner was congratulated by the governor of Mie Prefecture, the mayor of Matsusaka, and other luminaries. This was followed by a public auction that started at 1 p.m. Numbers lit up the electronic display as the auctioneer made his calls. 3,700,000-, 3,800,000-, 3,900,000- ...at 4,000,000- spontaneous applause broke out. In 2002 the top cow sold for 50 million yen. The Matsusaka Beef Cattle Competition is a huge event that encapsulates the spirit of the Matsusaka beef brand. 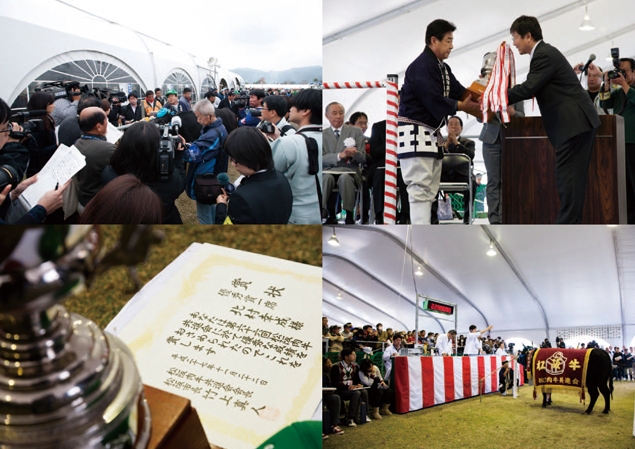 Winning first prize at the Matsusaka beef cattle competition is a great honor. From the award ceremony to the auction, spectat ors filled the venue, greeting each rising bid with enthusiastic applause.