Japanese culture has spread its influence worldwide in a number of ways. Early European artists and designers found inspiration in Japanese art, clothing, and architecture. Others have enjoyed the practice of Japanese craft-making, martial arts, and philosophy. And today, it’s hard to find anyone who hasn’t seen by manga, anime or video games. But the introduction of Japanese food to new cultures has a history that is perhaps the most interesting and the most complex of all.

At a recent lecture titled “The Global Izakaya: The Trans-Urbanization of Japanese Restaurant Cuisine,” given at Tokyo’s Sophia University, Professor James Farrer presents the results of his research (as well of that of his associates David Wank, Chuanfei Wang, Christian Hess, Monica R. de Carvalho, and Lenka Vyletalova) on how this style of dining has spread overseas to become a form of “urban adventure” that has expanded far beyond its Japanese roots. 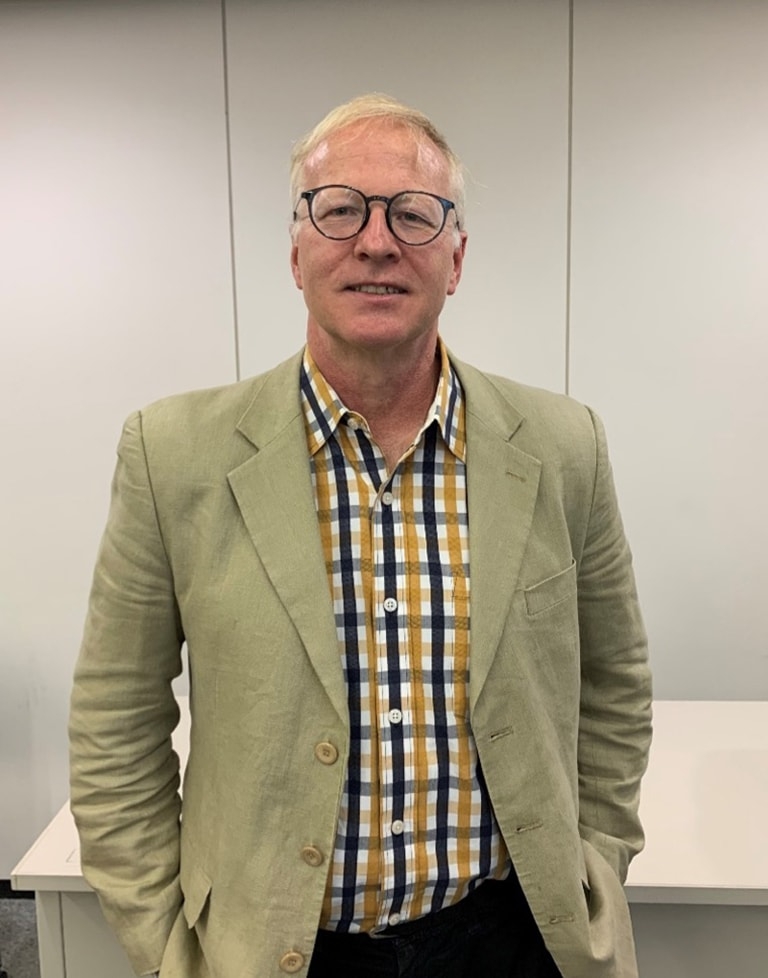 What is an Izakaya?

The izakaya is a style of eatery that can be found nearly everywhere in Japan. Izakaya are not defined by a particular dish, the way that sushi or ramen restaurants are, but by the way in which they are enjoyed. With a name that literally means “shop where there is alcohol,” an izakaya is primarily a drinking spot, and the customers are typically adults who are there to eat and drink after a hard day at work. The roots of the izakaya are urban and working class: menus typically feature a wide, almost chaotic, range of small dishes that are traditionally low in cost and simple to prepare (at least in comparison to the prices and artistry associated with sushi restaurants), and are intended to be enjoyed alongside the heavy consumption of beer, sake or shochu (a Japanese distilled spirit made from grain or potatoes). Above all, the atmosphere in an izakaya is causal, friendly, and loud: these are not places for quiet contemplation but for friends to socialize and have fun.

Sushi and ramen have become big hits overseas, as did sukiyaki and teppanyaki before them.

But how does one introduce a Japanese restaurant that doesn’t have a signature dish? Additionally, Japanese cuisine has traditionally used exoticism as a marketing tool, such as having sukiyaki waitresses dressed in geisha-style kimonos, teppanyaki chefs putting on acrobatic knife performances, or sushi chefs displaying the delicate intricacies of their craft. It has also been marketed with rare and expensive ingredients like Kobe beef, unagi eel, or prime cuts of tuna. Japanese cuisine has also gained an image overseas as healthier and lighter than most other styles of food. None of these, however, are typical features of izakaya, where the customers enjoy themselves over food that is generally higher in calories than in price. 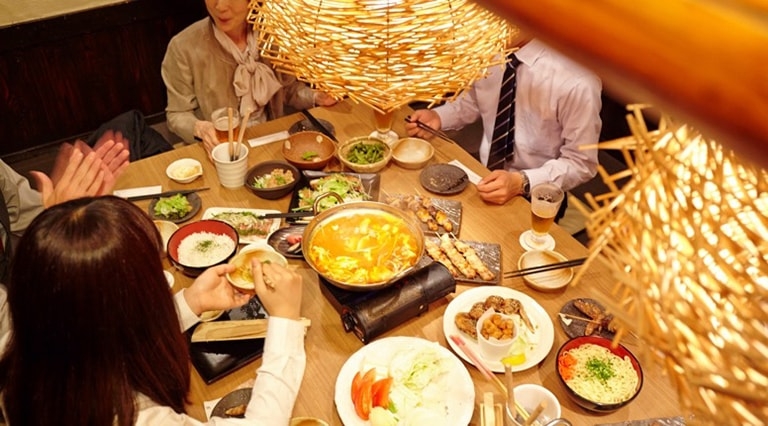 Izakaya is a place for food, drinks and friends

Professor Farrer identifies three distinct waves that have taken place as izakaya have evolved from a uniquely Japanese style of dining into a truly global phenomenon. The first wave took place during the 1970s and 80s, the ‘Bubble Era’ when Japanese corporations and trading houses used their growing wealth to set up offices in the US and Europe. These branches were almost fully staffed with salarymen transferred directly from Japan, many of whom longed for a reminder of home. To cater to this growing demand, entrepreneurial Japanese expats opened some of the first overseas izakaya. These ‘first wave’ izakaya were almost exactly like the ones the office workers had left behind: offering Japanese dishes, Japanese sake, and Japanese staff who spoke Japanese.

By the 1990s, however, the Bubble Era had burst, and Japanese companies were scaling back their overseas operations. The first-wave izakaya found they could no longer survive on the shrinking expat population, and most of them closed up shop. But in their wake a new generation of restauranteurs arrived to open what would become the second wave of izakaya.

The second-wave restaurants were designed for international customers. Since restaurant-goers in America and Europe were more familiar with the quiet elegance of sushi shops than the boisterous atmosphere of the izakaya, the owners had to find innovative ways to translate the izakaya concept into something that customers would understand. This meant parting ways from the traditional izakaya of Japan and adopting new and sometimes unorthodox methods.

Many of the second-wave izakaya were founded by Japanese immigrants and expats who understood the local overseas culture and could adapt this style of dining to a wider audience. More recently, Japanese restaurant chains have entered the picture, hoping to boost sales by expanding globally. Village Yokocho, one of the early second-wave izakaya, was started by the owner of a popular bar called Angel’s Share. Located in New York City’s Japantown, Angel’s Share was already popular among young New Yorkers for introducing Japanese-style cocktails, and many bar patrons would first stop at Village Yokocho next door to enjoy yakitori chicken skewers over beer and sake. In Dusseldorf, Germany, the proprietor of a formerly first-wave izakaya put out signs to explain the izakaya concept, including the phrase “share – eat – laugh – cry” to emphasize how izakaya are places of socializing and communicating.

In order to attract customers, many of these new izakaya adapted to local tastes by offering dishes made with local ingredients. This strategy is not too different from Japan, where most izakaya offer regional specialties. In some cases, the idea was communicated by combining well-known concepts, such as advertising izakaya as “Japanese tapas,” as many were already familiar with Spanish dining style of ordering many small dishes with drinks. And for most of them, it meant adapting the restaurant space to create a strikingly exotic visual experience that clearly reflected the imagery of Japan. These restaurants gained in popularity, and as a result izakaya overseas became a high-end dining experience for upper-class urbanites and tourists, in contrast to the lower priced versions in Japan.

To help explain just why the izakaya concept has taken hold in so many places, Professor Farrar referenced an article from the magazine Time Out New York. “It says, ‘Everyone in New York is obsessed with Tokyo,’ and it goes on to say that Tokyo is the most popular city in every city that they interviewed people, and New York is second.” This love for Tokyo is playing a role in how eagerly izakaya are being adopted. As they grew in popularity with locals, they began to become tourist destinations, especially in cities like New York, Los Angeles, and Berlin. In New York in particular, notes Professor Farrar, many of the second-wave izakaya have built up a good reputation with tourists from China and other parts of Asia, including some from Japan. They have also been spreading successfully outside of the US and Europe, with entrepreneurs introducing izakaya into South America and Africa.

More recently, these second-wave restaurants are still around, but as urban restaurant-goers have become familiar with the concept of the izakaya, there is no longer any need to educate them as before. This has been partly because of the internet, but also because of the popularity of Japanese food variety shows such as Iron Chef (which was then localized by several other countries) and dramas like Shinya Shokudo (“Midnight Diner”). This has led to the evolution of the next wave, in which restauranteurs embrace the izakaya style of casual atmosphere with lots of beer, sake and other (usually Japanese) alcohol, but then take the cuisine in their own directions, the result of which a typical Tokyo salaryman would be hard-pressed to recognize.

Now in its third wave, izakaya has become a fine dining fashion concept. Because Tokyo is still so popular, they still use a Japanese style and décor, but since Japan is now so familiar, they no longer play up the exoticism. Japanese alcohol is one of their main features, and many New York izakaya are trying to build enthusiasm for sake, stocking a huge range of varieties and appealing to would-be connoisseurs by offering tastings and hiring knowledgeable sake sommeliers to help them learn more about the drink.

One interesting phenomenon that has emerged is something that Professor Ferrer describes as the “trans-urbanization” of the izakaya. That is, rather than just spreading outward from its source in Japan, izakaya ideas are now flowing between cities, having become a global concept. As an example, he gives Zenkichi in Berlin, which markets itself as a “Brooklyn izakaya”: a Japanese restaurant featuring Japanese cuisine and sake, but in a Brooklyn style, combining the popularity of Tokyo with the cool of the New York borough.

Looking at how the izakaya concept has become a global phenomenon, one might wonder if there will be a ‘fourth wave’ in which these global izakaya return home to Japan. While it is unlikely that the simple, low-cost eateries found throughout Japan will ever be displaced, it’s conceivable that crowds of adventurous diners may one day be lining up outside “Brooklyn-style” or “Berlin-style” izakaya in downtown Tokyo and Osaka. 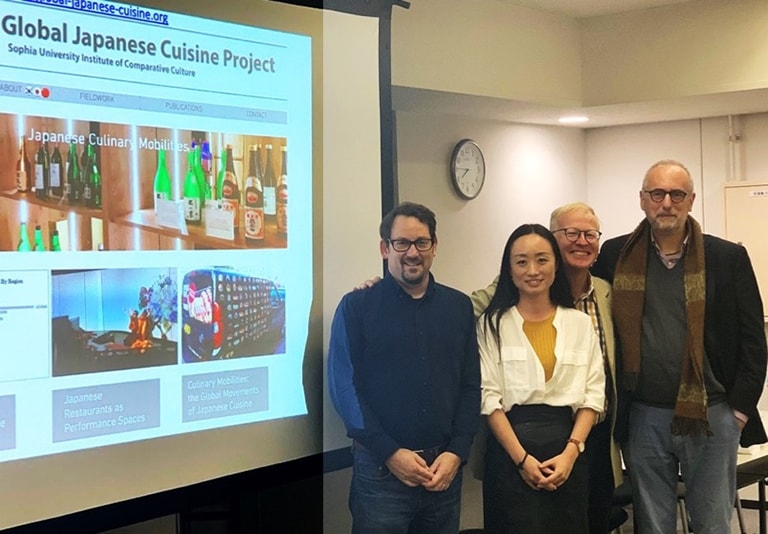