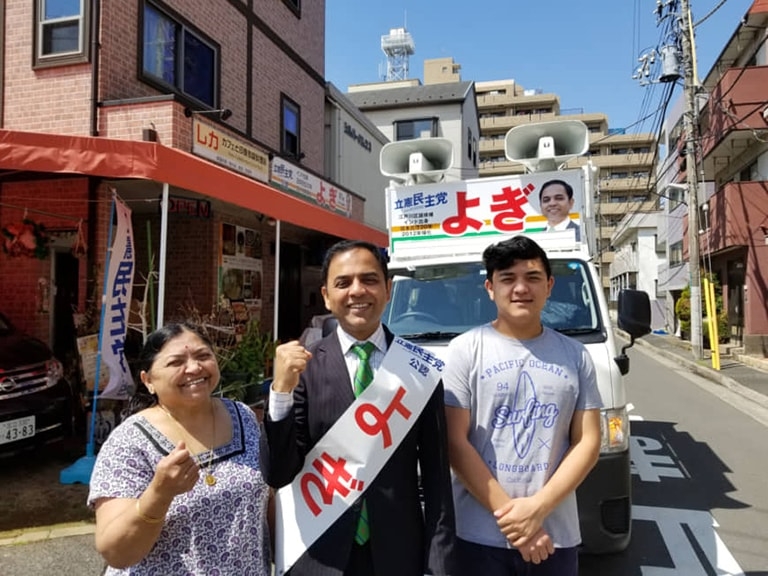 Everything changed for Yogendra Puranik the day he attended a committee meeting in 2016 discussing a plan to create a version of Singapore’s Little India district in Nishikasai, an area of Tokyo’s Edogawa Ward that boasts a sizeable Indian population.

As he tells it, Puranik was the “only Indian from a professional background” taking part, the rest of the Indian representation being made up of restaurant owners, a reflection of the “old diaspora.”

“They should’ve been involving the professionals as well,” Puranik, now 42, tells The Japan Times referring to the new wave of migrants that consist of Indians working in IT and at multinational companies. “These are the people who are struggling, and their experiences and suggestions matter.”

The plan under discussion was for an Indian street with 50 or 60 shops — restaurants, groceries, clothing stores and so on — along with a Hindu temple and a hospital staffed with Indian doctors.

Puranik didn’t think the plan was financially viable, however. There were already so many Indian restaurants in the area barely scraping by, and the only Hindu temple in Edogawa Ward — where around 13 percent of Japan’s Indian community is concentrated — was still raising funds to get itself out of debt. It wasn’t just the money, either. There was also the question of which god the new temple would be devoted to, and that, he pointed out, was sure to be a divisive issue.

As for hospitals, Puranik thought it would be better to focus resources on equipping already-existing hospitals and clinics with doctors who could speak English, which would benefit both the Indian community as well as other non-Japanese living in the area. Besides, bringing in Indian doctors would require a change in the laws that tightly regulate the sectors in which foreigners can work.

He had plenty of other ideas, too. “My suggestion was to offer Japanese language classes, training as to how one can adapt to living in Japan, helping Indian women find jobs, education for their children and so on — the things that would benefit the foreign community on the whole,” Puranik explains.

His enthusiasm was met with resistance, however. “My suggestions to the city councilor turned into an argumentative debate,” which spiraled out of control to the point that the councilor threatened to throw Puranik out of Nishikasai. If there was ever a life-changing moment for him, this was it.

“That’s when the whole thought process started for me for getting into politics,” he says. “I wanted to join the other side of the table so I could take the opinion of the foreign community to the city administration.”

Three years later and “Yogi,” as he is popularly known, is a councilor himself — the first person of Indian origin to be elected to office in Japan. He’s also a naturalized Japanese citizen, a legal necessity for any foreign resident hoping to get into politics at any level, as well as a single father. The experience of bringing up his half-Chinese son in a country that emphasizes a narrative of a cultural homogeneity helped nudge him toward using politics to effect societal change, but the fiery exchange at that meeting in 2016 lit the fuse.

Puranik first visited Japan as a college student for one month in 1997, and then for a year in 1999. In March 2001, he came to Tokyo to work in the IT sector. He married his Chinese girlfriend in the summer of that year, but they separated a week after their son, Chinmay, was born in 2002 and divorced five years later. Puranik raised his son as a single parent with the support of his mother, Rekha, who runs an Indian restaurant in Kasai.

For the sake of Chinmay’s cultural education, and in need of support from the Indian community as a single dad, Puranik moved to Nishikasai in 2005. He became involved with both the Indian and Japanese communities by volunteering and taking part in cultural festivals. It was through these experiences that he ended up as a liaison of sorts between his Indian and Japanese neighbors, many of whom lived side-by-side in Nishikasai’s semi-public housing blocks, also known as UR (Urban Renaissance) housing.

“I realized that the Indians living in those apartments were not aware of garbage-disposal rules or many other rules in the UR housing as they were all written in Japanese,” he says. “I explained that to the Japanese side, who often complained about (the Indians) to me. So, I helped in making documents in English so that the non-Japanese speakers could be aware of the rules and follow them.”

Eventually, Puranik became the secretary of the resident committee, and later its vice-chairman. He began taking part in more intercultural activities with the aim of bringing the Indian and Japanese communities closer together.

When the Great East Japan Earthquake rocked Tokyo and devastated northern Japan in 2011, Puranik and other volunteers helped their neighbors restart their gas and electricity, which automatically switches off as a safety precaution during a quake.

“We also started a helpline for Indian people and I shared my personal phone number,” he recalls. “Just within the first couple of days, I answered around 200 calls and queries about radiation, food and water safety. This was the time people actually accepted me as a social volunteer for the community even more than before.”

After the March 2011 quake, Puranik decided to permanently settle in Japan and applied for citizenship. At the time, he was working for Mizuho Bank as vice-president of operations strategy. He became a Japanese citizen in 2012.

“There has not been a change in me because my nationality or passport has changed. I have very good connections with both Japanese and Indians. If I am watching a match and it is Japan against some other country, I would be always supporting Japan. If it is India versus some other country, I would always be supporting India. If it is Japan versus India … then there will be a split,” he says with a laugh. “I’ll just enjoy the game.”

“For me, both the countries are the same. But if you ask me where I would like to spend my old age, I think I will continue in Japan. I would choose to die in Japan because the years of my stay are getting longer here.”

Puranik’s son was among the first students to enter one of the new Indian schools in Tokyo, but Puranik became concerned over the lack of Japanese-language education and narrow range of extracurricular activities in the school, so he decided to move Chinmay to a typical Japanese school in fifth grade.

“His Japanese language skills were almost nil at that time, but he picked it up very fast,” Puranik says. “The good thing about the Japanese school was that not only did his language skills get better, which is important to make local friends, but it was a good environment and there were facilities for extracurricular activities like sports and music. Financially, it was good for me because the Japanese schools are free, and for Indian schools I was spending around ¥80,000 to ¥100,000 per month.”

Chinmay began playing the piano, drums and tennis, but while he was getting a lot out of after-school activities, he wasn’t enjoying the lessons themselves. Though his language skills were improving, he struggled to reach the standard required to be able to study subjects such as history and geography in Japanese.

As a result, Chinmay ended up being bullied by one of his teachers. She kept him out of sports classes, justifying his exclusion on the grounds that his Japanese was not polite enough. She told him he should first learn to speak Japanese properly, and only then could he attend.

“He was depressed,” Puranik explains. “Initially the education committee didn’t listen to me, but I warned them that I’d go to the court and it resulted in an investigation and it was proven that the teacher was bullying my son. The teacher finally wrote an apology letter and accepted her mistake.”

This incident led Puranik to send his son to a boarding school in the U.K., where he entered ninth grade on a scholarship. He says his son is now enjoying school.

Puranik says his involvement with the community and his son’s situation at school gave him a better understanding of the issues people in his community were facing every day. These experiences, and the rift with the city councilor, inspired him to give politics a shot, and on April 21, 2019, he secured 6,477 votes in the Edogawa Ward municipal elections, earning him a seat in the assembly.

“I want to go out in the field and ask people their problems,” he says. “I didn’t see that happening and that is the change I want to make. I want to make a schedule for open house meetings in the ward where people can just come and talk about their problems.”

In January of 2019, Puranik and other members of the Indian community established the All Japan Association of Indians. It is a collaborative effort to bring together people from different states of India — each of which often has its own expat group — into one umbrella association. It is one of the first Indian associations in Japan to offer support not only to entrepreneurs and white-collar workers but also blue-collar employees of places such as factories and restaurants, helping out in areas such as education, health, day-to-day needs, neighbor- or family-related disputes and language. The association also aims to nominate a regional head in as many prefectures as possible.

Puranik has also given several talks to students, and some domestic conferences and meetings, as well as speaking at the Edogawa assembly. The subject matter he tackles runs the gamut from the India-Japan relationship and multicultural diversity to strengthening disaster prevention and evacuation measures, education reforms and eliminating bullying. He has also tackled various topics concerning non-Japanese people living in Japan, including the acceptance of technical trainees, employment issues and how to avoid falling victim to scams.

Puranik also runs the Edogawa India Culture Center, which hosts free classes on everything from yoga, languages, cooking, art and music to classical and contemporary dance, movies, culture and philosophy from the subcontinent. As you can see from the list, he isn’t short on things to do.

“My key slogan is that I am going to be the bridge between the Japanese and the foreigners,” Puranik explains. “When I say bridge, I want to have a definite schedule of some initiatives through which Japanese and non-Japanese people can actually come together. One thing is creating inter-cultural interaction between the migrants and the hosts. The second thing that I am focusing on is more of a structured education-orientation as to how non-Japanese can live better in Japan and how Japanese can feel about the non-Japanese.”

As Japan opens its doors cautiously to more foreign labor, Puranik realizes its people will have to open their minds to cultural difference, but he says the new arrivals also have responsibilities.

With other developed countries also beginning to face the same demographic problems as rapidly aging Japan, the nation is competing for global human resources with the rest of the world — including countries that have a history of accepting large numbers of immigrants. Ex-Nissan chief Carlos Ghosn’s revelations since his dramatic escape from Japan certainly haven’t done the country’s image as a destination for foreign professionals any favors.

If Japan doesn’t become more accepting of other cultures soon, Puranik worries that not only could this country find it difficult to attract top talent, but it could also lose its most global-minded citizens to the competition.

“I came to Japan as a first generation. Japan is going to experience a scarcity of people and I feel the government must make the effort to keep the second and third generations here,” Puranik says. “I am sure my son is going to be a brilliant human resource in future but the question is, will Japan be able to retain him or not?”