Basketball breaks down barriers on the courts at Tokyo's Yoyogi Park 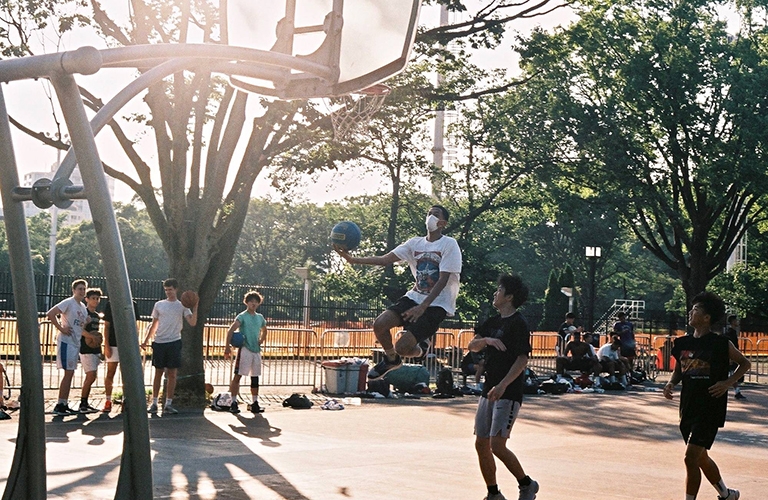 Catching air: Kisara Washington takes a shot during a game on the A Court in Tokyo’s Yoyogi Park. | DAN BUYANOVSKY

“I got next-next-next-next!” Jean-Patrick Ehouman yells over his shoulder, aiming his claim at a crowd of laughing, sweat-covered 20-somethings.

The 39-year-old Ehouman, who moved to Japan from Cote d’Ivoire six months ago, returns to his gym bag, puts on his sneakers and stretches. In 45 minutes, he’ll finally get his turn to play at the basketball court in Tokyo’s Yoyogi Park.

It’s a Thursday afternoon, the sun is out, and highly spirited games are unfolding in rapid succession, with upward of 40 players waiting in the wings for their chance to compete. Between games, players sit on the ground and rib each other about a previous matchup or react loudly to the lopsided plays happening in front of them.

One player, shirtless and wearing jean shorts, with a single blonde braid snaking down the back of his neck, smokes cigarettes while DJing over a maxed-out portable speaker. He cycles through a narrow playlist of Lil Uzi Vert, Future and Travis Scott, rappers who blend boasts with introspection over ballistic beats.

At one point, “Bad Bitch from Tokyo,” a new track by Pop Smoke, the recently deceased New York rapper, booms over the speakers, prompting the players to sing along in English.

During Tokyo’s state of emergency, barricades were placed over Yoyogi’s basketball rims, making it impossible to play. On days like this, players’ excitement about the reopening of what a lot of them say is Japan’s premiere basketball destination is palpable.

Located at the halfway point between Yoyogi-Hachiman’s upscale restaurants and Harajuku’s posh boutiques, the Yoyogi courts were built by Nike in 2005 and have become a haven for an alternative kind of socializing that has proven essential for many regulars.

“Japan has very few places to play real street basketball,” says Jiro Ikeda, a 43-year-old player who was born and raised in Japan. “Yoyogi has arguably the best competitions among them.” 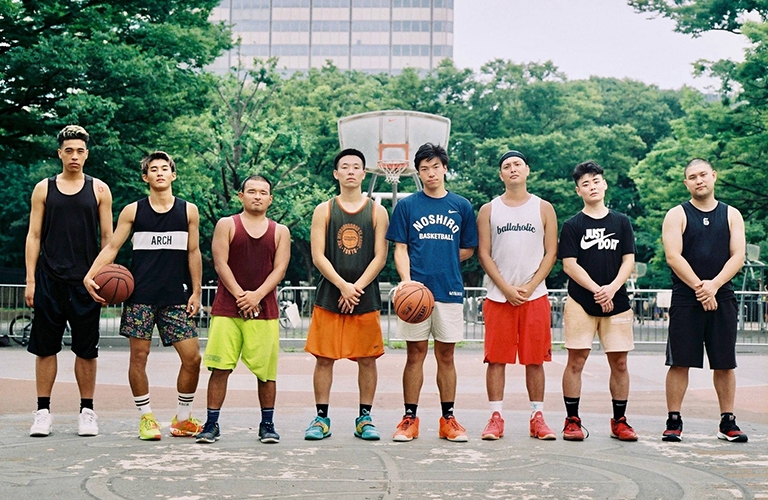 Basketball meritocracy: Those who play ball at the Yoyogi Park basketball courts must wait their turn to join the game. | DAN BUYANOVSKY

Street basketball, popular in cities around the world, is a style of the game that is defined by an aggressive, winner-stay-on mentality. There are no referees, no sign-up sheets, just a loose set of unspoken rules that dictate players call their own fouls and “call next” when they want to play.

“It’s like a game of social double-dutch,” says Patrick McDermott, a Filipino-American man who grew up in Okinawa and has been playing in Yoyogi since 2013.

McDermott calls the courts an “equalizer” across cultures — both for Japanese players who are not used to asserting themselves in public and for international players who feel pressured to speak Japanese beyond the borders of the park.

“There is no place like this in Japan, which breaks down social walls and social constructs,” McDermott adds, “because you not only get to know new people quickly but within minutes of meeting them, you’re playing alongside them.”

The courts attract a varied population of Japanese, Chinese, American and African players, who, beyond sharing a love for basketball, appreciate having a community that represents the sport’s global reach.

“I think the Yoyogi courts have the most diverse culture in Japan, as far as sports,” says Ikeda.

And somehow, the diversity of native tongues has yet to cause confusion.

“With sports, language is never a barrier,” says Ehouman. “With basketball, the main language everywhere in the world is English, because it comes from America. But even if you don’t speak English, if you don’t speak Japanese, it’s not a problem. Most of the time you don’t talk, you just run.”

But as open-minded as communication might be, the courts are, after all, a meritocracy.

“If you’re a good player, other players will make friends with you and respect you. I felt welcomed right away,” says Adeola Seun, a Nigerian player who spent most of the afternoon dunking over opponents. “If you’re not a good player, they’ll get you off the court. Everybody’s out here trying to win, and if you’re not playing to win, they’ll just kick you off the court.”

Beyond the laughs and camaraderie that run rampant at the courts, look close enough and you’ll see a subtext of dogged competitiveness. You might even catch a glimpse of a professional player, like the Utsunomiya Brex’s Kai Toews, who has chosen to take advantage of the B. League’s hiatus by putting in hours at the Yoyogi courts.

Toews is an acutely fast, masterfully skilled presence at a venue that is ostensibly for amateurs, but Luca Bettio, an Italian man who moved to Japan nine years ago after a brief stint as a professional basketball player in Italy, says that competition is welcomed, because it benefits all players.

“Once, there was a kind of famous university here in Japan, and they had a really good basketball team,” says Bettio. “They came to Yoyogi to practice during the summer. And they thought they were good. Then they came here and we made a team of the best people here, and they lost every game. Afterward, their coach got really angry and sent everybody back to the gym. They thought they were good, but not on the level of the guys here.”

For anyone who steps onto the court, the stakes are high. Those standards can lead to separatism, too. While Yoyogi is home to two side-by-side courts, they are delineated by an imaginary line that crosses race, level and style of play.

“The first time I came here, the older people were kind of racist,” says Kisara Washington, a half-Japanese, half-Black player who was born and raised in Japan. “They talked a lot of sh-t and played dirty. And when they saw Chinese players, they would talk sh-t until they left. Now, the Chinese people all play at the B Court. They don’t tend to play on the A Court.”

Over at the B Court, the play is passionate, lighthearted and only slightly less competitive. Where the A Court is mostly reserved for full-court, 5-on-5 games, the B Court is split into two halves, where a largely Chinese population plays half-court games of 3-on-3 or 4-on-4. Despite the separation, the players on the B Court don’t seem to mind.

“There are many Chinese players on this court, so I can easily talk to them and play,” says Chin Shii, a player who moved from China to Japan two years ago. “The level is 8 or 9 out of 10. It’s really good. I don’t play on the other court because I don’t like playing 5-on-5. Too much running.”

“It’s a beautiful place to play basketball,” adds Huang Yang-Gan, a Chinese man who found the courts on Google Maps.

The beauty of Yoyogi Park’s treeline can truly make the courts feel like an oasis, far away from the concerns of the world. Some players recall arriving to the courts at 8 a.m. on weekends and staying until nightfall. And the surrounding population’s ongoing fears about a growing number of COVID-19 cases?

“I’m not scared at all,” says Adeola Seun, catching a breather between games.

“I’m nervous, a little bit,” admits Washington, the only player on either court wearing a mask. “But I think I’ll keep coming back.”

As long as the sun shines and there are courts to play on, Yoyogi’s competitors will be in attendance in droves. But the courts’ existence is not a foregone conclusion. In 2018, plans were revealed for the proposed Scramble Stadium Shibuya project, which would see the renovation of Yoyogi Park and the construction of a brand new soccer stadium in place of the courts.

This news prompted Ikeda, a longtime Yoyogi regular, to create the Future of Yoyogi Basketball Court group, which meets regularly, has a somewhat active Facebook group of 77 members and hopes to raise awareness of “how important it is to have this court here not only for the basketball players but also for the community in Shibuya, and in Tokyo.”

As it stands, the Scramble Stadium Shibuya has more than 98,000 supporters on its website. Its next steps are unclear.

“I really can’t tell what will happen to the park and the court, especially now that no one knows if the Olympics will be held next year,” says Ikeda. “But if the players keep the community tight and keep the place clean and safe, I think they’ll be OK. I hope so.”

As the sun sets over Tokyo on a Saturday evening and the city’s residents head to restaurants and bars, a straggler group of players kicks off an umpteenth game of 21, a half-court street ball game driven by rebounds and quick shots.

The semi-serious game unfolds through laughs and screams, with some now-tired players watching on from the sidelines, laughing along. Others throw up shots on the opposite rim. Some simply sit idly by and check their phones. They seem to be in no rush to leave.

“There used to be a basketball court in Shibuya, sponsored by Jordan, but they closed it,” says Bettio, the Italian former pro. “There was one in Shinjuku, and they closed that too. It’s just difficult to find a place like this where you can play a lot, talk to people and make friends. Everyone’s noisy, we play music. It’s a good place to come and get outside of the normal Japanese life.”