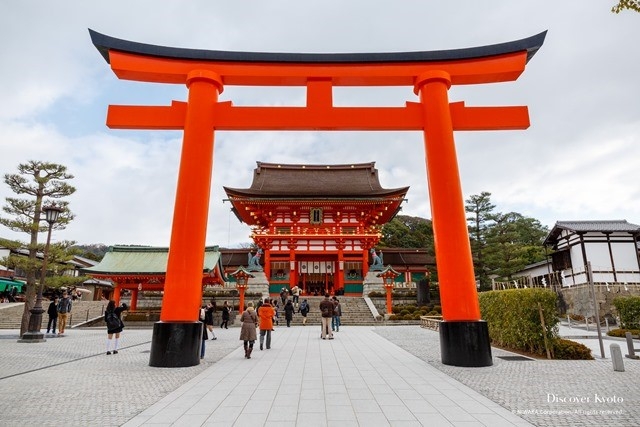 Kyoto, famous for being Japan's old capital, is also famous for being known as town of temples. Through Government of Japan's Ministry of Foreign Affairs, I, as a representative of Divya Bhaskar, got an opportunity to travel in Japan for 9 days, to see and to know the country. But in this travel, the place that attracted me the most was Kyoto. And in Kyoto, the Inari Shrine in Fushimi area is just unique. Inari deity, as such is known as the Rice Deity – the staple food of Japan, but the industrialist and businessmen of Japan also worship Inari deity as the deity of business. For the Japanese, this deity is the one who fulfils their vows and wishes. Since 1871, this shrine, among the Government-supported shrines by the Emperor of Japan, is holding the first place.
The Japanese have such a strong faith in Inari Deity, that in this small country, there are 32,000 shrines spread under the Inari Shrine across Japan so that people do not have to come all the way to Kyoto.
The Inari Shrine is located at the base of Inari Mountain in the Fushimi region. The shrine is spread over 4 Km area. One cannot miss the more than 10,000 toriis at the shrine. The toriis are the traditional Japanese gates or doors made from wood, are in bright colours of orange or red. These toriis are made by corporate companies of Japan, small and medium entrepreneurs and ordinary people, the reason being that when asking for a wish to be fulfilled or to thank when a wish is granted, the worshippers make these toriis at the shrine as per their capacity. As one walks through this long line of thousands of toriis at the Inari Shrine, it reflects the strong faith of the Japanese in their rice-god!
The main messenger of Inari God is two foxes. One can see the statues of the two foxes from the gate of the shrine to the shrine inside. There is a belief among the Japanese that these two foxes are the carriers of the message to the Inari God. In the mouth and paws of these foxes, one finds a dry straw or a jewel. In the courtyard of the shrine, one may find cards, key-chains pictures of these messengers to the God. Additionally, one also finds hand-made masks depicting the face of a fox, which is very faithfully bought by the worshippers.
Besides, there is yet another place in Inari Shrine where one keeps a vow by hanging a wooden tablet. The Japanese write their wish on the back of these tablets and draw an image of the fox on the front side of the tablet and then hang it at a pre-decided place.
After these, comes the place where you reach after walking through the line of toriis. This place is called Omokaru Ishi and one can find two special rocks here. Omokaru Ishi means heavy and light stones. The belief of these stones is that whether the believers can fulfil their dreams or not? For this, the believer first stands before the stone and thinks of the dream in his mind. After that he has to guess the weight of the stone and then try to lift the stone. If the stone is lighter than guessed, the wish will be fulfilled very fast and if the stone is heavier than guessed, then the fulfilment will take a long time.
One has to buy a ticket to enter the temple. The ticket is also considered to be very holy. The Japanese also believe that if they keep this ticket after visiting the temple, their future can take a turn for the better.
After visiting the Inari Shrine, I understood that a modern country which is ahead in scientific research, also strongly believes in traditional values. If you want to experience this, you must visit Inari Shrine.