Before this last trip, I had been to Japan twice and visited Tokyo and Kyoto. During both trips I was filled with curiosity, excitement, and a desire to know more about Japan. On my most recent trip, I felt those same feelings – but at a much deeper level. This most recent trip reminded me of how American I am; at the same time it reawakened the parts of my being that are Japanese. To me, Tokyo, Iwakuni, and Hiroshima used to be places on a map. Now they are so much more.

The Ministry of Foreign Affairs, under the leadership of then Foreign Minister Taro Kono, created this program to bring four Japanese Americans to Japan to share the Japanese American story with high school and college students. I was honored to be nominated by Consul General Muto and to be selected as one of the four representatives. The other three individuals were Dr. Dennis Ogawa, a noted scholar from the University of Hawai`i; Shirley Higuchi, chair of the Heart Mountain Wyoming Foundation; and Anne Shimojima, professional storyteller from Chicago, Illinois. What we had in common was that we were all Japanese Americans who could tell parts of the Japanese American story.

The trip was a transformative experience. I had the good fortune to speak at the University of Tokyo, Kaisei Gakuen (an elite high school for boys), and Yamato Nishi High School ( a co-ed public high school). Along with these lectures, I spent a lunch period with a group of students at Yamato Nishi. I listened to their dreams of someday seeing America, possibly studying abroad, and, most interesting, their desires to demonstrate their individuality.

The students and I came from such different backgrounds. Being an ethnic minority in America, I grew up around people who did not look like me, had different customs in their homes, ate different foods, and had different family histories. This is not true for Japanese students in Japan. They are a part of a vast majority, surrounded by images and messages that reflect who they are, and they are immersed daily in a relatively homogeneous culture. I come from a culture that promotes individuality. These students are growing up in a culture that emphasizes uniformity.

Many of these students did not personally know any Japanese Americans. For some, it was difficult to imagine how someone like me – a person who looks nihonjin – could not be nihonjin and, in fact, identified as American. And, yet, we connected. During the presentations and lunch, we talked, we laughed, and at times we cried – and throughout it all we began to see each other’s worlds.

Along with the students, I had the opportunity to meet with Suzuki Keisuke, Arima Yutaka, and an old acquaintance, Minister of Defense Taro Kono. In our meetings, we discussed the changing geopolitical landscape which Japan is facing: the changing relationship with South Korea; the unpredictable threat of North Korea, the growing status of China, the declining number of Japanese students coming to study in America.

Through these discussions, I became convinced that Japan is America’s most important ally – not only in the Pacific, but in the world. No doubt, we have very trustworthy allies in Europe: the United Kingdom, Germany, France – but that’s the point, we have numerous allies in Europe. In the Pacific, Japan is our staunchest ally in a region of the world that may very well dominate the globe throughout the rest of the century. There is no doubt Japan and America enjoy a mutually beneficial relationship – a relationship which stabilizes the globe.

This trip touched me educationally and professionally. But, there was another area of growth – this trip helped me to understand my personal connection to Japan. The last two days were spent in Yamaguchi ken. I visited Suo Oshima, Iwakuni, Akiyoshi caves, and Hagi. I learned of Yoshida Shoin and his contribution to ushering in the Restoration period. I learned of the Chosu Five and how Ito Hirobumi became the first Prime Minister. I learned that Prime Minister Abe is from Yamaguchi prefecture and that Yamaguchi has produced the most prime ministers of any prefecture. My guide jokingly told me, “See Maki san, if your grandfather did not come to America, you could have been Prime Minister!” I am sure Prime Minister Abe is so grateful my grandfather came to America!

As I learned about the history of Yamaguchi, then called Chosu, I recognized how its history was intertwined with my family’s history. I learned how the first foreign minister recruited Japanese to go to Hawai`i, because Hawai`i needed farm labor and subsequently fishermen. Japan had just ended the Tokugawa period and was engaging with the world. My grandparents were a part of that engagement and migration.

All of this was intellectually stimulating, but the emotional highlight of the trip occurred at a lunch in Iwakuni. My guide told the waitress that I was visiting from America. The waitress recommended that I try their specialty, Iwakuni zushi. She claimed that it was only made in Iwakuni, so we ordered it.

A few moments later, the waitress placed the Iwakuni zushi in front of me. My heart stopped. My mother made this same type of dish. I had eaten it at countless meals she prepared. I had no idea that it was from Iwakuni. I immediately sent the photo to my family. Within minutes, my daughter texted back, “That’s what Grandma used to make!”

I carefully used my hashi to break off a piece and placed it in my mouth. The taste was the same. In that moment, Yamaguchi was no longer a place on the map – Yamaguchi became a place in my soul.

My very last day was spent at Hiroshima. I have difficulty putting into words the range of feelings I experienced –sadness, anger, fear. The profound devastation, the widespread suffering, the hellish elimination of life – it was overwhelming. And then an unanticipated feeling began to emerge – a feeling of hope. Hope that we as humans would learn. Hope that we as humans would commit ourselves to never let his happen again.

The histories of the United States and Japan became intertwined during the last century. The Japanese American experience is an embodiment of that relationship. We share values and a history – more important, we share a future. For that future to be bright, we will need to continue strengthen our relationship. As we go into that future, may we know each other not as places on a map, but rather as places in each other’s souls. 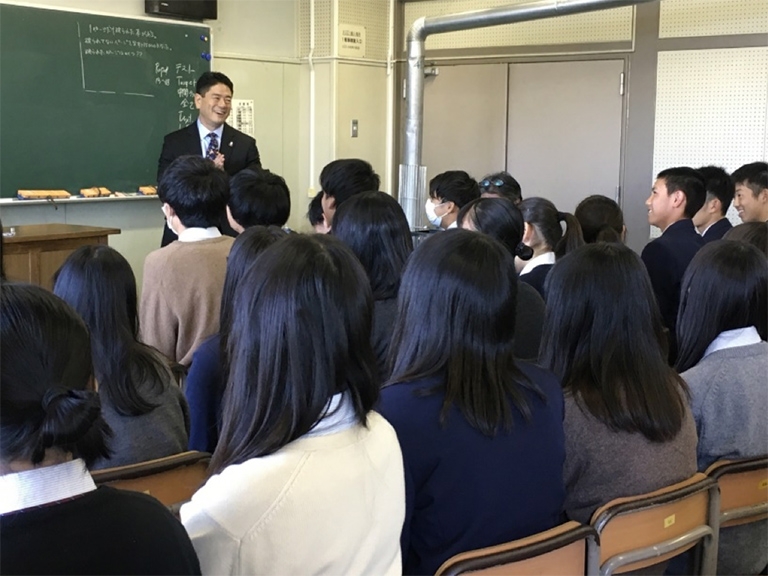