The Nachi no Himatsuri festival is held every year on July 14 at Nachi Taisha. A parade of blazing torches fifty centimeters in diameter and weighing up to 50 kilograms are borne up the stone stairs in the fierce summer heat.

In 2004 Sacred Sites and Pilgrimage Routes in the Kii Mountain Range became a listed World Heritage Site. For pilgrimage routes anywhere to be accorded World Heritage status is most unusual. Long ago this vast mountain range, which straddles the three prefectures of Nara, Wakayama and Mie, became the setting for religious mountain ascetic practices. Eventually three sacred sites with different origins and religious significance emerged, along with the pilgrimage routes that connected them. This area has long had an enormous influence on the development of Japanese religion and culture. 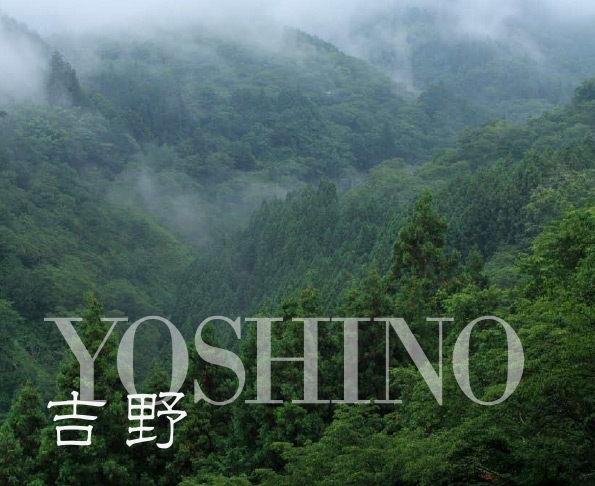 A route deep in the mountains for Shugendo practitioners on a pilgrimage of seventy five sacred sites and places of worship.

Since time immemorial Mount Yoshino has been the most famous place in Japan for cherry blossoms. From the northern tip of the Omine range, deep green forest unchanged since ancient times covers an eight kilometer ridge stretching north to south. In spring a gorgeously colored carpet of cherry blossoms begins blooming in the Shimo-senbon area near Yoshino Station, and gradually spreads upwards through the midway points of Nakasenbon, then Kami-senbon, before finally reaching Oku-senbon at the peak. It’s such a magnificent sight you can understand why daimyo warrior Toyotomi Hideyoshi would have taken 5,000 of his retainers there for a flowerviewing party. The area receives many visitors in fall as well, who wish to see the beautifully tinted autumn leaves. En no Gyoja, a famous sorcerer and founder of the ascetic mountain religious order Shugendo, arrived in the Yoshino mountains, with their peaks of over a thousand meters high, in the 8th century. According to tradition he undertook perilous ascetic rituals there in order to expiate sin and defilement, and is said to have attained Buddhahood in his lifetime through these practices. During this time he encountered a manifestation of Buddha in the form of a vision of Zao Gongen, and, the folklore says, carved a figure of Zao Gongen into a mountain cherry tree and began worshipping him. Eventually the cherry tree was deemed sacred, and pilgrims coming to the Yoshino mountains would plant cherry trees. That is why there are so many cherry trees in Yoshino.

The roughly 170 kilometer long trail that traverses the Omine mountains to connect Yoshino and Kumano is believed to have been opened up by Eno no Gyoja for ascetic practices. Known as the Omine Okugakemichi, it is the most rugged of the Kumano pilgrimage routes. Pilgrims stop at each of the 75 places of worship and sacred sites along the way as part of their ritual training. Even now, more than 1300 years later, the route is a legacy for many Shugendo practitioners — known variously as mountain priests, ascetic monks or yamabushi — who undergo harsh training deep in the rugged mountains. The mountains venerated as the dwelling place of the gods, the culture of Shugendo that continues to this day, and a Shinto cultural environment unchanged since ancient times; all these form the cultural landscape that was recognized by the World Heritage listing.
En no Gyoja is also believed to have founded Kimpusen-ji in the Yoshino mountains, a World Heritage listed temple where Zao Gongen is worshipped as the chief divinity. The Zaodo hall, where Zao Gongen is enshrined under the name Kongo Zao Gongen (Diamond Realm Zao), is an enormous wooden structure that is second in Japan only to the Great Buddha Hall at Todai-ji temple in Nara. This hall is a principal center of worship for Shugendo followers.
Other World Heritage listed structures in the Yoshino mountains are the Yoshino Mimakuri-jinja and Yoshimizujinja shrines. To make a journey along the pilgrimage route from Yoshino to Kumano is to give travelers a palpable sense of the passing ages. 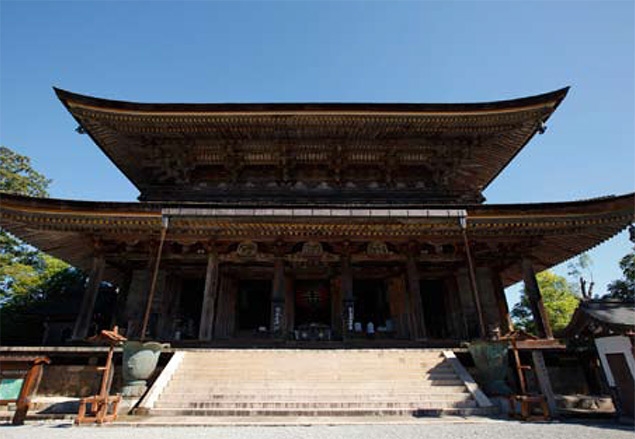 Zaodo hall is the main shrine at Kimpusen-ji, which is believed to have been founded by En no Gyoja. In 1874 the Meiji government banned Shugendo and the temple ceased to function as a Buddhist temple, becoming a Shinto shrine instead. Then in 1886 it was re-established as a Buddhist Tendai sect temple. In 1948 Kimpusen-ji became the head temple for the independently established Kimpusen Shugen Honshu Sect that was formed with the Zaodo hall (by then a designated national treasure) as its center, a state which continues to this day.
Post your comments