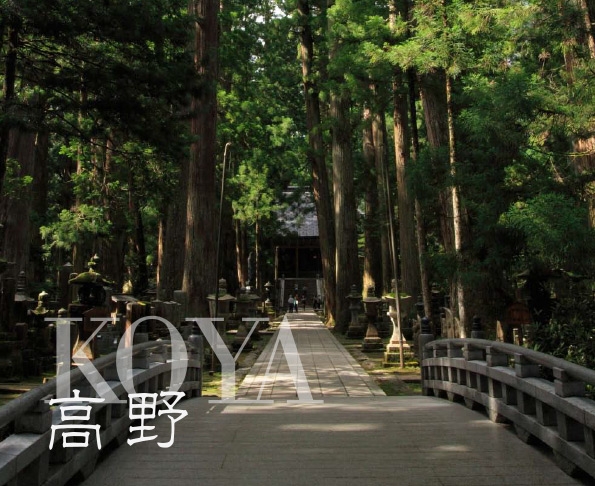 The path to Koyasan is lined with stone pillars and was opened up by Buddhist priest Kobo Daishi.

2016 will mark the 1200th year since the Buddhist monastic complex on Mount Koya was founded. Kobo Daishi (774-835) brought esoteric Shingon sect Buddhist teachings back from China, then the center of culture, in 816, and founded a religious community on the mountain as a place for monks to train.
Of the seven pilgrimage routes that lead to the 800 meter high Koyasan, the Koyasan Choishimichi route is listed as a World Heritage Site. Roughly 23 kilometers in length, it starts in the town of Kudoyama at the Jison-in temple, which was founded soon after Koyasan was opened up, and leads to the mountain top. It was the most frequented pilgrimage route up until the Edo Period.
Stone pillar signposts called choishi line the path every 109 meters, a measure of distance called a cho.
Inscribed on these pillars are the names of various Esoteric Buddhism buddhas and deities written in Sanskrit, the donor’s name, and the date they were erected. By some miracle all 216 signposts still survive in almost perfect condition. Follow these and you will not only enjoy the same mountain scenery past pilgrims saw, but also the same views of Kinokawa Plain. It’s because of these views that the path has become popular for sightseeing as well as a pilgrimage route. Four structures connected by the Koyasan Chosihimichi are also World Heritage listed.

Jison-in marks the starting point of the Koysan Choishimichi pilgrimage. Kobo Daishi’s elderly mother stayed here when she came from the Zentsuji temple in Kagawa prefecture to see the complex on Mount Koya that her son had founded, but since women were forbidden to enter Koyasan at the time, she was unable to go to him and instead lived at Jison-in. Legend has it that Kobo Daishi came down from the mountain nine times a month to see his mother, hence the town’s name of Kudoyama—literally, ‘nine times mountain’.
The nearby Niukanshobu-jinja was constructed as a guardian shrine when Kobo Daishi founded Jison-in. Built in the beautiful traditional architectural style of Kasuga-zukuri, it was here that he worshipped the Shinto deities of Niu Myojin and Koya Myojin.
About seven kilometers from the start of the trail is another shrine called Niutsuhime-jinja, with a striking vermilion-painted arched bridge and tower gate, and an impressive main hall. Niu Myojin, the guardian deity of Koyasan, and her son Kariba Myojin, who is said to have guided Kobo Daishi to the sacred place in the mountains, are worshipped at this shrine.
Stop for a breather at Yatate Teahouse before continuing on to Kongobuji temple, and then it’s only an hour or so until you reach Kobo Daishi’s Mausoleum. The journey from Jison-in takes about eight hours on foot. Carry a memo book like the pilgrims do to collect imprints of souvenir rubber stamps from sites along the way.