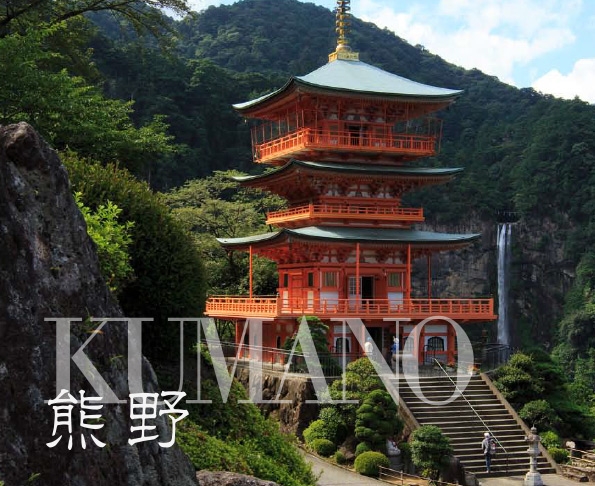 The red three-story pagoda of Nachisan Seiganto-ji stands out vividly against a backdrop of greenery and Nachi Falls, a waterfall with one of the longest straight drops in Japan.

Shinbutsu shugo is the fusion of ancient Japanese gods with the deities of imported Buddhism, vestiges of which can still be found today in Kumano Sanzan. Kumano Sanzan is the collective name for the three grand shrines of Kumano Hongu Taisha, Kumano Haytama Taisha, and Kumano Nachi Taisha. They are also the head shrines of the more than 3,000 Kumano shrines across Japan. The massive scale of these main shrines is astonishing when seen in person. They also have a very distinctive shape and layout, with very few of the carvings usually found at shrines. In fact, their architecture is not comparable to that of other shrines.
Under the influence of Shinbutsu shugo during the Heian Period (794-1185), Kumano Sanzan became an object of worship known as Kumano Sansho Gongen, meaning the three deities of Kumano. With the emergence of the concept of Gongen, the belief that Japanese gods were manifestations of Buddhist deities, it came to be believed that the three gods enshrined in the Kumano Sanzan shrines, Hongu, Shingu and Nachi, are also Amida Nyorai, Yakushi Nyorai and Senju Kannon, respectively. As a result, Kumano was deemed to be a “Pure Land,” as in the teachings of Pure Land Buddhism, and it became popular for retired Emperors to visit there. The retired Emperor Go-Shirakawa made thirty four visits, and the retired Emperor Go-Toba twenty eight. We know this because records of their visits are inscribed on stone monuments in the grounds of Kumano Hayatama Taisha.
The fact that in those days it would have taken two to three months to journey there from Kyoto tells us what a massive undertaking each visit would have been. The sight of these former Emperors taking a huge retinue with them on a pilgrimage to Kumano must have been a memorable sight for the common people, and would have helped to propagate the idea of pilgrimages.

All three grand shrines are World Heritage listed, along with the Seiganto-ji and Fudarakusan-ji temples, which developed close connections with Nachi Taisha in the course of Shinbutsu shugo.
The Kumano Sankeimichi Nakahechi pilgrimage route from Kyoto to Kumano Sanzan is 88.8 kilometers long. In addition to this there are three other routes; the 43.7 kilometer Kohechi route connecting Mount Koya with Kumano Sanzan, the ten kilometer Ohechi route that passes along the Kii Peninsula west coast to connect with Kumano Sanzan, and the 54.2 kilometer Iseji route from the Ise Jingu grand shrine to Kumano Sanzan. All of these routes are World Heritage listed.
The Iseji route is a particularly popular one amongst the Kumano Sankeimichi pilgrimage routes. Because it was also used by daimyo travelling to and from their obligatory periods of residence in Edo (now Tokyo), the trail was paved with stone and made wide enough for sedan chairs to be transported. A great many laborers would have worked on it carefully during the Edo Period (1600- 1868). Stones cut into varying sizes are laid out like a puzzle, which not only makes them easy to walk over but also beautiful to look at. And the breathtaking view from the Magose Pass en route erases all memory of tiredness from long hours of walking. Along the Kumano pilgrimage routes you will find both the footsteps of the past and timeless scenery.