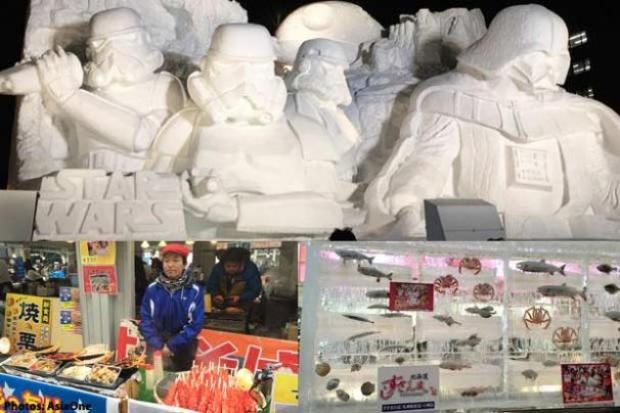 The force was strong in Hokkaido this February, as Darth Vader and his stormtroopers took centre stage at the 66th Sapporo Snow Festival. The enormous sculpture which emerged as a clear favourite at the festival also featured the Death Star.

It took 2,000 men from the Japanese Self-Defence Force an entire month to complete this towering 15-metre high snow sculpture.

An effort well spent, as visitors like Pat Srirassa, 32, from Thailand declared it as one of his favourites. 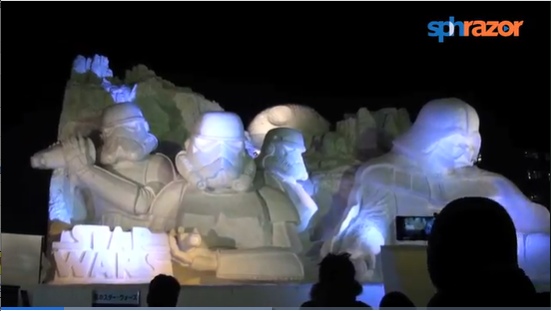 Another first-time visitor who loved what he saw was 60-year-old Mike Garrett, a bee farmer from the US. He had always wanted to check out the snow sculptures he saw on TV when he was a kid.

Mr Garrett, who was in Japan with his family, added that he would have loved to see them being constructed.

Other super snow sculptures included 'The Middle Gate and Hall of Kasuga Taisha Shrine', 'Alice's Adventures in Snowland' and the historic Manila Cathedral.

Besides the larger sculptures, there were smaller ones made by the citizens of Sapporo themselves.

The displays were not just static pieces - the sculptures also doubled up as stages for entertaining performances.

At night, it was a different scene as light illuminated the sculptures for an eye-catching effect. The Star Wars snow sculpture was one of those which wowed the crowd with an energetic light show.

With a growing number of visitors from Japan and abroad being attracted to the festival each year, the annual 7-day Sapporo Snow Festival is one of Japan's most popular winter events.

Top snowboarders and freestyle skiers wowed the crowds with their 'air' time.

The kids also had a snowball of a time with kiddy slides made of snow; this had them beaming from ear to ear.

And what's a festival without food?

The Hokkaido Food Park and International Exchange Food Corner on the festival grounds served up a variety of local and international cuisines.

More than enough to keep your belly warm and filled in the cold weather.

So for those planning a winter holiday, this is one festival to consider for some fun in the snow.

The writer's trip was made possible by the Ministry of Foreign Affairs of Japan.
Originally published on AsiaOne Travel on Mar. 10th, 2015