By Yuko Iida
August 23, 2015
Share
Tweet
Bon-Odori dancing is a seasonal staple of summer throughout the Japanese archipelago, and among the numerous Bon-Odori festivals held around the country, the Owara Kaze-no-Bon stands out as an unmissable once-in-a-lifetime event for everyone. 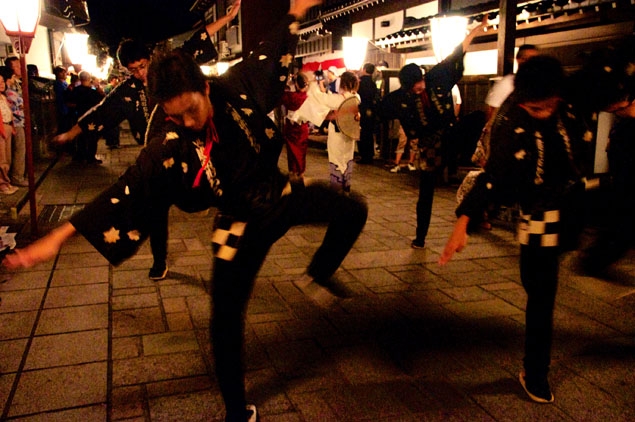 
In summer’s dying three days, hibiscus flowers spread their blowzy petals, big-hearted as love itself blooming. The men and women of Yatsuo dance through the packed streets of their neighborhoods in a beautiful Bon-Odori dance that is the epitome of grace, and a breath of cool refinement for the spellbound crowd.

Every year the streets of Etchu-Yatsuo begin to stir around August 20 as the strains of the kokyu fiddle can be heard from behind lattice doors, wind chimes chiming in at every pause.
Amid such serene awakenings the fever grows, rippling outward, eventually swelling into a raging torrent.
The Kaze-no-Bon festival that is held here from 1 – 3 September attracts over 200,000 visitors from all over Japan to the streets of this small town. Under their gaze, the people of Yatsuo dance, and dance, and then dance some more, pouring their hearts and souls into the performance. Their dancing is passionate yet elegant, even refreshing.
Faces hidden by straw hats pulled down low, the women mesmerize onlookers with the suppleness of their fingers, and the napes of their necks. The men don short indigo coats with bright white rice ear motifs, and perform crisp movements with a beauty all of their own. As they dance, male and female forms entwine mutely, sometimes playfully, sometimes passionately.
One theory is that Kaze-no-Bon originated as a “wind-subduing” ritual. Under the lunar calendar, hassaku (August 1) is when the rice ears grow heavy with grain. This date, 210 days from the traditional first day of spring in early February (risshun, midway between the winter solstice and spring equinox) , is an inauspicious day for wind, and a ritual was performed in the hope that the ears would not blow over before harvest.
Obviously the ritual was the same as others across Japan, and in the festivals’ earliest years during the Genroku era (1688-1704), in Yatsuo as elsewhere it appears to have been a rather vulgar, noisy affair.
A transformation occurred in the Taisho and early Showa years, when a local doctor by the name of Junji Kawasaki invited top writers, artists and practitioners of Japanese Butoh dance to Yatsuo and encouraged them to mingle with like-minded local enthusiasts for matters artistic. As a result the dancing became more refined, and the foundations were laid for the separate men’s and women’s dances. Each of the 11 districts of Yatsuo has subsequently evolved its own original dances, from stage dancing to circle dances, as well as dances that mime agricultural work, as prayers for a good harvest.
In the evening, following a few gusts of wind and a sprinkling of rain, the dances recommenced on stage and street. Eventually, as the night wore on, spectators departed on the last train. As silence fell on the cobblestones, the Kaze-no-Bon began again in the dark streets, each dancer dancing to their own tune, continuing under the light of the moon, as if in some dreamlike state between sleep and waking, until the sky began to brighten in the east.

* Dancers from each of the 11 districts parade through their neighborhood and perform a circle dance and stage dance for only one night before the main event. During the main Kaze-no-Bon festival the crowds are huge, but these preliminary performances are more relaxed and accessible.
Post your comments