By Yuko Iida
August 23, 2015
Share
Tweet
The massive 420kg “yonshakudama” of Katakai, renowned as the world's largest fireworks, carry the hopes of local residents in a spectacular legacy of the Edo period. 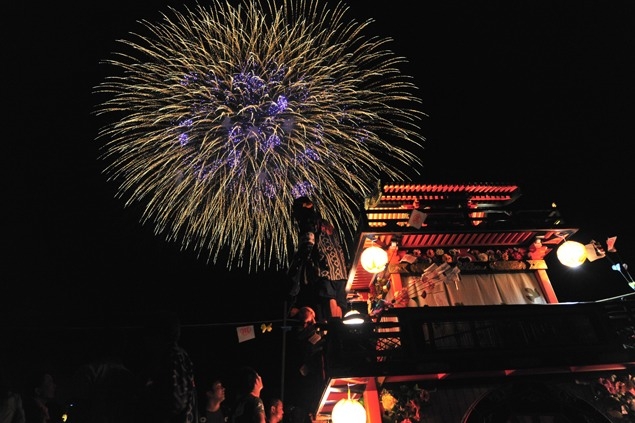 The First Place to Launch Giant Sanshakudama and Yonshakudama Fireworks!
Fireworks Explode Overhead in a Powerful Light and Sound Extravaganza


Old schoolmates return home, and quiet neighborhoods begin to buzz.
Don those matching blue jackets, tie on the headbands, and let the festival commence.
What beats winding through the streets with companions, singing work songs as you pull a float under 15,000 shimmering fireworks?

Niigata is rice country, and over the two days of September 9 and 10 every year, as the golden years bow in anticipation of harvest, crowds gather from across Japan for the Katakai Festival held in the Niigata town of Katakai, Ojiya City. An estimated 15,000 fireworks are launched over the two-day festival, in a display that pulls out all the stops with two, five, ten successively larger fireworks launched one after another, while spectacular “star mine” displays fill the whole of the night sky.

The fireworks of Katakai began in the Edo period as offerings to the Asahara Shrine, home to the local Shinto deity. Listen carefully to the announcements at each launch: many are personal dedications such as “A long healthy life to you Grandma, from your grandchildren” and “You always loved fireworks, I hope you're watching this from up there,” special requests made to the fireworks operator. During daytime on the 10th, the day after the nighttime festival, “condolence” fireworks are launched, presumably visible to those who have passed to the other side. Star mine and sanshaku-size shells blast colored smoke with a succession of bangs in the blue late summer sky. Once again, the echo of fireworks through the shrine grounds after spectators have left signals the end of summer.