ONE OF THE WORLD'S BEST SHORT BIKE RIDES IN JAPAN

One of the world's best short bike rides happens to be the Shimanami Kaido cycling route in Hiroshima Japan.
Spanning about 77 km from Onomichi to Imabari island, it is connected by a series of seven bridges which takes you across 6 smaller islands.
I was in Japan recently and had the opportunity to try out the route.
Most cyclists recommend starting from Onomichi city before taking a short ferry to Mukaishima and starting cycling from there.
So I landed in Hiroshima in the morning and got to my start point by noon.
After a quick lunch, it was off to the bike rental station, where I picked out a hybrid bike.
I consider myself a reasonably seasoned cyclist, having cycled in Taiwan, Thailand, Malaysia as well as part of Japan, so I was hoping to complete the 70-plus-kilometre route in 5.5 hours, or so I thought.
It took me a while to orientate myself after getting off the ferry. After figuring out the map, I soon realised that all I had to do was locate the blue line (which indicated the way to Imabari) on the road and follow that all the way.

Coming from a tropical country such as Singapore, I wasn't used to cycling in a cold 7-degree weather. So I put on a thick windbreaker on top of my cycling jersey, had sweat pants over my long cycling tights, together with a head scarf and mask to keep my head warm.
The bright sun and clear skies also made the journey a lot more bearable.
There were a total of seven bridges to cross, and I made each of them my check points.
Innoshima Bridge was first up, and it seemed to take me a while to reach it, maybe it was because I was stopping a bit too often to take photos.
But I soon had the bridge in sight and that got me all excited.
The path for bicycles went below the bridge, and there was room for pedestrians and motorcycles too.
The route to each bridge has dedicated bike paths, keeping cyclists separated from motor vehicles.
As I crossed bridge after bridge, it became apparent to me that the route was rather smooth, except the entrances to each bridge, where you will have to ascend a hill to reach it. Some of these ascents gave me a pretty good workout.
A few of the bridge crossing had me cycling in the open, exposing me to strong headwinds and beautiful scenery. 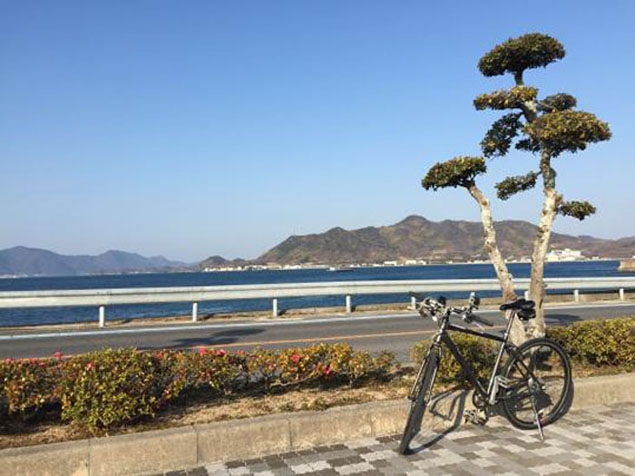 It was about half way through the route, around the 35km mark that I began to feel a slight cramp in my right thigh - not sure if it was the cold or if I wasn't as fit as I thought I was. Time wasn't on my side though, as daylight soon began to fade.
Determined to reach Imabari, I quickened my pace and pushed ahead.
Big mistake, as my legs started to cramp as I made my ascent on Takara Bridge.
So just before I entered the cyclist pathway, my legs seized up, and the pain was excruciating.
I had to take a time out, getting off and just sit down by the road side to stretch.
I'm not sure how long I rested, but when I felt I had recovered enough, I pushed on and got across the Omishima bridge - linking Omishima and Hakatajima.
As I got off the bridge, I saw a signboard indicating that next bridge was just 11.4 km away, usually an easy bike ride for me but I decided to call it quits as my leg cramps had gotten worse.
Plus, as the sun had set and it got darker by the minute, I deemed it too dangerous to venture ahead.
Thankfully, I managed to find a roadside restaurant, where the owners kindly called for help.
It wasn't too long before a taxi showed up, and that meant that my cycling trip had come to an end, but I sure was relieved.
As I sat in the taxi and gazed out, I'm glad I made the call to stop, as the road ahead was certainly too dark for me to continue.
I was cold and exhausted by the time I reached the hotel at Imabari, so I was glad to be given an onsen voucher that would certainly aid in my recovery.
I only managed to complete 55km of the Shimanami Kaido cycling route. There are cyclists who make a midway stop and then complete the route the following day, but as I only had 1 day in Hiroshima that wasn't an option for me.
So it looks like I'll have to come back to complete the remaining 20-plus kilometres, hopefully I'll have a bunch of cyclists with me then.

The writer's trip was made possible by the Ministry of Foreign Affairs of Japan.
Read More
Post your comments