Beyond the vermillion gates 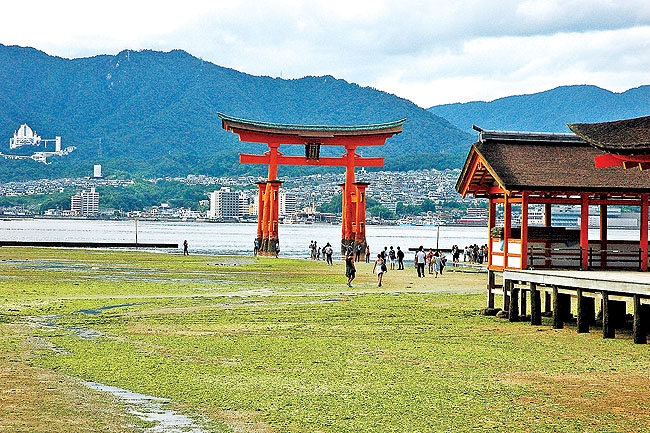 Tourists walk around the bank near the O-Torii. The vermillion colour of the O-Torii and shrine is consid-ered to keep evil spirits away

ITSUKUSHIMA or more popularly known as Miyajima, is an island in the Inland Sea of Japan.

The island is located northwest off the Hiroshima Bay and takes about 10 minutes to access from the Miyajimaguchi Ferry Terminal on the mainland.

The island is famous for its shrine, Itsukushima Shrine, which was declared as a UNESCO World Heritage Site in December 1996.

The shrine was first built in the latter half of the sixth century and has been remodelled to its present structure by a military leader in 1168 named Taira-no-Kiyomori.

The shrine, which stands in the sea, is known for its grand and unique construction following the artistic beauty of the Shinden style of architecture.

About 200 metres in front of the main shrine and standing in the sea is a vermillion coloured O-Torii (Grand Gate) which is the most noted symbol of Miyajima Island.

The O-Torii (Grand Gate) stands about 16.6 metres and weighs about 60 tonnes.

The main pillars of the gate are made from naturally grown camphor trees which are roughly 500 to 600 years old, is resistant to rotting and is protected from insect invasions.

The sleeve pillars are made of naturally grown cedar.

The O-Torii has been rebuilt several times in history and the present one is its eighth construction, built in 1875.

The O-Torii is believed to be a boundary between the spirit realm and the human realm and the island a place where deities, nature and humans live together in harmony.

The island is considered a holy site and women living on the island who are about to give birth would travel inland to deliver their babies, while the sickly who are near death are also transferred inland because blood and death are two impurities which are not allowed on the island.

It is a rural community where the islanders work hard to preserve the natural beauty of the island and live respectfully side-by-side with nature.

This is evident from the freely roaming deer found on the island.

The deer were once seen as messengers of the deities, therefore the islanders have left them to roam and wander the island.

Despite being wild, the deer seem tame as they would quietly watch tourists come up to them, pet them and take photos with them.

(left)Tourists cleansing themselves before entering the Itsukushima Shrine. People were required to wash their hands and face before entering (right)The ‘Goju-no-to’, a five-storey pagoda built originally in 1407 and was later restored in 1533. The pagoda is located next to Senjokaku (Toyokuni Shrine), a shrine dedicated to the Sengoku Era warlord Toyotomi Hideyoshi and his loyal aid Kato Kiyomasa

Tourists however are reminded that these deer are wild and that they should keep an eye on their belongings, especially those made from cloth or paper as the deer might actually eat them.

In fact one of the sights fellow journalists and I got to see during our trip there was that of a deer taking ice cream from an elderly tourist.

The deer gathered around him and one of them nudged his arm holding the ice cream, causing it to fall to the ground and the other deer get to enjoy a cooling treat on a hot summer day.

During the time our journalist group paid Miyajima a visit, the island was abuzz with hundreds of tourists.

The ferry to and from Miyajima were packed near full with people and the roads on the island were filled with tourists taking in the sights and sounds of the island.

The Itsukushima Shrine and O-Torii aren’t the only attractions on the island though, there are plenty of other shrines, temples and even parks on the island as well.

There is even an aquarium on the island and a municipal museum of the island’s history and folklore.

It would take a minimum of three hours to explore and enjoy the attractions on the island on foot.

Sadly, we didn’t have that much time but we made do with the hour we had and explored as much of the attractions as possible.

Exploring the island takes time, but it is time well spent as one gets to see historical buildings surrounded by green nature and experience an ambience which reflects the islanders’ respect for nature.

(left)Tourists preparing to do another cleansing ritual. This was optional and those who were curious were wel-comed to try (right)One of the many houses of the islanders that is situated along the roads behind the Itsukushima Shrine. Did you spot the grazing deer? 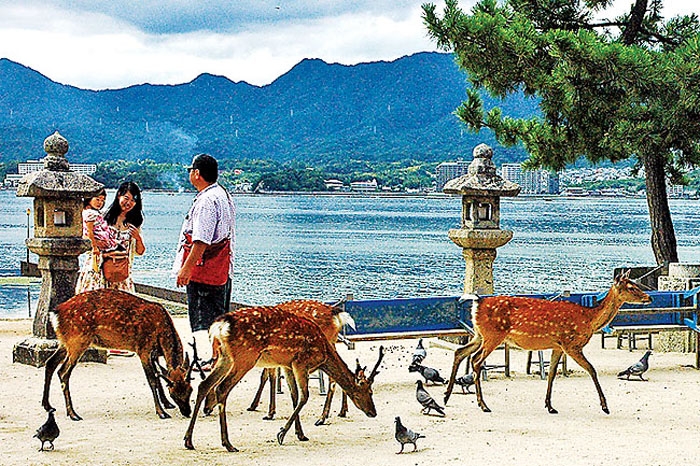 Wild deer can be seen roaming around the island freely. – PHOTOS: KHAIRUNIZA