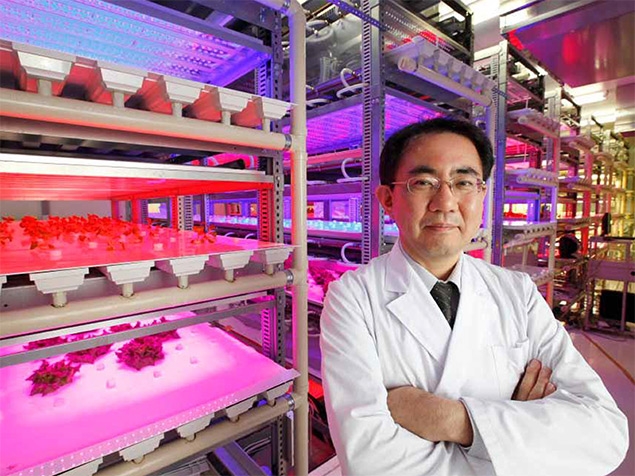 Plants do not need all of the wavelengths in sunlight to grow.
In fact, they only absorb certain essential wavelengths. Since lightemitting diodes (LEDs) can emit light at specific sunlight wavelengths, one would think that LEDs could be used to cultivate food.
Tamagawa University’s Dr. Hiroyuki Watanabe began his research with this idea.
Everyone is astonished that he can not only optimize vegetable cultivation, but also control the vegetables’ flavor, texture and nutritional value. JQR visited the research facilities to see the Plant Factory in its final stages of preparation for commercialization.

A clean room was installed in the Future SciTech Lab, which was built two years ago on the lush, expansive campus of Tamagawa University.
The students are devoted to tending the vegetables here every day. The thriving plants stand in methodical rows under the dazzling light emitted by red, blue and purple LEDs.
“LEDs were quite expensive until a few decades ago. When comparing the quantity of light produced to the cost, it was a hundred or even a thousand times more expensive than fluorescent lighting. The cost made it impossible to justify the use of LEDs as a light source for plants.”
Solving the cost issue was essential if vegetables were to be grown using LEDs. Watanabe, who began his research in 1991, explains that the introduction of blue LEDs in 1994 and the reduction in the cost of LEDs were boons to his research.
“Blue light is vital for plants. I bought some as soon as they were released on the market. They were expensive at 3,000 yen each,” he says, laughing.
Lengthening the life of an LED was vital to lowering costs. The LED chip is an element approximately the size of a 0.3 mm poppy seed. 70 percent of the electricity it uses is released as heat, which burns out the chip itself. Constantly cooling the LED would extend its lifespan, so Watanabe devised a direct water cooling system.

“The LED chip is held by resin, which is a heat insulator, so the heat is almost entirely contained. I then thought of directly welding the chip to the aluminum board. The LED lasted longer when we ran water below the aluminum board to cool the chip, keeping it powered it at almost 20ºC. It was durable, and a strong electrical current could be produced. This is the core technology for our LED cultivation system.”
With these innovations the team could produce the ideal LED. They added this data to their accumulated cultivation knowledge and took on the challenge of applying it when the time was right. At this point, what products can they actually produce?
“As well as leafy vegetables, we can grow strawberries, tomatoes, potatoes, sweet potatoes, ginseng, rice, soy beans – anything, in fact. We’ve even produced rice and soy-bean crops, but from a cost perspective it was crazy,” he laughs. “Many people have hopes for strawberries. We can produce a slightly bitter lettuce and a sweet, soft-textured lettuce.”

“We can also grow vitamin-rich lettuce and lycopene-rich tomatoes.
It is easy to increase the vitamin A levels in lettuce tens of times over. Essentially, we can control the night and day ratios by using certain amounts of red LED light.”
Plants are grown in the laboratory under controlled conditions:
light wavelength, intensity, time, temperature, gas environment and other factors are all regulated.
Surprisingly, the most important of these is wind. The quality of the vegetables varies depending on the wind flow and the way it hits them.
“All of the growing environment conditions can be altered in the Plant Factory to match the desired result.
The only question is whether to spend the money to do it or not.”
The production of vegetables – our primary source of nourishment – is largely dependent on the weather. It also takes several months before the vegetables can be harvested. The state of the market can be predicted ten days in advance, so information on market distribution, sales, demand, and other factors can be accurately gathered. With this information, Watanabe explained that the Plant Factory can manage distribution for hard-to-get vegetables with high added value – and other vegetables – that can be produced when prices are low.
“The Plant Factory, which is now being commercialized in collaboration with Nishimatsu Construction, is automated from cultivation through to harvesting and can even pack the products. It is unnecessary for people to enter the cultivation space, because everything is monitored using cameras and sensors. The cultivation conditions and other factors are controlled using the computer in the control room.”
Watanabe hopes corporations will be interested in the Plant Factory concept once its feasibility and profitability is proven.

The world’s population is constantly growing, and we are sure to suffer from food shortages in the future.
When that time comes, a system that can produce a determined volume of vegetables daily, without being influenced by the weather, will be very attractive.
So, what is Watanabe’s ultimate goal?
“To establish this as a business. When we do, competitors will appear, and this field will attract investors and skilled individuals. What I mostly hope for is that students trained as technicians will be employed in this field, applying the skills they’ve acquired. The College of Agriculture is nurturing experts in food production, so it’s hard seeing them having to find work in companies unrelated to their specialty. It’s ridiculous to complain that our agriculture industry is not internationally competitive when we’re not properly utilizing the qualified people. Once these people start using their skills, the level of skill in the agriculture industry will rise.”
The vegetable factory, which is slated to start operations in the fall, has achieved lettuce production in 12 days. The goal is to produce 3,500 heads of lettuce daily in two years’ time.

An enormous amount of time is necessary to accumulate growth data under various conditions. More efficient gathering of data on high-quality vegetable production will reduce costs. Great expectations have been placed on functional vegetable production. For example, rice that generates the genes used in vaccinations against infectious diseases, such as cholera, can be produced, saving many lives. The cost of dispatching doctors to infected areas could be greatly reduced.
Vaccinations against influenza can also be included in food. Watanabe mentioned that soybeans have great potential 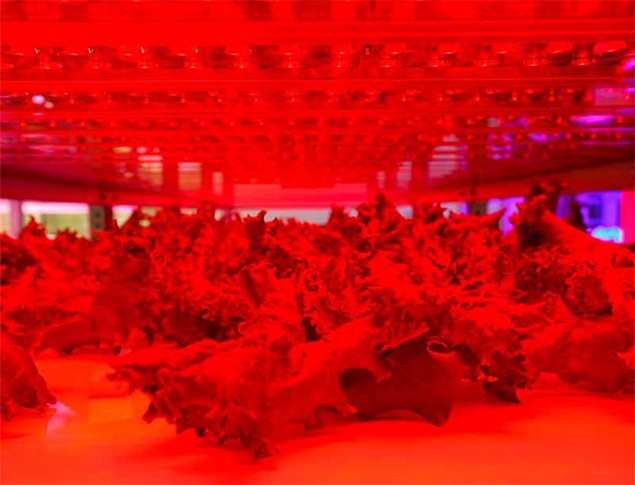 The lights in the laboratory cultivation racks can be changed from blue to green to red with the flick of a switch. The flavor of lettuces produced under the red and blue LEDs were distinctly d ifferent.