Ecopackaging Evolves for the Future 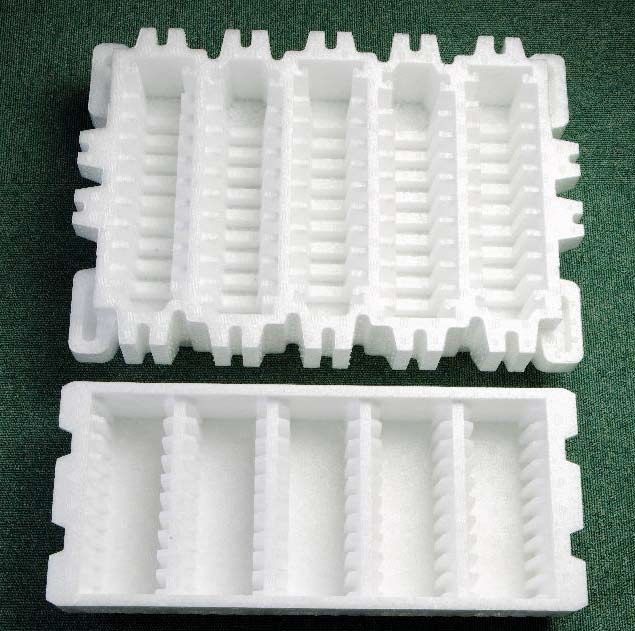 Kanepackage President, Yoshikazu Kanesaka. He paints a clear picture of the company’s future, and takes the lead in environmental business.

The packaging surface was a big factor in successfully lowering the impact value. The sides were molded into waves and partially cut away diagonally. This shaping disperses outside forces.

All at once the times are changing toward a more ecologically sustainable lifestyle. In the packaging industry the Kanepackage Group, whose headquarters are in the city of Iruma, Saitama prefecture, was amongst the first to pursue ecopackaging.
The company’s basic business is the provision of total packaging, from product packaging suggestions to design and manufacture. Usually the job of getting products packaged means having to deal with several companies, such as cardboard and cushioning makers. But Kanepackage’s strength is having unified all these specialist tasks into the one company, giving it the capacity to pay close attention to the finest detail in packaging production. Another point in the company’s favor is that it is able to greatly reduce CO2 emissions by making lighter and more compact packaging materials.

Packaging Called for by the Times

Cardboard is trimmed on the sample cutter according to the design. The ability to make trial products in-house is one of the company’s strengths.

Kanepackage has particular goals it aims for in the packaging it produces. These can be summarized in four points: 1. downsize, 2. save resources, 3. reduce weight and 4. be recyclable. “We also worked on distribution packaging technology in order to improve transport efficiency,” said Kanepackage President, Yoshikazu Kanesaka. “If transporting goods safely were the only consideration then we could simply fill a box with lots of cushioning, but transport efficiency would naturally go down.
Because we’re a company that originally used cardboard and cushioning, we'd be shooting ourselves in the feet to change direction and do away with that altogether. But if we develop replacements, then downsizing and saving resources can be achieved,” he continued with a smile.

Examples of cardboard cushioning. Designed to hold the product with no space wasted.
Designers show off their skills in working one piece of cardboard to raise its protective ability and make it compact.

Eco-packaging is a simple word for something that takes a multitude of forms. If you have 100 products, you’ll have 100 types of packaging.
And the distribution route for each is also different. Some goods go by air, while others make a long journey by ship. While striving for eco-friendly products, the company still has to develop packaging that can withstand the particular environment for each distribution route. This was an unprecedented business development for Kanepackage, but it made the most of its strengths as a comprehensive manufacturer of packaging materials to come up with a succession of remarkable products. For example, by improving the shock-absorbing properties of cushioning used to pack HDDs, they were able to achieve a 50% downsizing for packing the same amount of HDDs. CO2 use was successfully reduced 40% . This cushioning made it possible to double carrying capacity for the same space, which meant lower distribution expenses for the client company, and a large cut in costs.
The cushioning that made this downsizing and weight reduction possible was created by tweaking the materials and using a trick in the surface finishing. The surface of the original cushioning material had corrugations several centimeters deep to mitigate impact when a box is dropped. After refinement, the corrugation depth became less than one centimeter. You might doubt whether this could safely protect the contents of a box at the receiving end of an impact, but “that’s the trick,” said President Kanesaka.
“When we developed a stronger material, we were able to make the partition spacing narrower. We’d been convinced that corrugations several centimeters deep were necessary, but when we tried cutting the wall surface diagonally, the material was stronger even with a thickness of one centimeter. By slowing the speed at which the impact comes, the impact value was lowered.” The company has various types of testing equipment, such as drop testers and rupture testers. For example, when a ship passes through the equator the humidity and temperature inside onboard containers increases oddly.
Packaging for goods transported under those conditions would therefore have to be designed to take failures in adhesion and swelling of paper into consideration, and it would also have to be confirmed that there were no design deficiencies. It is not the packaging company’s responsibility if goods are dropped off a truck while being transported, but a packaging company will produce a design to anticipate this.
“Making products is the manufacturer’s job, but the final finishing-off is the work of the packager. Packaging methods will differ depending on what the product is made of and the position of its center of gravity. Despite this, the time allowed for developing packaging materials is very short, and perfection is demanded on top of that,” said President Kanesaka with a laugh.

Boxless packaging integrates the box and cushioning.
The pinnacle of Kanepackage’s foam cushioning technology is its boxless packaging materials. No exterior box is necessary because the cushioning itself functions as the box. Until now some kind of exterior packaging has been necessary, such as cardboard, EPP cushioning, and individual vacuum trays, but boxless packaging is all in one. Unit price was reduced approximately 15% , and transport CO2 emissions were lowered 70% because of the dramatic reduction in weight. That is a unique property of this material. Sculpting of the box surface enables them to be connected together vertically and horizontally like a puzzle. When boxes are stacked like this it forms a mass that makes it difficult for the load to shift or collapse, and the improved strength means the contents do not break even if a palette is dropped from a truck. It also prevents theft. Apparently there is a surprising amount of theft of new products stacked near ports and airports waiting to be freighted out. But this kind of foam cushioning is made from oil, and there is a limit to natural resources. That’s why the company is now putting effort into recyclable cardboard cushioning.
Cardboard cushioning made from one sheet of cardboard wound round and round will likely be a packaging staple in the near future.

Packaging to send mobile phones to the factory for repairs. The puti puti bubble wrap is folded in two and has a gentle adhesive to hold the phone neatly in place so it won’t move.

Packaging for a Geiger counter. A special film attached inside the lid gently holds the Geiger counter in place when the lid closes.

Cardboard that is quite flat before use but becomes a box in two or three steps: this simple process was applied to reinforced cardboard to make the Cube Shelter. Like a tent, the assembly is not complicated, nor does it take a long time. The shelters can last outdoors for about six months.
The company developed this shelter in 2004 after the Chuetsu earthquake, when they learned of victims sleeping in their cars because evacuation centers were full and developing deep vein thrombosis as a result. Later Kanepackage also developed a series of products for emergency use. And sadly, these products were required this year in the immediate aftermath of the March 11 earthquake. The company donated 20 sets of basic shelters, toilet booths and bowls, and beds, which are probably protecting the lives of disaster victims somewhere even now.

Emergency Shelters Made of Reinforced Cardboard.

This cube shelter for 6people can be assembled in about 4 minutes. Several people can stand on the roof and it won’t collapse. It has been tested to last for 3 months outside, but with a plastic sheet covering could be used for more than 6.

The cardboard is treated with water repellent and is safe even if it gets wet. The bowl lid opens and shuts.
Plastic bags are placed inside the bowl for use.

A 1.2m2 single bed. It folds in two down the middle and can be put away when not in use.