Experience of the 47th election of the House of Representatives on 14 December, 2014 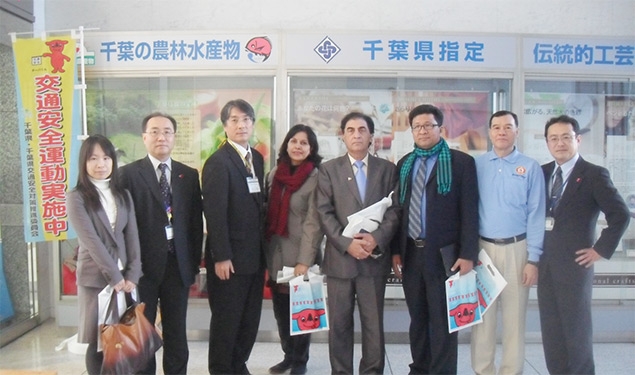 Prime Minister Mr. Shinzo Abe dissolved the Lower House of Parliament and called an election as a mandate on a planned sales tax increase from eight percent to 10 per cent in October 2015. This was decided after a government finance report showed the Japanese economy in recession after two straight quarters of contraction. The poling was seen largely as a referendum on the Prime Minister’s economic reform policies and a test of strength.

Information on the political and election system of Japan was received in the course of several meetings with officials of the South-west Asia Division of the Ministry of Foreign Affairs, Ministry of Internal Affairs and Communication, and the Secretary General of the Election Administration Committee.

Following the meetings, an observation was made in one of the candidate’s election office of the House of Representatives in Tokyo. Prof. Masuyama, Vice President of the National Graduate Institute for Policy Studies (GRIPS) and Professor Iwai also provided a briefing about the Japanese election system at Nihon University.

During the meetings and briefings, several points were highlighted, including that the National Diet of Japan has two chambers, The House of Representative is the Lower House and the House of Councilors is the Upper House. The House of Representatives consists of 480 members. Out of this, 300 members are elected on the basis of single member constituencies and 180 members are elected through a proportional representation system. The tenure of the members is for four years. Japan has a constitutional monarchy system.

Members of Parliament are elected through two different types of election systems. The first one is Single Member Constituencies, and the second one is known as the Proportional Representation System. Elections through the Proportional Representation system in Japan are different to Nepal’s election system where inclusiveness of different indigenous and underprivileged classes of people are not considered and only proportional representation is considered. Information on various aspects of an election, such as voter registration; candidacy; polling system; polling centers; election campaign, and campaign finance have also been received.

The Government of Japan has the system of financing the election. However, remarkably, there is provision for the deposit of a huge amount of money to file for candidacy, and there is a fixed period of 12 days for campaigning, with a restriction on door to door campaigning and poster and pamphlet distribution in cities. A political party should receive a minimum of two percent of the total votes, and they must have at least five parliament members to receive government financing. Candidates have to submit the expenditure details within 15 days of the election. If any candidate is found guilty of any wrong during the election they will be prohibited from participating in elections for the next five years. This ensures candidates strictly follow the norms of the election.
Japanese citizens residing out of country can also cast their votes in the Japanese embassy or mission office where they currently reside. Due to this provision, all citizens are included in the election process. The voters cast their vote by writing the name of the candidate, in the case of the Single Election System, and by writing only the name of the party in the case of the Proportional Representation System. For voting purposes, the voter gets a receipt card at their home beforehand, which they should present to their polling station prior to voting. Visually impaired voters also have the provision to cast their vote in brail characters. The timings for voting may differ according to the location.

The current demographic structure of Japan shows that the largest proportion of the population is elderly, which has been taken into account regarding social security in the Japanese economy. It has been also been noted that the young generation has not shown interest in politics, and, as a result, their participation in elections is decreasing. Therefore, discussions were held to find ways and means to increase the participation of young people in politics. This could, in part, be done as it is done in Nepal, through voting education programs throughout the nation. The other way could be the inclusion of the election and voting system in the curriculum of higher secondary school level courses.

One of the polling stations at Chiba Prefectural Polling Center was visited and the vote counting process was observed in Yakosuka city, Kanagawa Prefecture. The voting procedures and counting system was found to be very simple and convenient. When observing the polling station, it was found to be well managed, systematic, and with qualified election officials. The voters were found happy and quite satisfied with the provision of the voting procedures. Similarly, the counting of votes also was found systematic and efficient. The election was concluded in a free, fair and credible manner.

Likewise, the system of writing the name of the candidate and political party by the voter in the ballot paper and the election or rejection of proposed of judges is also seen as a democratic exercise. In every phase of the election local level bodies are found more active and efficient when they complete the whole election process through different committees.

The total voter turnout in this election was 52.66%, which is less than the earlier elections. A total of 3.2 million votes were invalid. Prime Minister Shinzo Abe’s party, the Liberal Democratic Party, secured 291 seats out of 475, which comes to 61.27%.