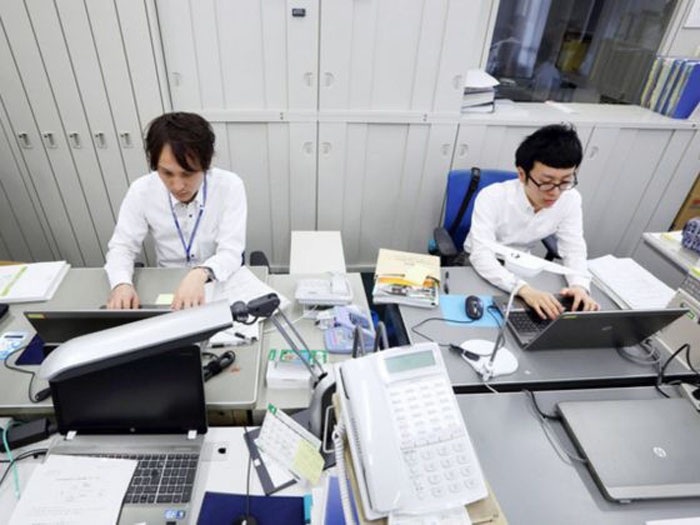 Japan’s working culture is very male-centred, with salarymen under irresistible pressure to match the long hours clocked by their colleagues. This will have to change before female participation in the workforce can increase. Photo: Bloomberg

TOKYO — To overcome the challenges of an ageing population and falling birthrate, Japan needs to change its male-dominated workplace culture to be more pro-family, said Prime Minister Shinzo Abe, whose government yesterday passed a new Bill to encourage the hiring and promotion of women in the private sector.

“The greatest challenge facing Japan is our declining population, brought about by our ageing society and falling birthrate,” said Mr Abe in his opening address at the second World Assembly for Women in Tokyo yesterday afternoon.

He noted that in the past, a higher rate of female labour force participation was the cause of a lower birth rate. But today, many developed nations, particularly those in northern Europe, have a high level of women participating in the workforce as well as a high birth rate.

“Japan also wants to emulate this, but our greatest barrier is a working culture that endorses male-centred long working hours,” he said, referring to the country’s unforgiving work culture, where male salarymen are under irresistible pressure to match the long hours clocked by colleagues, even if the extra hours do not lead to higher productivity.

“If men themselves do not awaken to this fact and take action, we will not be able to eliminate this bad practice,” added Mr Abe, whose administration has been pushing for a more efficient and family-oriented corporate culture.

That, however, will not be enough if Japanese companies do not provide a work environment where it is easy for employees to take childcare leave and for women to take on leadership positions, he said.

“Husbands must also actively take childcare leave and couples share responsibility for household chores and child rearing. We will make this the ordinary practice in Japan,” he added.

“The dynamic engagement of women will also enrich men’s lives.”

Since coming to power in December 2012, Mr Abe has been pushing for a greater role for women in Japanese society and internationally. Last year, Tokyo adopted a policy to increase the percentage of newly hired female civil servants to at least 30 per cent. That target has been achieved for new hires in managerial career track, said Mr Abe yesterday, with the percentage of women hired going up by 10.4 percentage points to 34.3 per cent.

As for companies in the private sector, they are now required to include information in company reports about the ratio of female board members.

A new Bill passed yesterday will also require companies to draw up and announce voluntary action plans incorporating numerical targets for promoting the hiring of women and the appointment of women to board positions. The law will come into effect in April 2016.

“This is the first step towards women into positions that have decision-making authority,” said Mr Abe. He added that his government will also support women who want to start their own businesses.

Noting that the percentage of Japanese businesses founded by women remains lower than 20 per cent, and that the number has decreased constantly for more than a decade, he said: “I will bring about a rebound in the figure. We will run courses to cultivate female entrepreneurs and other coursework useful in founding businesses in areas all around Japan.”

Mr Abe added that his government will continue to support a greater role for women, not only in Japan but internationally. In the next three years, Tokyo will provide overseas direct assistance of more than ¥2 billion (S$490 million) toward education for women and girls. Mr Abe said he will also push the women’s agenda vigorously at next year’s Group of Seven (G7) summit hosted by Japan.

The two-day World Assembly for Women is attended by hundreds of world leaders, officials and activists. Speakers include Liberian President Ellen Johnson Sirleaf, Chairman of Lockheed Martin Marillyn Hewson and former Prime Minister of New Zealand Helen Clark, who is now the Administrator of the United Nations Development Programme.