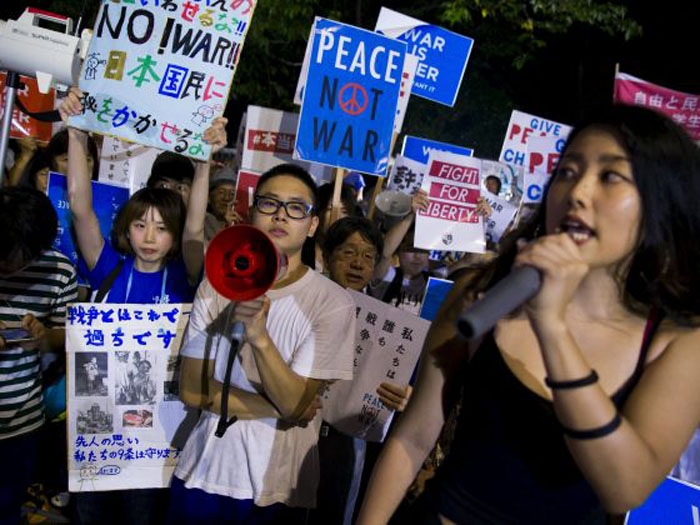 Groups of student activists has emerged in a fresh front to protests against Prime Minister Shinzo Abe's push for a more robust defence policy. Photo: Reuters

TOKYO — Prime Minister Shinzo Abe’s push to pass new security bills in Parliament that could pave the way for Japan’s Self-Defence Force to engage in combat for the first time since World War II has met with fierce domestic opposition, but critics of the government miss the larger point of the need for Japan to respond to new security dynamics in the region, says a prominent Japanese scholar.

“People are even arguing that the Abe administration is quasi-revising the constitution to define Japan as a more aggressive nation. I’m very much against this view,” said Dr Ken Jimbo, a senior fellow at Japan Foundation who studies Asian security issues, in an interview with regional journalists in Tokyo this week.

He noted that Japan now faces a new security environment that is marked by frequent intrusions of Chinese Coast Guard vessels in waters off the south western coast of Japan, particularly around the disputed islands of Senkaku (Diaoyu in Chinese).

These are what Tokyo has described as “grey zone” incidents or non-military violations of maritime boundaries which threaten its administrative control of the islands.

Currently, Japanese vessels patrol the waters around the area but Tokyo does not maintain a physical presence on the disputed isles, Dr Jimbo explained.

“What if they (China) override the status by sending hundreds of ships near the Senkaku islands? That can happen any time,” he said, noting that four to five China Coast Guard ships patrol the vicinity at any given time. “Probably in 2020, that can be 20, 30 or 50. And China can then claim it without using any kind of military force. So we need to step up the frequency of our patrols … and prepare for escalation measures (by the Chinese).”

The new security bills would make it easier for the SDF to respond to such grey zone incidents, he explained. But emphasising the role of the military in the territorial dispute can heighten tensions and increase the risk of armed conflict, he warned.

“That will give China an excuse to say that you’re signalling that you’re escalating tension and we will respond. So what we want is to field non-military forces as much as possible,” said Dr Jimbo, who is also an Associate Professor at Keio University. He added that Tokyo wants a stronger security commitment from Washington on grey zone incidents, but America appears to be reluctant to do so to prevent further complicating Sino-American ties.

“We are not happy with that … because what will be the next step for China? They will expand the grey zone as much as possible,” said Dr Jimbo.

The security bills were passed by a lower house panel in July, sparking a huge demonstration near parliament. The bills are now with the upper house, where opposition parties can delay a vote although the ruling bloc has a majority.

If no vote is held within 60 days, they return to the lower house, where Mr Abe’s coalition can enact them with a two-thirds majority.

The bills also expand the scope for Japan's military to provide logistics support to friendly countries and relax limits on peace-keeping operations.

Opponents say the revisions could entangle Japan in US-led conflicts around the globe and violate pacifist Article Nine of the US-drafted, post-war constitution.