How Tokyo deals with inundation 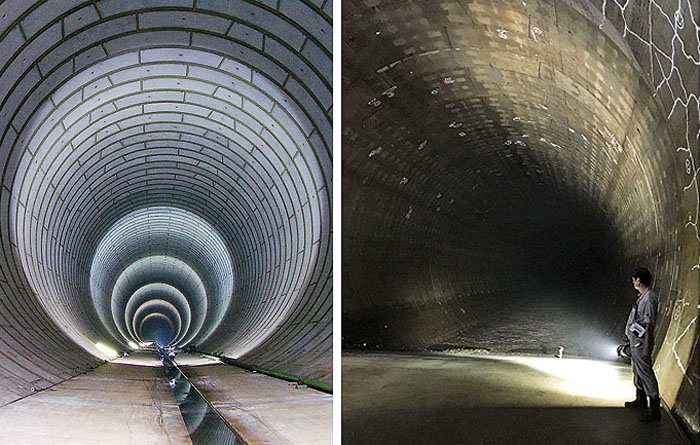 (left:The underground tunnel of the Kanda River/Loop No 7 Underground Regulating Reservoir after its completion (right)A personnel of the facility shines his flashlight into the dark depths of the tunnel during the media tour

FLOODS can cause a great deal of damage to populated areas, especially if these areas are also situated nearby or within the basin of a river system.

The entire length of the river also lies within Tokyo.

In the past before the areas within the basin were urbanised, floods posed little threat as there were fields to absorb the water back into the soil.

But as urbanisation took off and the fields were paved to make way for roads and residential areas, the overflow of water from the Kanda River could not be absorbed back into the ground as easily. 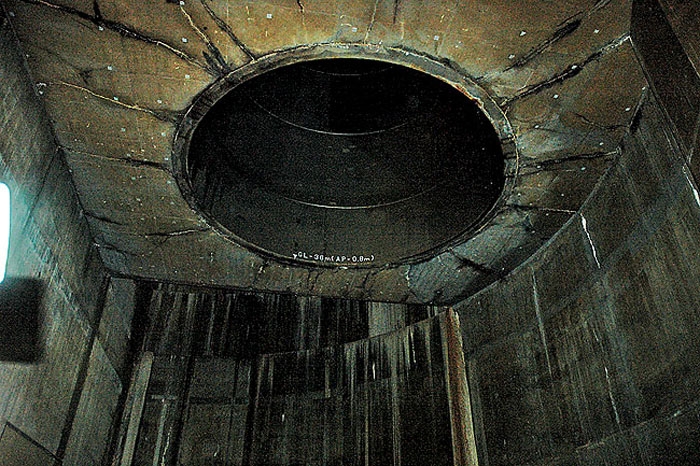 In September 1958, the Kanogawa Typhoon caused major flood damage in the Kanda River System with 1,194 hectares of land and 38,356 houses inundated.

There were several other major flood damages caused by typhoons and overflowing of the river throughout the years and in response, the Bureau of Construction Tokyo Metropolitan Government built a regulating reservoir in a section of an underground river known as the ‘Loop Road No 7 Underground River’ project.

The project, which took 20 years to complete – the first 10 years for ‘Stage 1’ and the latter 10 years for ‘Stage 2’ – involved the construction of a 4.5km long underground tunnel with a 12.5m inner diameter beneath the area of Loop Road No 7 that can store approximately 540,000 cubic metres of floodwater taken from three intake facilities on the Kanda River, Zenpukuji River and Myoshoji River.

The Kanda River/Loop Road No 7 Underground Regulating Reservoir comprises three main facilities, the first of which is the Intake Facilities where floodwaters from rivers are gu-ided into the underground tunnel; the Regulating Reservoir Tunnel where the inflowing floodwaters from the Intake Facilities are reserved and temporarily stored and the Control Building, a facility which operates, controls and monitors water inflow and discharge facilities.

On August 27, 1993, Typhoon No 11 caused significant flood damage in the middle basin of the Kanda River, with a total rainfall of 288mm which inundated 85 hectares of land and 3,117 houses.

During the aforementioned time, the underground rese-rvoir has not been constructed yet.

On October 9, 2004, Typhoon No 22 with a total rainfall of 284mm hit the same area as Typhoon No 11, but because the construction of the underground reservoir was already half-way through Stage 2, the amount of flood damage reduced significantly.

Only four hectares of land and 46 houses were inundated when Typhoon No 22 hit.

The reservoir system works like clockwork to make sure that the floodwaters don’t overflow the river.

The three intake facilities on the three main rivers of the Kanda River System will open its gates to take in large amounts of water once the water level on the rivers reach a certain level.

The water is then pumped into the underground reservoir and stored until the water level in the rivers return to normal.

The collected water is then pumped back out into the river. So far there has never been an instance where both the underground reservoir and the rivers’ water level are filled to full capacity.

The underground facilities, which are built 43m under-ground, are also earthquake resistant and is periodically maintained.

The facility personnel will keep an eye out for any cracks that form on the tunnel walls and during the winter or dry seasons the tunnel will be cleaned out.

Sediments that form on the tunnel floor are cleaned out to prevent blockages and any fish found in the gutters of the tunnel are returned to the river.

Since the underground facility is so deep underground, it takes nearly a minute to reach the facility with an elevator and the temperature inside the tunnel is a constant 18 degrees Celcius.

Despite being such a big operating facility, it is almost left unmanned.

This is because the facility runs automatically and on a normal basis the personnel will only come into the facility once or twice a week.

During the typhoon season, there will be personnel stationed at the facility just in case.

The success of the under-ground reservoir system in the Kanda River basin has led to several more of the projects being built around other parts of Japan, with several underground reservoirs in Osaka.

The total cost for the building of the Kanda River/Loop Road No 7 Underground Regulating Reservoir was over 101 billion yen. 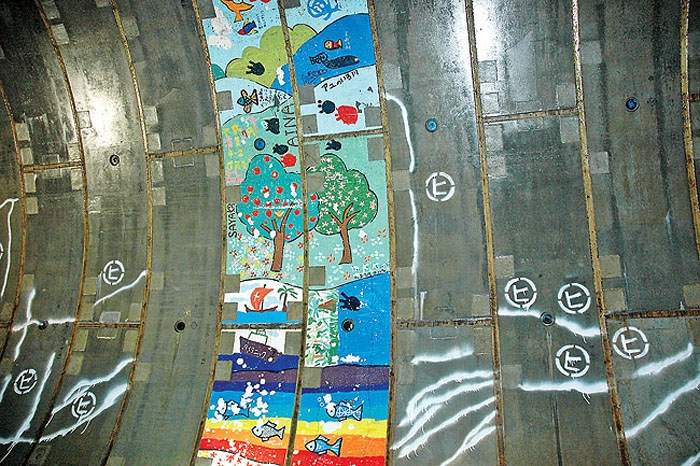 During construction of the tunnel segments, children of the community were asked to decorate some of the tunnel segments at its manufacturing factory before it was transported to the building site and installed. The white marks around the children’s artistic mural are markers where tiny cracks were found and maintained by facility personnel 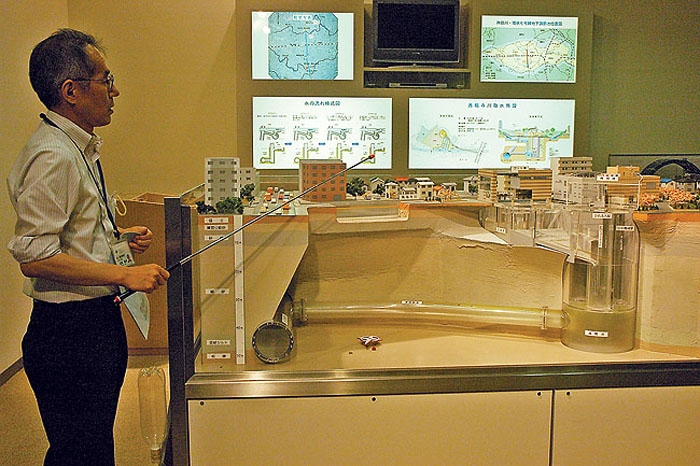 With the aid of a model version of the facility, the media got to see how it functions – Courtesy of Bureau of Construction Tokyo Metropolitan Government

Originally published on The Borneo Bulletin on Sep. 12th, 2015.